#MeToo is a symptom of the problem, not the cure. 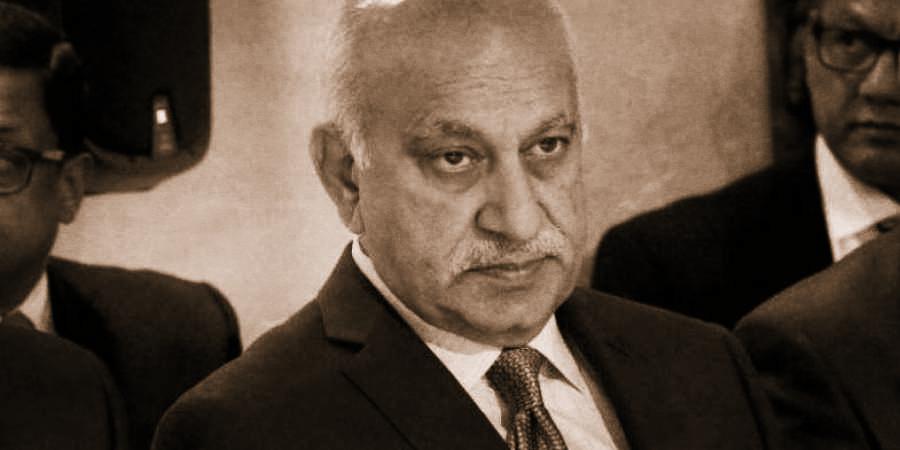 This is the age of absolutes. Absolute majorities, totalitarian governments and extremist ideas that allow for no difference of opinion. In this age of absolutism, ideas and thoughts that thus far identified themselves as ‘liberal’ have fallen prey to the same extremism. Liberalism was generally understood as a political philosophy that prioritised liberty and equality, and sought to strike a balance between individual liberty and the power exercised by society and the state over an individual. Freedom to express and defend ideas that may not find favour with the majority is at the core of liberal thought. But today’s “liberals” are so vehemently opposed to points of view different from their own that they are no different in political posturing from their sworn opponents from the religious or political right.

The recent furore created by the ‘liberal’ junta over M.J. Akbar’s decision to seek legal redress and the heckling they directed at his lawyers Karanjawala & Co. for defending him demonstrate that no matter who has power at any given moment, due process is always the first to be sacrificed. After reading the moving testimonies and judging just by their sheer number, we may each be personally convinced of Akbar’s guilt. But we must realise that our personal conviction is not a substitute for due process. “Every woman must be heard” is the cry of the moment. And be heard she must. But we must not lose sight of the legal maxim audi alteram partem, which is the bedrock of our legal system and a principle of natural justice. It means ‘hear the other side too’.

Also read: #MeToo Is About an Individual’s Rights but Is Far Larger Than a Single Person

If you join the dots, an ugly and dangerous pattern starts emerging that cuts across political ideologies. That of people holding their personal convictions to be above the law. Preventing lawyers from representing a person or position that is unpalatable to the majority might begin with the Jyoti Singh case, but it is not long before it transforms into protest marches in Kathua. Condemning a person as guilty before the trial commences may start with Ajmal Kasab but quickly spirals into attempts to lynch Kanhaiya Kumar outside court for being an anti-national. Let us once and for all disabuse ourselves of this idea that there exists a crime so heinous that it does not deserve to be defended. The law laid down by the Supreme Court on this subject is unequivocal – “Every person, however wicked, depraved, vile, degenerate, perverted, loathsome, execrable, vicious or repulsive he may be regarded by society, has a right to be defended in a court of law and correspondingly it is the duty of the lawyer to defend him”.

It is not the fact of taking up a case on which a lawyer must be judged. It is how he or she conducts the case. The lawyers who appeared for Hadiya’s father were not villains because they took up a cause some of us may disagree with, what was despicable were the arguments they made in court claiming her conversion was the result of an international conspiracy by Muslims to “psychologically kidnap” Hindu girls and send them to Syria for jihad. Karanjawala & Co. are not to be judged by virtue of having taken up an unpopular brief. Their adherence to legal ethics will be tested in the kind of arguments they make in court. We will have to wait to see if they indulge in slut shaming or any other kind of character assassination, or take defences of consent that ignore the power imbalance between M.J. Akbar and his victims and the fiduciary position he exploited. And to be clear, this is not an argument in support of the “cab rank rule” that does not allow lawyers to refuse a brief but in support of free choice. It is the same free choice on account of which Indira Jaising cannot be faulted for returning Talib Hussain’s brief. If she believes that on account of her personal convictions, she can no longer do justice to his brief, she is perfectly justified in recusing herself.

Also read: #MeToo Memories and Our Citadels of Power

As far as the merits of the case go, publishing an imputation concerning a person with the intention of harming their reputation is the very definition of defamation under Section 499 of the Indian Penal Code. No one raised an alarm when the Supreme Court dismissed the challenge to the constitutional validity of Section 499 in Subramanian Swamy vs Union of India saying the right to reputation was a part of the right to life and “reputations cannot be allowed to be sullied on the anvils of free speech”. Now that the law is still on the statute book, Akbar has a legal right to invoke it. Whether or not the #MeToo posts qualify as defamation will depend on whether any of the exceptions to defamation can be successfully invoked. And there are several. For instance, a statement which is true and made for public good is excluded from the crime of defamation, as is an imputation made in good faith to protect the interests of the self or another. We hope that the courts will interpret these provisions to safeguard the interests of victims. Or perhaps these cases will become the occasion for the constitutional validity of Section 499 to be reconsidered. But it is imperative that we go through the motions of due process so that the justice delivery system can evolve with the times instead of remaining an outmoded bystander.

No doubt the problem is complicated by the fact that the #MeToo movement is a result of the failure of due process. It is the direct consequence of years of inability of the legal system to provide redress or even an environment where women feel safe seeking legal recourse. Despite this, we must not lose sight of the fact that the #MeToo movement is a symptom of the problem; the error lies in seeing it as the cure. The solution to the failure of due process is more stringent adherence to due process, not less. The churning that the #MeToo movement is causing is much needed and for the better, but it must result in evolution of the mechanisms of justice delivery. To see it as justice in itself is wrong too. We must understand the philosophical and practical limitations that the legal system faces in acknowledging itself to be a failure. And it is in no one’s interest for the legal system to accept that it has failed since that would amount to a revocation of the Lockean social contract.

We must remember that when vigilante justice becomes the substitute for due process, it is the more powerful and more numerous of society who will win each time. It may win us a battle but will start a monster that will defeat us in the war against intolerance and hatred. Let us not forget that we as a country took a decision to do away with jury trials after a jury swayed by public sentiment forgave Nanawati for the honour killing of his wife’s lover in 1959. If we take it upon ourselves to pronounce M.J. Akbar guilty, we must also brace ourselves for the acquittal of Shambhulal Regar of the video recorded murder of Mohd Afrazul which will soon follow in the natural course as a sequitur to the crowd-sourcing of justice.

We must rethink the standard of proof to be applied by a complaints committee hearing a sexual harassment complaint, delink the complaint redressal system under the Sexual Harassment of Women at Workplace (Prevention, Prohibition and Redressal) Act, 2013 from the criminal justice system so that a victim retains the choice not to set the criminal law in motion, set time frames within which decisions have to be given, provide for counselling to victims and sensitisation training to their co-workers. But whatever we do, we must not for a moment labour under the impression that we have found a justice delivery system outside of and above the law.

There are some questions that still remain to be answered that no court will provide us a reply to. Why did Karanjawala & Co. use a standard vakalatnama with names of all the lawyers in the firm? Was it to intimidate the victim with a list of 97 lawyers? Or could it be because lawyers look to standardise as much of their paperwork as possible to reduce turnaround time? Or perhaps it was because law firms often face high attrition rates and at times entire teams are poached by rival law firms, so this is just one way to avoid having to chase ex-employees for no-objections for change in vakalatnama? Then again, there are several other such questions that nobody is asking. The time has come when the nation should want to know why lawyers copy and paste boilerplate phrases in their drafts. Why does every petition filed in court begin with “most respectfully showeth”? Is it to intimidate the judges with antiquated verbiage or is it because if you showeth me a petition I will shew you a lazy profession that is still recycling its drafts from petitions submitted before the Privy Council during the time of Victoria, Empress of Hindoostan? Why do all our petitions end with a “prayer” to the court? Shouldn’t they end in a demand for rights guaranteed to us under the constitution? Is it just blind continuation of colonial practices or are we still grovelling at the feet of Law Lords of the Courts to deign to bestow justice as largesse if they deem fit and are feeling in good humour? Actually, let’s leave out this last bit. That question may yield an uncomfortable answer.