The contrasting actions by the police after a stone-pelting incident at a Ram Mandir donation rally and attacks on Muslim houses in Mandsaur can only come from their desire to not antagonise their political benefactors. 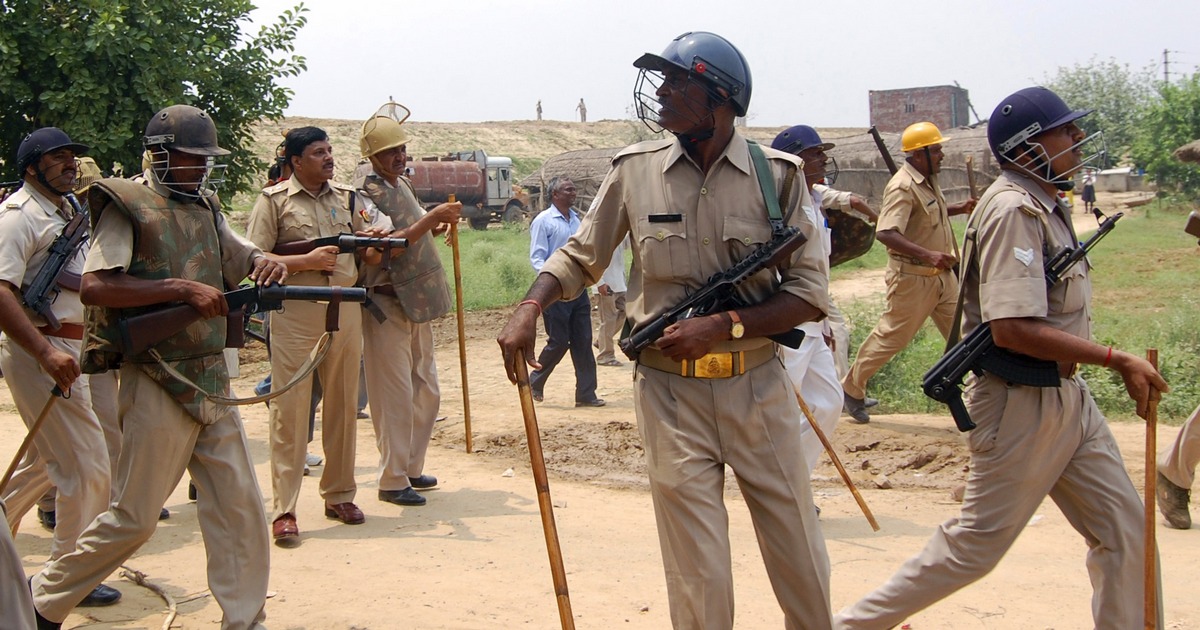 Certain organisations have decided to launch a fundraising campaign, called ‘Sri Ram Janmabhoomi Mandir Nirman Dhan Sangrah Abhiyan’ for the Ram Mandir in Ayodhya from January 15 in Madhya Pradesh. Volunteers will collect donations through cash and cheques during the door-to-door drive and distribute literature related to the Ram Janmabhoomi movement along with photos of the temple’s design.

Processions can be taken out as provided in Sections 30/30A of the Indian Police Act, 1861, with the police imposing such conditions for regulating them as deemed necessary.

Supreme Court guidelines on how processions must be regulated

The guidelines on how processions must be regulated were laid down by the Supreme Court in 2004 in the case of The Commissioner of Police & Ors. vs Acharya Jagdishwarananda Avadhuta & Anr after a 14-year-long legal battle. In this case, the Anand Margis were permitted to take out a procession and perform Tandva dance with skull, Trishul (trident), knife, damroo, and sword (by a few) subject to the following terms and conditions:

When they acted, it was with ‘illegal’ and ‘revengeful’ vengeance

Preceding the ‘Sri Ram Janmabhoomi Mandir Nirman Dhan Sangrah Abhiyan’, there were some incidents of stone pelting on vehicle rallies taken out in western Madhya Pradesh by some groups to raise awareness about the construction of the Ram Mandir. The stone-pelting was reportedly triggered by the alleged use of abusive language by those in the rally.

Following one such incident in the Muslim dominated Begum Bagh, Ujjain on December 25, the house of one Abdul Rafeeq was razed by the administration that came looking for suspects in the stone-pelting incident caught on video the previous day. Officially, the structure was demolished because it was illegal.

The act of demolition was sharply criticised by the former Supreme Court Judge Deepak Gupta who called it “absolutely illegal and an act of a police state”. “This is a mockery of the rule of law. There is no power to the police to demolish structures like this,” Justice Gupta said.

Government officials tried to whitewash the atrocity by arguing that the structure was allegedly illegal. However, their real intentions were inadvertently betrayed by the district collector Asheesh Singh who said the demolition drive was meant to hurt “criminals who resort to such acts of stone-pelting” economically.

This means that the demolition was a revengeful act by the administration, intended to hit the poor Muslims where it would hurt most. There are thousands of illegal structures of almost every community in every town. Do they go on demolishing them with equal alacrity and enthusiasm? Their intentions are so obvious that no further comments are necessary.

An NDTV investigation on the ground found that in matters of arrest also the police response has been largely one-sided with most of the arrested being Muslims.

Otherwise, they had no shame in their ‘deliberate cowardice’

In another incident on December 29 in Dorana village, district Mandsaur, many people taking part in a rally went on rampage, breaking open houses and looting, targeting the 82 houses of the Muslims out of some 500 houses there.

A nearly 100-strong police contingent replete with six inspectors, one DySP and one AddlSP, opted for ‘disgraceful inaction’, watching the rioting as if, in their spiritual ascent, they had risen above all such lowly emotions of hatred and violence. No force at all was used to disperse the rioters. Incidentally, a Muslim constable Nazar Mohammad Mansoori, was obliged to watch his house ransacked, vehicles damaged, and his brother’s grain shop looted over a video that was shared amongst Whatsapp groups.

The rally had some 5,000 men armed with swords, sticks and stones, and saffron flags. The SP (superintendent of police) admitted to the presence of swords though he denied the use of firearms, even as a woman Shakira Bi claimed that some rounds were fired in the air by the rioters. They chanted slogans and played music on loudspeakers.

We can see how the guidelines prescribed in the case of The Commissioner of Police & Ors. vs Acharya Jagdishwarananda Avadhuta & Anr were flouted with complete impunity. The police were either unaware of the orders of the Supreme Court or chose to ignore them in their sympathy with the men in the rally.

Some rioters climbed atop the minaret of the local mosque and planted a saffron flag on it as if they had ‘conquered’ it. The video was widely shared over social media.

A day before, villagers had petitioned the SP and sought protection, citing messages, including one, which allegedly urged people to teach the ‘descendants of Aurangzeb’ a lesson because, on December 25, they had stopped them from playing loud music in front of the mosque.

However, as expected, no reassuring action was taken by the SP and fearing sexual assaults, the Muslims were forced to send their women on the rally day to another village for safety. The men had to stay back to defend their property.

The SP Siddharth Choudhary gave a clichéd argument, “It was not advisable to use force to control the situation and so we ensured that they exited soon.” He seemed to be quite happy with the fact that they could remove the saffron flag planted on the mosque and that ‘nothing happened to the mosque’.

In other words, he would like us to believe that they did not use any force to disperse the rioters because it could have escalated matters. This is not acceptable.

A 100-strong police contingent is more than adequate to deal with a crowd double that size also, even without killing people. There is no rioter in the country who could continue rioting after the police have fired a couple of rounds in the air and made their intentions of upholding the law clear. The intention part is important. Rioters must know that police mean business and if push comes to shove, they can shoot to kill also.

The ‘deliberate cowardice’ of the police in not using any force to disperse the rioters could only come from their desire of not antagonising their political benefactors.

If they did not have non-lethal weapons with them, it was their mistake. Such naiveté, given the history of communal strife in the state, is unpardonable.

If they claim that they had no intelligence about the rioters’ preparations for violence, it is a failure of the state intelligence for which the police’s top brass is squarely and principally responsible.

As far as the ‘failure’ of the police is concerned, the affiliation of the rioters is immaterial. It does not matter whether they are found to belong to the VHP (Vishwa Hindu Parishad) or not. In the eyes of the law, they were rioters who warranted action.

If the police really want to ascertain truth, it is always possible

When two sides make claims and counterclaims as to who started the fight first and who threw the first stone, it is admittedly difficult to ascertain the truth from mere statements of witnesses, as they are all likely to be lying. The only way to ascertain the truth, at least in future, is to ensure that all rallies are necessarily accompanied by a small police contingent, which also makes a video recording of the happenings, which is automatically rendered tamperproof.

It must be kept in mind that given their numerical inferiority and the preparation made by the other side, along with the history of outcomes of previous riots, it does not make sense for the Muslims to first start a riot and then suffer disproportionately in it.

Still, to be fair, at this stage, I do not intend to give a certificate to any one side.

Possibility of false flag operations or deliberate precipitation of violence

There is indeed a possibility of riots having been deliberately precipitated by some people present in the rally or even amongst the police. At this stage, we obviously do not know who is to be blamed but I must educate the readers that mischiefs of this type are also possible,

I must inform those who might get alarmed at such a possibility that this is an old technique. In intelligence parlance, they are known as False Flag Operations. In such operations, one commits an act in such a clever manner that the actual source of responsibility is effectively concealed and blame is pinned on somebody else. Agent provocateurs have been used since long to infiltrate protest movements and discredit them by precipitating violence and mayhem.

There are many examples of False Flag operations in history. Four weeks after Hitler was sworn in as chancellor of Germany in 1933, there was an arson attack on the Reichstag building, home of the German parliament in Berlin. Many historians believe that the Nazis did it themselves and blaming the communists for this, used it as a pretext to crack down on them and suspend most civil liberties.

In the Lavon affair in 1954, the Israeli military intelligence employed a group of Egyptian Jews to plant bombs inside Egyptian, American, and British-owned civilian targets and throw the blame on the Muslim Brotherhood and Egyptian Communists, etc. so as to induce the British government to retain its occupying troops in Egypt’s Suez Canal zone.

Closer home, a human rights movement called Citizens for Justice and Peace has reported in connection with the anti-CAA protests that, according to local people in Firozabad, the police were accompanied by men in plainclothes who had their faces covered. These men provoked the crowd by hurling abuses and stones at them. It is not known exactly who fired the first shot but things escalated and eventually, seven people were killed.

Life term for stone pelting; is he serious?

Shivraj Singh Chouhan has said that a stringent law with a provision of life imprisonment would be enacted to curb the incidents of stone pelting in Madhya Pradesh. Since the statement came in the wake of recent incidents of violence and stone pelting during recent rallies of right wing organisations, the target of the law must be clear. It will also have provisions to confiscate the property of those involved in stone pelting.

The punishment proposed is so outrageous that it would be wastage of effort to comment on it. If the trend continues, perhaps we might see a return of the colonial-era caning also. Way to go!