The RJD chief was convicted by a CBI court on March 19 in a case relating to fraudulent withdrawal of Rs 3.76 crore. 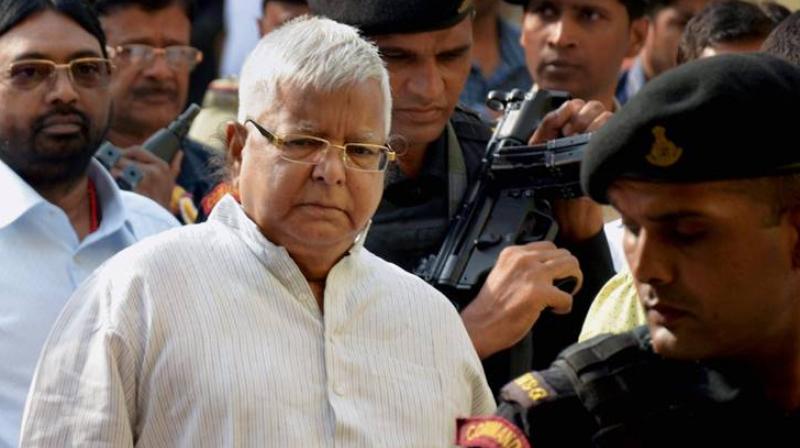 New Delhi: A special CBI court on Saturday sentenced former Bihar chief minister and Rashtriya Janata Dal (RJD) leader Lalu Prasad to 14 years of imprisonment in the fourth fodder scam-related case. According to a report in The Indian Express, Lalu was convicted  under 120-B (criminal conspiracy), read with 419, 420, 467, 468 (pertaining to cheating, forgery etc) of Indian Penal Code and Prevention of Corruption Act. In addition, the RJD leader also has to cough up a whopping Rs 60 lakh fine.

Prabhat Kumar, Prasad’s counsel, told the media that Lalu will appeal against the judgment in a higher court.

On March 19, Lalu was convicted by a special CBI court in Ranchi in connection to the fourth fodder scam case. Of the 31 accused, 19 were convicted and 12 acquitted. Bihar’s former Congress chief minister Jagannath Mishra is among those who have been acquitted.

Pointing to a threat to his father’s life, Lalu’s son Tejashwi Yadav, according to a report in Indian Express said, “He is a victim of a political conspiracy of BJP and JD (U).” In light of today’s sentencing, RJD has summoned an emergency meeting of its senior leaders.

The severe court sentence comes at a time when Lalu was hoping to revive his party in Bihar. Political analysts believe that the task of rebuilding the RJD now rests on Lalu’s son Tejashwi Yadav.

The massive fodder scam was exposed in 1996 following at Bihar’s Animal Husbandry Department. Lalu was first convicted on September 30, 2013, in Chaibasa treasury case, involving fraudulent transactions to a tune of Rs 37.70 crore.Though served with a five-year jail term, Lalu was out on bail after spending just 77 days in prison. Trouble resurfaced four years later when when a special CBI court on December 23 convicted the Mandal leader in the second scam related to a fraudulent withdrawal of Rs 89.27 lakh from the Deoghar treasury. This time, the RJD chief was sentenced to a little over three years of imprisonment.

A month later on January 24, another CBI court convicted and sentenced him five years of imprisonment in Chaibasa treasury case related to the fraudulent withdrawal of Rs 33.13 crore.

Since then Lalu has been serving out his sentence in Ranchi’s Birsa Munda Central Jail. Currently he is in Ranchi hospital on health grounds.

The scandal came to light in 1996 following a raid conducted by the Deputy Commissioner of Chaibasa, Amit Khare, at the Bihar Animal Husbandry Department.

In 1997, Lalu Prasad was charged under the Prevention of Corruption Act in connection with the fodder scam. The CBI, which was probing allegations of embezzlement of treasury funds to non-existent companies for purchase and supply of cattle fodder in Bihar, had found alleged irregularities worth Rs 950 crore. The scam forced Lalu, then CM of the state, to resign. It was during this period that he disassociated himself from the Janata Dal and formed his own party, the RJD. On resigning, he installed his wife, Rabri Devi as CM. In total, the CBI has filed 63 cases under IPC Sections 420 (forgery) and 120 (b) (criminal conspiracy) and Section 13 (b) of the Prevention of Corruption Act.

Here is a list of all fodder scam cases:

First fodder scam case: Lalu Prasad Yadav was convicted in the first fodder scam case in 2013 and awarded five years in jail. The court charged the RJD chief with fraudulent withdrawal of Rs 47 lakh from the treasuries at Banka and Bhagalpur districts, where alleged forged and fake bills were drawn by the Animal Husbandry Department in 1995-96 when he was the CM. Among the 45 other convicts were former chief minister Jagannath Misra.

The conviction also barred Yadav from contesting elections for 11 years in line with the Supreme Court order disqualifying convicts jailed for more than two years from contesting for six years after completion of their sentence. Later, he had got bail in the case.

Second fodder scam case: Months after the Grand Alliance collapsed and JD(U) chief Nitish Kumar joined hands with the BJP to form a new government, Lalu Prasad Yadav was convicted in a second fodder scam case on December 23, 2017. The case pertained to fraudulent withdrawal of money to the tune of over Rs 89 lakh from Deoghar treasury between 1991 and 1994 when Yadav was the chief minister and also handled the finance department.

He was sentenced by a special CBI court to three-and-a-half years of rigorous imprisonment, even though former CM Jagannath Misra was acquitted. Yadav was also imposed a cumulative fine of Rs 5 lakh in connection with charges under the Indian Penal Code and Rs 5 lakh pertaining to charges under the Prevention of Corruption Act.

Third fodder scam case: A month after he was convicted in the second fodder scam case, Lalu Prasad was pronounced guilty in the third case on January 25, 2018, which pertains to withdrawal of funds to the tune of Rs 37.62 crore from the treasury of West Singhbhum (Chaibasa) — now in Jharkhand – in 1992-93. Jagannath Mishra was also convicted. Both Lalu and Mishra were sentenced to five-year rigorous imprisonment under various sections of the IPC and the Prevention of Corruption Act, along with a cumulative fine of Rs 10 lakh.

Fourth fodder scam case: A special CBI court in Ranchi, on March 19, 2018, pronounced Lalu Prasad Yadav guilty in the fourth fodder scam case pertaining to alleged fraudulent withdrawal of Rs 3.5 crore from the Dumka treasury (which is now in Jharkhand) over two decades ago. The court, however, acquitted Jagannath Mishra in the case.

Fifth fodder scam case: A special CBI court will pronounce its judgment in the fifth fodder scam (Doranda treasury) case in the coming months. The case relates to fraudulent withdrawal of around Rs. 47.5 crore from the Doranda Treasury in the 1990s.