Kerala Govt Running 65% of Shelter Camps for Migrants After Lockdown: Centre to SC

In response to a PIL, the Centre said that 47% of the 6.3 lakh migrant workers being sheltered in government run-camps are housed in Kerala. 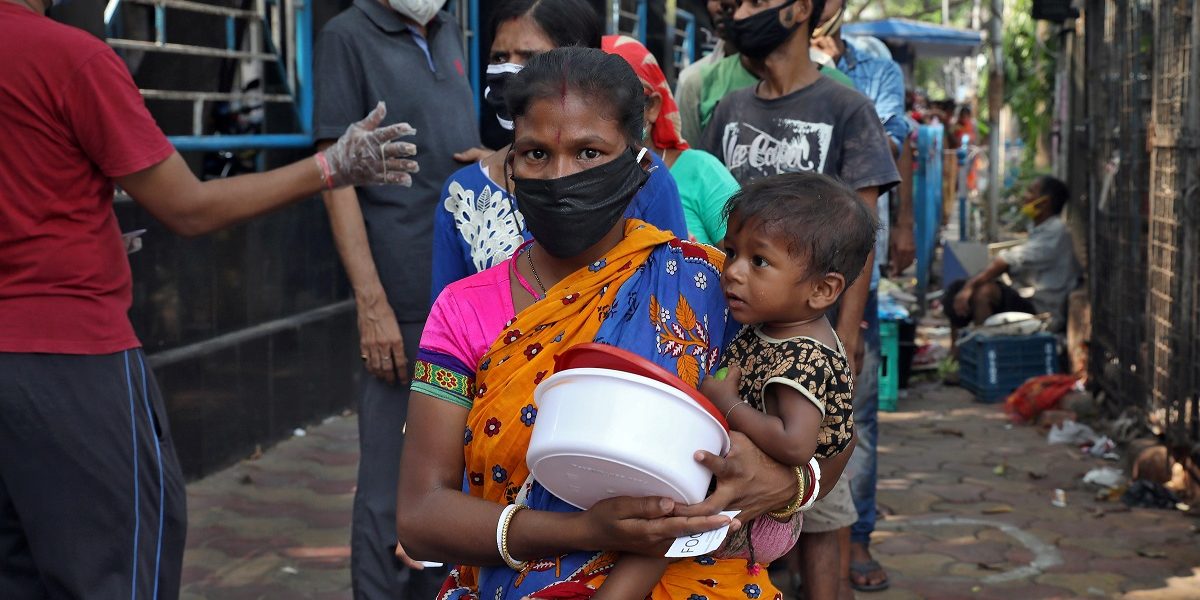 A woman and her child wait to receive food during a 21-day nationwide lockdown to slow the spreading of COVID-19 in Kolkata, April 3, 2020. Photo: Reuters/Rupak De Chowdhuri

New Delhi: The Centre has told the Supreme Court that out of the 6.3 lakh migrant workers being sheltered in government run-camps, around half – 47% – are housed in Kerala. The southern state is also running 65% of the shelter camps in the entire country.

This was included in a status report filed by Ministry of Home Affairs in the Supreme Court on Tuesday showing the steps taken by the Centre and state governments to ensure the welfare of migrant workers in over 578 districts.

The ministry’s report was in response to court proceedings in public interest litigation on the plight of migrant workers. The hearing was largely based on a petition filed by activists Harsh Mander and Anjali Bharadwaj, who had claimed that the declaration of a 21-day nationwide lockdown without a notice period had precipitated an unprecedented humanitarian crisis with migrant workers walking back en masse out of cities to their hometowns and villages.

The Hindu reported that the Centre’s affidavit stated that the Kerala government is running 15,541 camps, followed by Uttar Pradesh government at a distant second with 2,230 camps.

The newspaper reported that the home ministry had stated that across the country, the state governments are running 22,567 camps and relief shelters, which was catering to 6.3 lakh workers. Additionally, non-governmental organisations were operating 3,909 camps which have sheltered over 4 lakh migrant labourers.

Also Read: The Invisible Virus and the Struggles of India’s Invisible People

Following the submission of the report, Communist Party of India (Marxist) leader Sitaram Yechury took to Twitter, pointing out that even the Centre’s status report has shown that the Left front state government in Kerala was at the forefront of providing welfare to migrant workers from outside the state.

The MHA status report also claimed that besides operating camps, governments gave food to over 54 lakh migrant workers in 7,848 food camps, while NGOs distributed food packets to over 30 lakh labourers in 9,473 camps. Besides, employers and private industry were also giving shelter and food to 15 lakh stranded workers.

“The Centre and State governments are doing their best strategising human resources and other resources to come out of this unprecedented global crisis,” the MHA affidavit said, as per The Hindu.

The MHA also criticised the filing of the PIL highlighting the plight of migrant workers for diverting “energy and attention” of the executive.

“It deserves to be pointed that when the country is facing such unprecedented crisis, filing of such petitions and attempting to sit in appeal over all actions taken by the respective governments by a few individual needs to be discouraged as it diverts energy and attention of the statutory functionaries which ought to have been utilised to its optimum in discharging their duties on ground,” the affidavit said.

The case was listed for further hearing on April 13.