The clashes broke out when protesters forced the closure of shops in the Beconganj area to protest against BJP leader Nupur Sharma's allegedly offensive remarks on Prophet Muhammad. 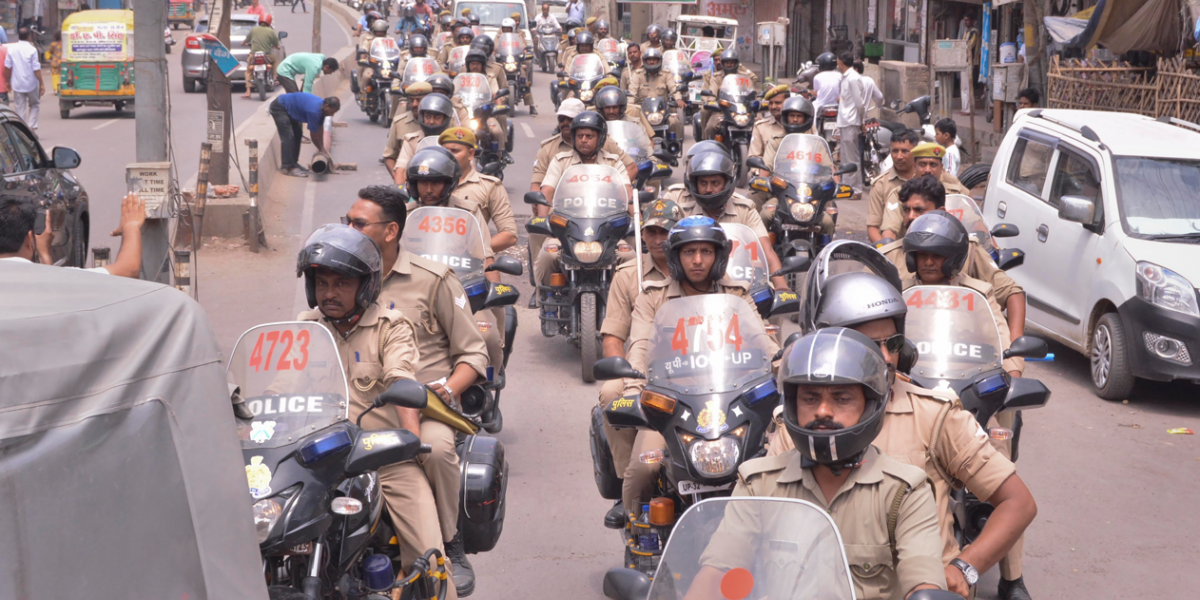 Kanpur: Police personnel patrol in a locality, a day after clashes broke out between two groups over market shutdown, in Kanpur, Saturday, June 4, 2022. Photo: PTI

Lucknow: The police on Saturday, June 4 registered three first information reports (FIRs) against more than 1,000 unknown persons, out of which 55 people have been named as accused, all of whom are Muslims. The FIRs were filed against them in connection with the Kanpur violence that broke out on Friday, June 3.

The police have so far arrested 36 people in connection with the incident.

Clashes broke out in Uttar Pradesh’s Kanpur on Friday during a protest against Bharatiya Janta Party (BJP) spokesperson Nupur Sharma for her allegedly offensive statements against Prophet Muhammad during a debate show on Times Now. The discussion was on the ongoing Gyanvapi mosque row.

During the clashes, mobs hurled bombs and pelted stones at each other.

The violence erupted at Kanpur’s Nai Sadak, Yateemkana and Parade after Friday prayers.

Police are identifying more accused with the help of video footage. They have warned that action will be taken against them under the Gangster Act. The senior police officials have also allegedly planned to seize and demolish the properties of the accused.

Additional director general (law and order) Prashant Kumar told The Wire: “Those involved in the violence are being identified with the help of video footage of the incident.” He added, “The accused and the conspirators of the violence will be booked under the Gangster Act and their properties will be seized or demolished.”

At the time of the clashes, President Ram Nath Kovind, Prime Minister Narendra Modi and chief minister Yogi Adityanath were also in Kanpur (Rural), which is less than 100 kilometres away from the violence spot.

The violence erupted after a group of protesters forced the closure of shops in the Beconganj area after the Friday prayers. However, the shopkeepers refused to close their business for the day. This led to a scuffle between the protesters and the business community. According to sources and videos of the incident, members of the Hindutva groups also participated in the clashes.

Initially, the local police had controlled the situation by baton-charging the protesters. Later, the situation escalated when some unknown persons fired two shots in the air, and soon, people started pelting bricks and stones at each other.

In the stone-pelting incident, at least six people were injured. Some vehicles were also damaged during the clashes. Sources said the mobs used country-made petrol bombs.

According to the sources, some local leaders had given a call for a bandh. Maulana Mohammed Ali (MMA) Jauhar Fans Association chief, Hayat Zafar Hashmi, supported the bandh.

Sources revealed that the MMA is a Kanpur-based NGO, and is nearly a decade old but has a very limited influence in the community. The NGO works on various humanities programmes such as health and education, and is involved in various social movements such as atrocities against women, etc.

The Wire tried to contact Hashmi, but his mobile was switched off.

Separately, the Samajwadi Party took a dig at the state government, saying that the Kanpur violence is a “failure of intelligence”. Former chief minister and party president Akhilesh Yadav also called for an arrest of Sharma and appealed to the people to “maintain the peace.”

While talking to The Wire, Congress MLC Deepak Singh said that “the violence in Kanpur occurred at a time when the president, prime minister and the chief minister were present there, which showed the failure of the law and order situation in the state.”

“The ruling BJP planned such incidents to divert the minds of the public from the real issues of unemployment, agrarian distress, inflation, etc.,” the Congress MLC said.

Kanpur’s district magistrate, Neha Sharma, told the media that the situation is under control.

Meanwhile, Vishwa Hindu Parishad leader, Sharad Sharma, said, “Today’s incident is unfortunate and an attempt to breach the peace.” He also said that from Kashmir to Kanpur, all stone pelters are “anti-national”.

The All India Mohammadi Mission condemned the violence and appealed for peace. Syed Mohammad Ahmad Mia, president of the youth wing of the mission, asked, “Why has the government not yet arrested BJP leader Nupur Sharma, despite evidence against her blasphemous comments about the prophet?”

Meanwhile, Samajwadi Party national spokesperson, Sumaiya Rana, said in Lucknow on June 4 that the UP Police have put her under house arrest. Heavy police have been deployed outside her residence in the Qaiserbagh locality. Rana had announced to protest against Sharma on Saturday at the 1090 crossing of Kanpur’s Gomtinagar locality.

Subhashni Ali, a former member of parliament from Kanpur and politburo member of the Communist Party of India (Marxist), demanded legal action against Sharma as well as the TV channel and its news anchor, who allowed them to broadcast “blasphemous comments” about the revered Islamic figure.