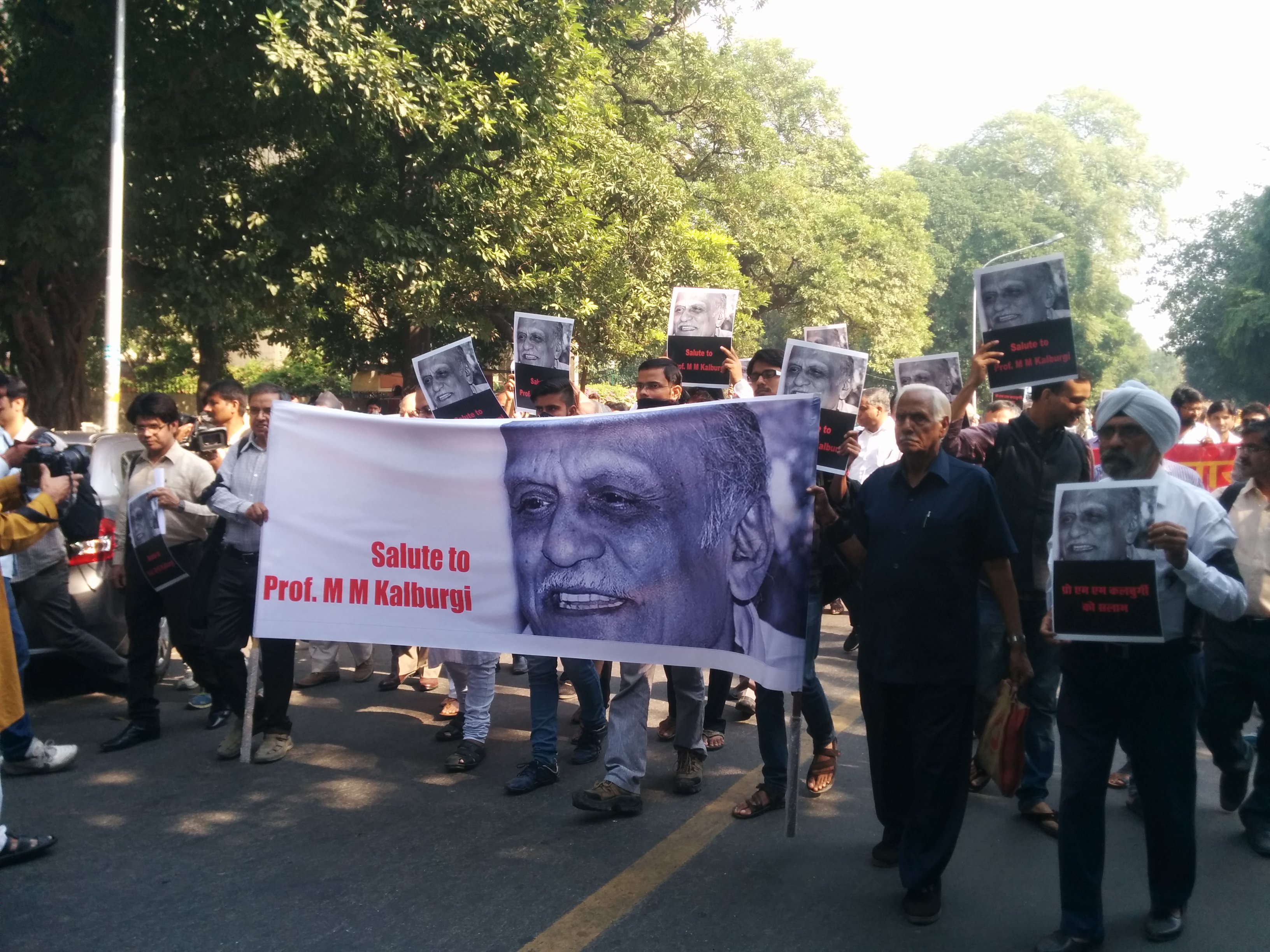 Artists protest outside the Sahitya Akademi in New Delhi at the murder of the writer MM Kalburgi. Credit: Kedar Nagarajan

New Delhi: The wife of Kannada scholar M.M. Kalburgi, who was murdered at his home in Dharwad district in Karnataka on August 30, 2015, has identified on Wednesday one of the accused involved in his murder in a test identification parade.

According to an Indian Express report, the man identified by Umadevi Kalburgi is 27-year-old Ganesh Miskin, who has been linked to Hindutva extremist group Sanatan Sanstha. Miskin has previously been identified as a suspect in the murder of journalist Gauri Lankesh in Bengaluru in September 2017.

Kalburgi’s son Shreevijay Kalburg told the Indian Express that his mother had identified the culprit. However, “the name of the person who was identified was not disclosed to us,” he added.

Earlier, a preliminary forensic analysis of bullets and empty cartridges found at the scene of Lankesh’s murder had revealed that the same countrymade pistol was used to kill Kalburgi two years prior as well, suggesting that one outfit or group was responsible for both the killings.

In January 2018, Umadevi told the Supreme Court that the organisations responsible for her husband’s death were also behind the murders of rationalist thinkers Narendra Dabholkar in August 2013 and Govind Pansare in February 2015. “All three were abused, threatened by certain sections of the society,” she said.

Members of the Sanatan Sanstha or its offshoot, Hindu Janajagruti Samiti, have been arrested in the murder cases of Kalburgi, Dabholkar, Pansare and Lankesh. The outfits aim to establish India as a ‘Hindu nation’ and its members have also been arrested in connection with bomb blasts in Thane and Vashi.

In February 2019, the SIT, which was set up to investigate the Gauri murder case, was directed to probe the Kalburgi assassination case also by the Supreme Court.

An unidentified source told the New Indian Express that “the SIT will soon submit the chargesheet in the Kalburgi case”.

Miskin is suspected to be the motorcycle rider who had ferried Lankesh’s shooter Parshuram Waghmare.

Miskin, who was arrested in July 2018, had reportedly told the SIT that the motorcycle in question was allegedly stolen by a mechanic by the name of Suryavanshi to execute the Kalburgi murder.

Kalburgi, a Sahitya Akademi Award winner, was shot dead by two assailants right outside his home, when he went to open the door, on August 30, 2015. The year before he died, Kalburgi had become the target of a campaign by the Vishwa Hindu Parishad and other right-wing forces, which had burnt his effigy and demanded his arrest for remarks he made against idol worship.