The order confirms that the NC patriarch has been under house arrest, contrary to Amit Shah's claim on August 6.

A file image of Omar and Farooq Abdullah, both of whom are detained. Photo: PTI

New Delhi: The Jammu and Kashmir high court has issued orders allowing two MPs of the National Conference (NC) party to meet their leaders Farooq and Omar Abdullah, but on certain conditions, including that they would not speak to the press about the “details and deliberations with the detained leaders”.

This is a significant development because home minister Amit Shah, during the debate in the Lok Sabha on August 6 about the dilution of Article 370 and bifurcating J&K, had claimed that Farooq Abdullah was not detained and had not come to parliament by his own will. The NC patriarch, who is the Srinagar MP, met the press later that day and accused Shah of lying, saying he was not allowed to leave his house, nor was anyone allowed to enter. “I feel sad that the home minister of India can lie like this,” he had said.

Also Read: ‘Feel Sad That Home Minister Can Lie Like This’: Farooq Abdullah Says He Was Detained

The high court’s order confirms that the NC president has been under house arrest. His son and party vice president Omar Abdullah and another former chief minister, Mehbooba Mufti, are among several politicians from the Valley who have been in detention since August 5. Kashmir continues to be under a communication blockade. The Centre has claimed that the detentions and the clampdown are to prevent protests.

On Thursday, the J&K high court directed authorities to allow two National Conference parliament members to meet Farooq and Omar Abdullah in Srinagar at the earliest. Justice Sanjeev Kumar asked the deputy commissioner of Srinagar to inform Hasnain Masoodi and Akbar Lone about the dates of the meeting. However, he barred the two MPs from discussing details of the meeting with the press.

“The meeting shall be related to a courtesy call and to know about the well being of the persons under detention. After the meeting, the petitioners shall not go the press to share details and deliberations with the detained leaders,” the court said. Justice Kumar asked the deputy commissioner to ensure that the meeting happens “during the course of this week”.

“It would be appropriate if the petitioners are permitted to meet the aforesaid persons separately on different occasions, either on the same day or on different days,” Justice Kumar said.

On September 6, the court had allowed Masoodi and Lone’s petition seeking directions to facilitate a meeting with the Abdullahs. The petition said that the two leaders were not allowed to meet other members of the party or even their relatives. Masoodi, a former J&K high court judge, said he could also provide legal advice to the two former chief ministers.

Without issuing a formal notice, the court called senior additional advocate general Javed Iqbal to ascertain whether the petitioners had “actually been prevented”  from meeting their party president and vice president, and if so, for what reasons.

Also Read: ‘Kashmiris Should Be Given Freedom to Take Their Own Decisions’: Punjab Farmers

In response, advocate general D.C. Raina and Iqbal appeared before the court to say “there is no formal restriction” barring the petitioners from meeting the detained leaders. “In short it was [the] submission of learned Advocate General that the State may not be averse to the meeting of petitioners with their President and Vice President, provided petitioners ensure that they would not do anything aimed at vitiating the peaceful atmosphere,” the court order says.

Previously, MDMK chief and Rajya Sabha MP Vaiko had filed a habeas corpus petition for Farooq Abdullah in the Supreme Court on Wednesday. Vaiko, who was one of the few MPs who strongly opposed the Centre’s decision to revoke J&K’s special status, said Abdullah was invited to an event in Tamil Nadu but has been “incommunicado for a long time”. 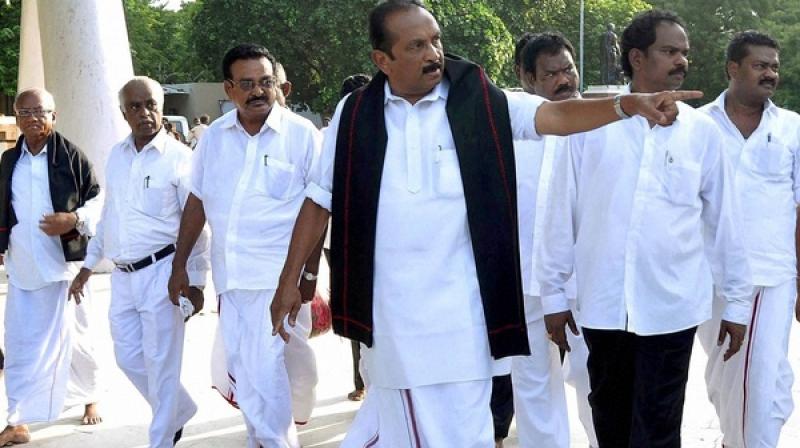 A habeas corpus seeks that a person under arrest be produced before a judge to secure their release unless lawful grounds are provided for their detention.

Vaiko’s petition said he had requested the authorities on August 29 to allow Abdullah to travel to Chennai “in the interest of freedom of speech and in the spirit of encouraging democratic participation”. He did not receive any response, the MDMK chief said. The Rajya Sabha MP said the refusal to allow Abdullah attend the conference is “illegal and arbitrary and violative of Articles 21, 22 and 19(1)(a) of the Constitution of India”.

Over the past few weeks, the Supreme Court has granted permission for relatives and party members to meet other detained politicians. On August 29, CPI(M) general secretary Sitaram Yechury met ailing colleague Mohammed Yousuf Tarigami, who was under house arrest since August 5, after the apex court granted permission. The top court also placed restrictions on the visit.

Iltija Javed was allowed by the Supreme Court to meet her mother Mehbooba Mufti. The Centre objected to Javed’s plea, saying she could approach the district magistrate instead. Chief Justice Ranjan Gogoi said, “It is her privilege to move this forum. What is the objection in her going to meet her mother?”