Ansari was thrashed by a mob on June 17 at Jharkhand's Dhatkidih village in Seraikela-Kharsawan district. 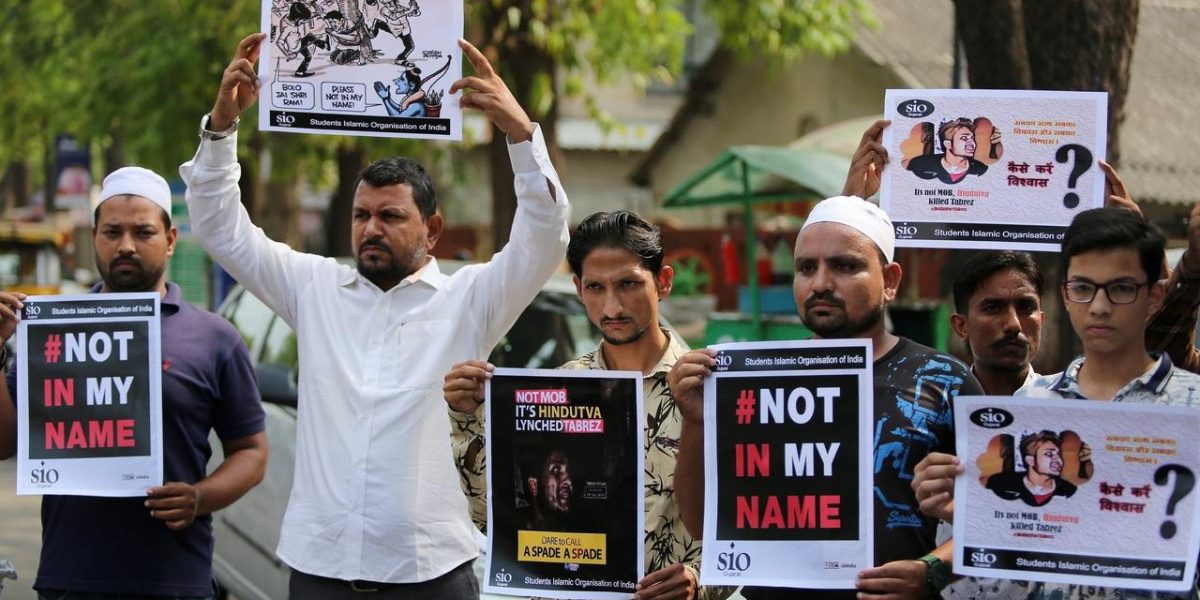 People hold placards during a protest against the lynching of Tabrez Ansari by a mob, in Ahmedabad, India, June 26, 2019. Photo: Reuters/Amit Dave/Files

Ranchi: The Jharkhand high court on Tuesday granted bail to six people arrested in connection with the lynching of Tabrez Ansari in June.

Justice R. Mukhopadhyay granted bail to the six after their advocate A.K. Sahani informed the court that their names were not mentioned in the FIR registered in connection with Ansari’s death. Main accused Papu Mandal had also not implicated them during his interrogation by the police.

The advocate told the court that the six – Bhimsen Mandal, Chamu Nayak, Mahesh Mahali, Satyanarayan Nayak, Madan Nayak, and Vikram Mandal – had been in jail since June 25.

Ansari was thrashed by a mob on June 17 at Dhatkidih village in Seraikela-Kharsawan district when he and two of his associates allegedly tried to enter a house with an intention to commit theft, a senior police officer had said then.

The police reached the spot the next morning and took Ansari to jail on the basis of a complaint lodged by the villagers, the police officer said.

When Ansari’s condition deteriorated in jail, he was taken to the Sadar hospital in Seraikela-Kharsawan where he was diagnosed with multiple injuries, he said.

Later, he was referred to the Tata Main Hospital in Jamshedpur where he died on June 22, the police officer said.

As The Wire has reported before, the police’s role in the case has come under question from the very beginning. When Ansari was taken into custody, the police did not file a case against the people who had attacked him. That case was filed only after his death, based on a complaint from his wife. A fact-finding team from the Jharkhand Janadhikar Mahasabha had also found that the police had denied Ansari proper medical treatment and also threatened his family.

Ansari’s death became a matter of concern for the police only after a video of the mob attacking him went viral on social media. A probe panel appointed by the district administration also found lapses on the police’s part, and said that doctors at the first hospital Ansari was taken to were also responsible as they cleared him for custody despite severe head injuries.

The police had also removed the murder charge against 11 accused in the case. The charge was brought back after widespread condemnation.