Student leader Nasir Kheuhami approached the court in connection with the case after police stations refused to register an FIR against two politicians and a journalist for creating ‘communal disharmony’.

Jalandhar/Kupwara: A week after Nasir Kheuhami, national spokesperson of the Jammu and Kashmir Students’ Association, tried to file an FIR against two politicians and a journalist for creating ‘communal disharmony’ in the alleged forced conversion row of a Kashmiri Sikh woman in the Valley, a Srinagar court on Monday directed the Station House Officer (SHO) of Sadder to file a status report in connection with the case on July 12, failing which action would be taken against him.

Khuehami followed the legal route after the Bandipora and Kothi Baag police stations refused to register an FIR against Sirsa, Raina and Bali. The case in question pertains to Manmeet Kaur, a Kashmiri Sikh woman, whose family had alleged that their daughter was forcibly converted and married to a Muslim man, leading to widespread protests by Sikhs in the Valley. The woman was later married off to a Sikh man.

Initially, Khuehami filed an application with the police against Sirsa under Sections 153 A, 153 B and 505 of the IPC for inciting violence and creating communal disharmony. Later when he approached the court, he added Amaan Bali and Ravinder Raina’s names to the complaint. A copy of the Chief Judicial Magistrate’s order and the complaint is with The Wire.

Talking to The Wire, Kheuhami said that though the police did not register the FIR, the court’s order has reposed his faith in the judiciary. “The CJM has directed the SHO Sadder to file a status report by June 12, failing which action would be initiated against him,” he said.

“We demand a public apology from Manjinder Sirsa, Amaan Bali and Ravinder Raina for creating communal disharmony in J&K. I would also meet the family of Shahid Nazir Bhat, who was lodged in the jail after the alleged forced conversion row of Manmeet Kaur erupted and follow her case legally,” he said.

Further expressing concern, Nasir said that their community was maligned by people with vested interests. “Quran does not teach us to forcefully convert women from other faith but Sirsa, Bali and Raina kept giving misleading and factually incorrect statements, hence creating a wedge between the Sikhs and Muslims in the Valley. They issued these statements without realising the fact that Kashmiri students and working class across the country might come under attack. We know how Kashmiri students were targeted in the country when Pulwama terror attack took place in 2019. A large number of Kashmiri students’ study in Punjab and Chandigarh alone and they might face problems now,” he said.

However, when Senior Superintendent of Police (SSP) Bandipora Mohammad Zaid was asked about the reason behind not registering the FIR, he said, “One protest took place in Delhi, the other in Srinagar, why should we have registered the FIR here.” On the other hand, Sub Divisional Police Officer (SDPO) Kothi Baag, Srinagar simply dodged the query and refused to comment. 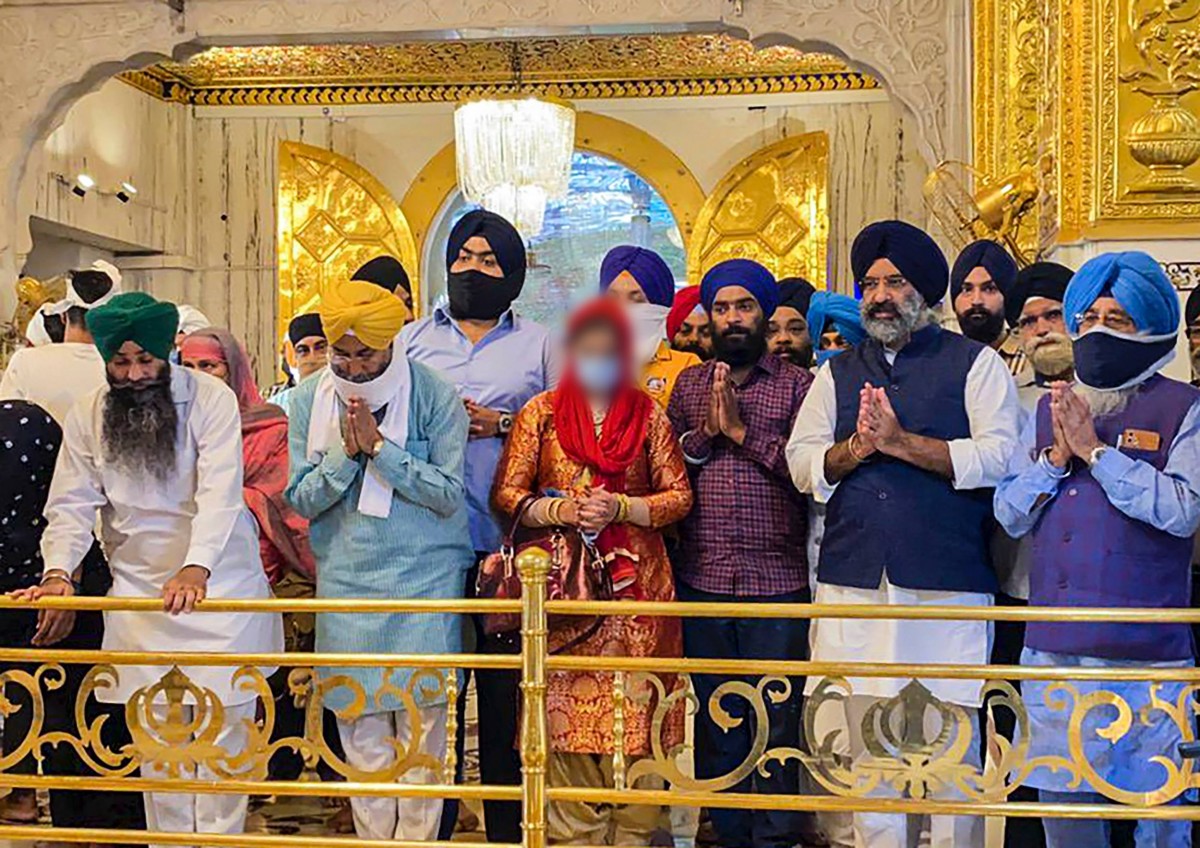 The 18-year-old Sikh woman from Kashmir who was brought to Delhi by ‘community leaders’. Photo: PTI

Notably, in his complaint to the court, Nasir had mentioned that on June 26, Sirsa organised a protest and a press conference against the Muslim community alleging that its members were kidnapping, converting young Sikh girls into Muslims and forcing them to marry older Muslim men. “Sirsa had stated that at least four Muslim men kidnapped young Sikh girls at gunpoint and forced them to marry these men in J&K UT. Even Amaan Bali, who is an active Twitter user having around 35.5k followers, tweeted about this incident and alleged that Sikh girls have been lured and married as third or second wives and maids,” he said.

“Amaan Bali kept tweeting without verifying the facts and spread venom against the Muslim community, stating that they are ready to fight and get back the women. Bali also said that no woman in the Sikh community will be allowed to marry outside of the community, thereby showing no respect to the freedom of choice guaranteed to every citizen by the constitution of the country,” Nasir added.

Similarly, Nasir said that BJP’s Jammu and Kashmir President Ravinder Raina also addressed a press conference and alleged that the members of the Muslim community had hatched a conspiracy of forcibly converting Sikh women at gunpoint and marrying them to elderly Muslim men. “Raina further stated that he was ready along with other supporters to attack the community at Lal Chowk, Srinagar and tried to instigate a gathering of Sikh protestors. Raina also shared that in the last three months, 11 girls were converted on gunpoint, which is far from the truth,” he shared.

While Sirsa was not available for comments despite repeated attempts, Bali said, “This is clearly an intimidation tactic by Nasir Kheuhami. If he represents the students’ body, did he consult the Sikh students? Secondly, all the reporters who covered this story are Muslims from the Valley, so one cannot expect the Sikh side of the story from them. I was the only reporter, who presented the facts and the Sikh side of the story from day one. But, if Sikhs will raise the issue of ‘conversion by force’, we will always stand with the family concerned (sic).”

Commenting on this incident, J&K’s grand mufti Nasir-ul-Islam, without naming anybody, said that those who were trying to disrupt the peace and harmony in the Valley should be booked under the Public Safety Act (PSA). “Islam does not allow forcible conversion, but I have said it earlier and I am saying it again that if there is any forceful conversion, we condemn it. At the same time, any adult, whether Muslim or non-Muslim has every right to choose their partner and live life. Sikhs and Muslims have always stayed together in the Valley. We support them and they support us,” he said.

On DGSMC president Manjinder Singh Sirsa’s demand for an anti-conversion law on the lines of Uttar Pradesh (UP) in J&K, Mufti said, “Such a law would not solve any matter. It would be better, if we sit together and find an amicable solution to this issue.”

Even Jagmohan Singh Raina, the president of All Party Sikh Coordination Committee, echoed Mufti’s sentiments and said that no forceful conversion of women took place. “The women have already come out and issued statements that they wilfully converted their religion. The fact is that it is the ‘outsiders’, who did all this to damage the social fabric of the Valley and gain political mileage. BJP was trying to create a rift between Sikhs and Muslims in the Valley for political goals. Later, even ex-DSGMC president Paramjit Singh Sarna spoke to me and apologised, stating that nothing happened on gunpoint,” he said.

Raina also added that this is not the first time that Kashmiris were defamed, as earlier also such attempts were made. “But one should bear it in mind that Kashmir is a sensitive place. Whenever a statement has to be made, it should be stated considering its importance and consequences,” he added.

When asked if he too supported the call for anti-conversion law, Raina said that his concern was not only for the minority but also for the majority community.  “I am not making a political statement,” he said.

Earlier, Amritsar based Sikh hardliner group Dal Khalsa spokesperson Kanwar Pal Singh had issued a joint statement by its leaders Harpal Singh Cheema and H.S. Dhami stating that they consider the Sikh women’s marriages outside of their faith, to be a personal and societal issue and that they strongly oppose Manjinder Singh Sirsa’s attempts to divide the two communities in J&K.

“We firmly believe that in order to force a new narrative of ‘trouble in Kashmir’ to perpetuate its agenda of delimitation and elections, this entire drama was being played in public by the BJP-led Centre government through the likes of Sirsa and many others,” they said.

Meanwhile, Shiromani Gurdwara Parbhandak Committee (SGPC) president Bibi Jagir Kaur had also sent a team from its Jammu and Kashmir Wing to track the developments in this case. Even Akal Takth Jathedar Giani Harpreet Singh had written a letter to J&K Lt Governor Manoj Sinha on June 26 regarding the alleged ‘forceful conversion’ and marriage of Sikh girls and sought an anti-conversion law along the lines of the one enacted in Uttar Pradesh.