In Relief for Doctors, Supreme Court Allows Counselling for NEET-PG to Resume

The bench said that validity of criteria of Rs 8 lakh for determination of EWS for future years will be subject to final adjudication of the batch of petitions. 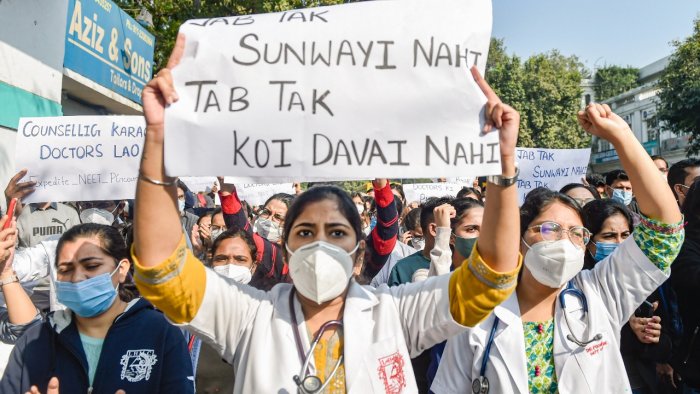 New Delhi: The Supreme Court on Friday, in an interim order, allowed the resumption of medical counselling for NEET-PG admissions for the year 2021-22, and upheld the validity of 27% OBC and 10% economically weaker sections quotas.

A bench of Justices D.Y. Chandrachud and A.S. Bopanna said that detailed reasons for the interim order will follow and the counselling for the NEET-PG for the academic year 2021-22 will proceed as per the criteria already notified.

The bench said that validity of criteria of Rs 8 lakh for determination of EWS for future years will be subject to final adjudication of the batch of petitions and listed the pleas for final hearing on March 5.

The NEET-PG is conducted by the National Board of Examinations that comes under the Union health ministry.

Over the last several weeks, doctors have been protesting that they are overworked and overburdened due to counselling not taking place on time. The counselling is the last step before these students are admitted in medical colleges for further study and care work.

On October 25, the Union government had told the Supreme Court that NEET counselling would be on hold while the court adjudicated the matter. Last week, the Union government said after constituting a panel to look into the Rs 8 lakh cut-off, it has decided to stick by this number for this year. The Committee had said that while the criterion may be changed in the future, this year’s counselling should be allowed to proceed as planned.