Was it a judicial response to the officer’s failure to make a resounding success of the NRC exercise? Will we ever know? 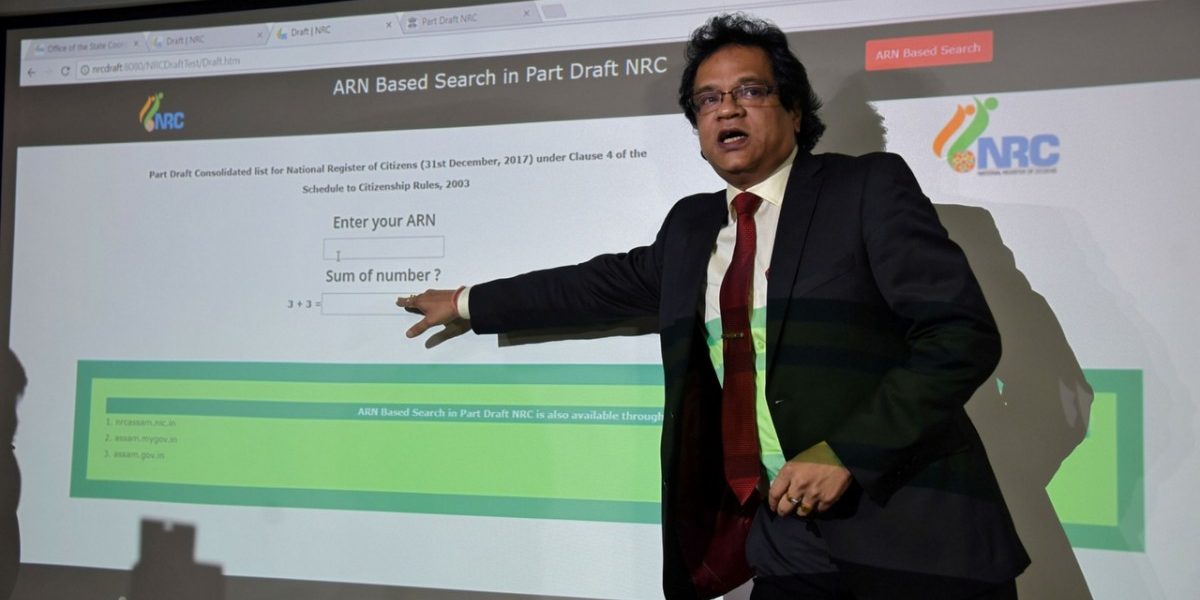 On October 18, 2019, the ‘NRC Bench’ of the Supreme Court presided over by Chief Justice of India Ranjan Gogoi passed an extremely interesting order.

This is the bench that is hearing and monitoring the enforcement of the Assam Accord, which had mandated an updated National Register of Citizens (NRC) for the state.

In fact, it was the active monitoring by the court that led to the completion of an exercise which many a political party had promised but few were serious in actual implementation.

Since partition, rarely has India seen a man-made calamity as disastrous as this exercise, which resulted in the “othering” of over 1.9 million people. The story is still unfolding and best left for another day.

Suffice it for our purpose to know that at the heart of this counting was one man – Prateek Hajela, the state co-ordinator.

The court’s order, which creates history of sorts in administrative law, is just two paragraphs long – a fitting riposte to scholars who say Indian judgments are not as pithy as those of the House of Lords. It says, having heard the parties, on the “totality of facts”,

“we order for the inter-cadre transfer of Mr. Hajela to the State of Madhya Pradesh on deputation for the maximum period permissible under the relevant rules/regulations. The notification consequent to the above direction will be issued by the competent authority of the Union of India/State Government forthwith and in any case within seven days from today.”

This order gained considerable traction by Friday evening and press reports the next day only compounded the intrigue. It transpires that attorney general K.K. Venugopal inquired from the bench if there was any reason for the transfer. The terse reply from the bench was “Is there any order without a reason?”

As I have said, since the order is two paras in length, searching for the stated reason may not be a difficult task. It is the “totality of facts”.

By now, the legal and the extra-legal worlds have grown used to reading the curious collegium minutes that the top court has been religiously uploading onto its official website.

This was an ingenuous compromise to get on board Justice Chelameswar (a dissenting voice in the National Judicial Appointments Commission case) who had been publicly abstaining from then Chief Justice of India Dipak Misra’s collegium meetings.

It was felt the recording of reasons would inject a measure of accountability and probity in the opacity that characterised the court’s version of the Sistine Chapel process wherein cardinals select the pope in secrecy.

These hopes were soon dashed. While the minutes publicly named, and sadly perhaps even shamed, many candidates for elevation as high court judges, Supreme Court judges or as high court chief justices, the “reasons” recorded rather that bringing in the disinfectant effect of sunlight, served as steroid for conspiracy theories and reckless speculation.

Most of the time the “reason” was, as in our subject order, – “totality of facts”.

Rejecting aspirants for judicial office with minutes saying “we have considered the totality of facts” is one thing as they can retreat into the shell of their private lives, but recording such unfathomable “reasons” for serving judges and chief justices is another thing altogether.

In many cases, the subjects of these minutes have to hold court the next day in the public glare fully aware of the loss of face such a public document brings for them.  In the case of the aborted Madras-Meghalaya inter-change, the communique from the Supreme Court administration intimating to the general public that the collegium had “reasons” and that it could be made public if so warranted, was again unprecedented.

Even if the “totality” doctrine can be applied to administrative orders, is it kosher for judicial orders?

The top court, being a final arbiter, is technically not bound to record reasons. On Mondays-Fridays, the court tosses out hundreds of special leave petitions with one word – “dismissed”. However, the judicial convention has been that in writ petitions invoking Article 32 of the Constitution of India or in case leave to appeal is granted and a case is heard, some sort of reasoned order, if not a full-fledged judgement is passed.

The absence of reasons in our subject order only promotes intrigue and gossip. The court sadly lives in the age of social media and by and large has been large hearted in taking the relentless criticism that it faces daily in the cyberspace.

As an administrative lawyer, the first principle we learn is that courts do not intervene in matters of transfer, even when the employee comes knocking.

Secondly, not only is a transfer the sole prerogative of the employer, even the court cannot act at its whim. The transfer must always be in accordance with the rules.

Also, it cannot be used punitively.

Let us examine the curious case of Hajela, a 1995-batch IAS Assam-Meghalaya cadre officer who was appointed the NRC coordinator on September 5, 2013 by the Supreme Court.

Rule 7 of the 1954 Rules mandates that appointment to cadre posts of state cadre shall be done by the state. The Central government decides on the tenure subject to consultation with the state government. An officer may be transferred before the minimum prescribed tenure only on the recommendation of a ‘committee on minimum tenure’.

The schedule to the 1954 Rules stipulates a detailed procedure for the transfer. The factors the committee considers are:

(i) report of the administrative department along with any other inputs it may have from other reliable sources.

(ii) comments or views of the officer affected.

On November 8, 2004, the Department of Personnel and Training formulated the ‘Change of Cadre of All India Service Officers” as well as the inter-cadre deputation policy.

The Central government can have these “reasons” independently assessed and can agree to an initial three-year deputation before revisiting a more permanent arrangement.

All such applications have to be normally routed through the concerned state government and the state’s consent obtained.

As this is perhaps the first instance of a court directed cadre transfer, there are no established judicial parameters to test the same. In cases where employees have challenged their transfer, the top court has said many a time that “non-interference” is the rule unless the order is malafide or in violation of a statutory rule. An example is Mrs. Shilpi Bose and Others v. State of Bihar and Others, 1991 Supp. (2) SCC 659.

“The courts or tribunals are not appellate forums to decide on transfer of officers on administrative grounds. The wheels of administration should be allowed to run smoothly and the Courts or Tribunals are not expected to interdict the working of the administrative system by transferring the officers to proper places. It is for the administration to take appropriate decision and such decisions shall stand unless they are vitiated either by mala fides or by extraneous consideration without any factual background foundation.”

There may be a defence of the use of the “inherent powers” by the court falling upon Article 142 of the constitution.  However, now we have a plethora of judicial precedents which have held that this magic wand cannot be waived in the teeth of rules and regulations.

The court’s “totality of facts”, leaves the reasons in the “sealed cover” of second guessing. Was it a judicial response to the officer’s failure to make a resounding success of the NRC exercise?

Was it to protect the officer from any backlash in the state? Was it to remove the face of NRC and allow social tensions to subside?

I assume the motives may have been noble. Sadly, we shall never know.

Sanjoy Ghose is an advocate. Research inputs for this article were provided by Vishu Surana, a third year student of NLSIU.