On Tuesday evening, 79-year-old academic Roop Rekha Verma and another person who prefers not to be identified submitted papers to stand surety for the Malayalam journalist. 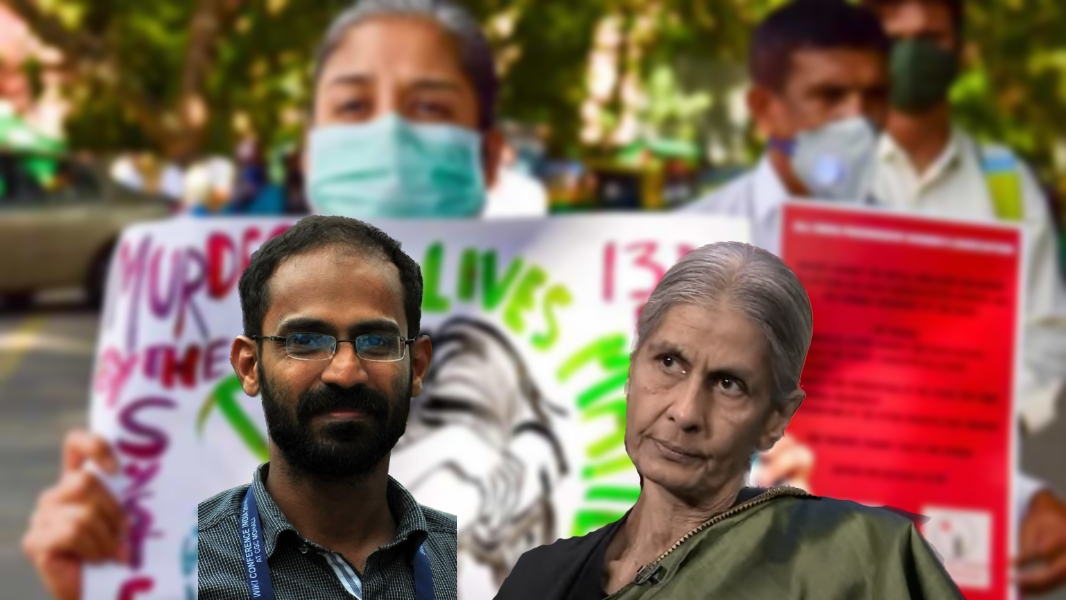 Siddique Kappan and Roop Rekha Verma. In the background are protesters demanding justice for the Hathras rape and murder case. Illustration: The Wire

While the top court granted him bail on September 9, it said Kappan should be produced in the trial court within three days of its order to be released on bail, subject to conditions that the trial court may deem appropriate.

On September 12, Kappan was produced before a Lucknow trial court and additional sessions judge Anurodh Mishra said his release would be conditional on furnishing two individual sureties – from people who are residents of Uttar Prades – of Rs 1 lakh each and a personal bond of the same amount.

“The bail conditions said that we need to produce two people who should have 1 lakh rupees worth of value either in their account or by way of assets—to stand as surety,” the journalist’s lawyer Mohamed Dhanish told The Quint. He added that due to the “sensitive nature” of the case, the lawyers were finding it hard to find people who are willing to stand as surety.

That search finally came to an end on Tuesday evening, when Roop Rekha Verma, the former vice chancellor of Lucknow University, and another person who prefers not to be identified submitted papers to stand as surety for Kappan.

However, Kappan will not be released from jail until he secures bail in the separate Prevention of Money Laundering Act (PMLA) case registered against him. The PMLA case is being heard by a Lucknow court and the date of the next hearing is September 23.

Kappan was arrested in October 2020, when he was on the way to Hathras in Uttar Pradesh to report on the rape and murder of a woman from a Dalit community by men from a dominant caste. In the chargesheet against Kappan, the UP special task force said that the journalist “only reported about Muslims” and that “reporting on riots is also communal” and charged under the draconian Unlawful Activities (Prevention) Act (UAPA).

The Supreme Court, granting bail to him, orally observed, “Every person has the right to free expression. He is trying to show that victim needs justice and raise a common voice. Is that a crime in [the] eyes of [the] law?”

Verma was a professor of philosophy from 1964 to 2003. Also a social activist, she has intervened in the past on behalf of women who were victims of domestic and communal violence, according to The News Minute.

“I never knew that they were looking for sureties in the case,” Verma told TNM. She was informed by a friend from Kerala about the troubles Kappan’s lawyers were facing and “readily agreed” to stand surety.

“This is the minimum any citizen can do in dark times when so many good people are targeted. The best people of India – like Sudha Baradwaj, Fr Stan Swamy, Varavara Rao, Anand Teltumbde – have been in jail for the last many years,” she told TNM.

After she submitted papers to stand surety, several people called Verma and described her decision as “courageous”. She told TNM, “…if standing as surety for one person’s bail is seen as an act of courage, aren’t we living in such horrible times?”