Hathras: In Affidavit to SC, UP Govt Peddles Half Truths, Says Conspiracy Afoot to Malign It

Contrary to ground reports, it said "extraordinary circumstances and a sequence of unlawful events" had made it necessary for UP Police to cremate the Hathras victim in the dead of the night in the "presence of the victim's family." 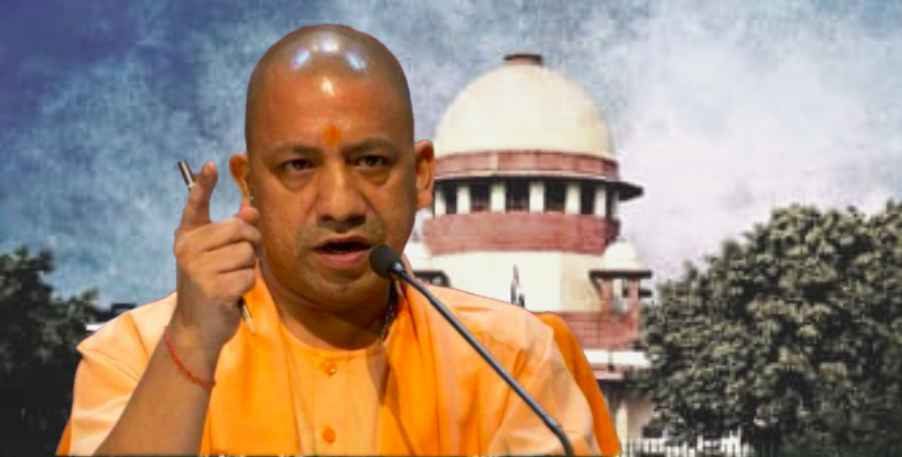 Uttar Pradesh CM Yogi Adityanath. In the background is the Supreme Court.

New Delhi: The Uttar Pradesh government has told the Supreme Court that its police had “immediately registered the crime”, acted in accordance with necessity and that “extraordinary circumstances and a sequence of unlawful events” had made it necessary for them to cremate the Hathras victim in the dead of the night in the presence of the victim’s family.

In addition to the fact that the police did not file a rape FIR in the immediate aftermath of the crime, and that the victim’s family has clearly claimed not to have been able to see her body, let alone attend her cremation, several lines in the affidavit run counter to ground reports by news outlets, including The Wire’s, the victim’s own video statements and her family’s claims.

The Adityanath government has claimed that the issue of the 19-year-old Dalit woman dying of grievous injuries in a Delhi hospital on September 29, a fortnight after she was allegedly raped at her village by four upper caste Thakur men, has been used by “some sections” as a planned and deliberate attempt to foment caste and communal riots.

The UP government said this in an affidavit filed in response to a PIL filed by activist Satyama Dubey, which is being heard before a bench headed by Chief Justice S.A. Bobde.

The government said CBI probe is necessary in the case to ensure that “no vested interest is able to create a fake and false narrative with oblique motives.”

Also read: UP Govt’s ‘Conspiracy’ FIR an Example of Adityanath’s Favourite Defence – Going on the Offence

The Uttar Pradesh government has also asked for the CBI to investigate one of the 19 FIRs UP Police has filed, in which the government claims a purported “criminal conspiracy to spread caste conflict, instigating violence, incidents of vicious propaganda by sections of media and political interests.”

The government also asked the Supreme Court to keep the current PIL pending until the CBI’s investigation is completed.

It said there have been “orchestrated efforts to malign the image of government on social media by attributing baseless comments and building up a distorted narrative on the Hathras case.” The government has been keen to claim that an “international conspiracy” is afoot regarding the crime on the teenager.

“The diverse examples from all across the country from fake and verified handles from people of different political spectrums clearly points towards a conspiracy fomented by rival political parties to defame and discredit the government of UP through its members,” it said.

The Wire reported on Monday that UP has filed FIRs under stringent laws, including sedition, attempts to incite violence and disturb peace, and for violating COVID-19 protocols.

“The proxy war of political parties fought by their members directly and through several fake handles by propagating fake news through sheer copy paste of content is an obvious attempt to tarnish the image of dignitaries of the UP government through sheer propaganda,” it added.

Pages of the affidavit have been devoted to noting opposition parties’ response to the death of the victim and the situation at Delhi’s Safdarjung Hospital in the aftermath.

The UP government makes several mentions of Bhim Army chief Chandra Shekhar Aazad in an attempt to justify the hurried cremation of the victim, but is unclear as to how he could have influenced the process. On Monday, the government booked Aazad and 400 others over purported violation Section 144 and sections of the Epidemic Diseases Act

More importantly, the state government stuck to its claim that “no prima facie findings of rape” were found.

It said that as per the provisional medical report of sexual assault forensic examination submitted by JN Medical Hospital, Aligarh on September 22, no abrasions, contusions, lacerations or swelling were found; there were no prima facie findings of rape.

It said that the samples were then sent to the forensic science laboratory Agra for further examination and the hospital “has also given its final opinion on the issue and specifically stated in its report that there is no sign suggestive of rape.”

The Wire has published not just transcripts of the victim’s video recordings in which she says that she has been raped, but also analyses of rape laws which dictate what legally constitutes rape and how far off the mark the government is in its claims.