Harvey Weinstein Convicted of Sexual Assault, Acquitted of Being a Serial Predator

Weinstein has been convicted of sexually assaulting former production assistant Mimi Haleyi in 2006 and raping Jessica Mann, a onetime aspiring actress, in 2013. 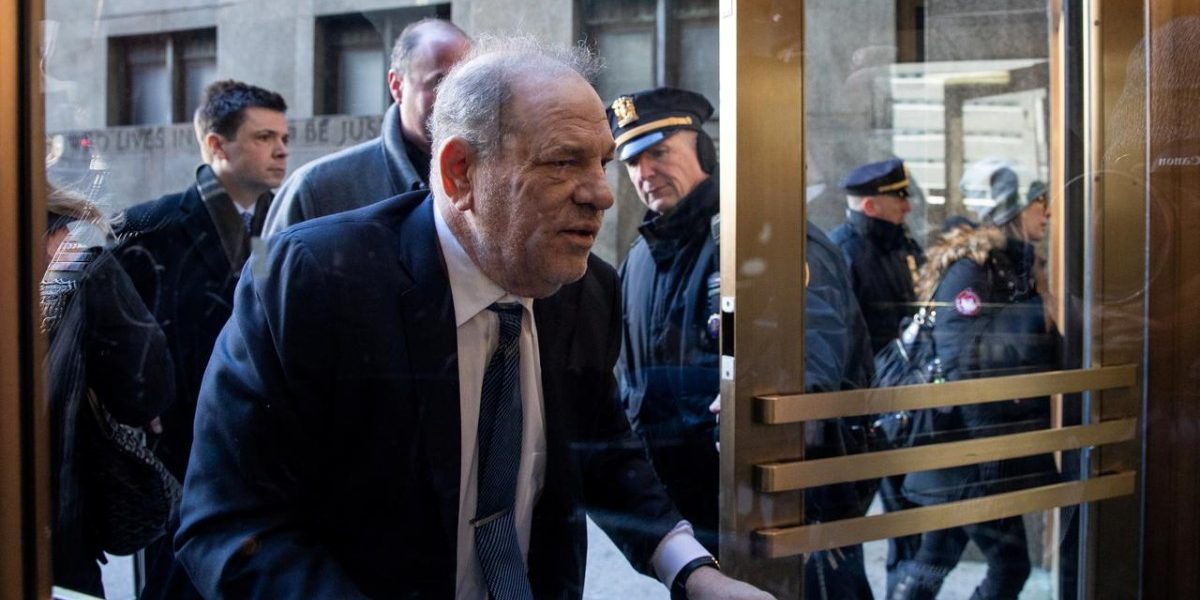 New York: Former Hollywood producer Harvey Weinstein was convicted of sexual assault by a New York jury on Monday, a victory for the #MeToo movement that inspired women to go public with misconduct allegations against powerful men.

Once one of Hollywood’s most powerful producers, Weinstein, 67, was convicted of sexually assaulting former production assistant Mimi Haleyi in 2006 and raping Jessica Mann, a onetime aspiring actress, in 2013.

He faces up to 25 years in prison.

He was acquitted on the most serious charge, predatory sexual assault, which carried a potential life sentence.

During his trial, Weinstein often appeared feeble, entering the courthouse using a walker. He sometimes leaned on his lead attorney, Donna Rotunno, for support.

“He’s taken some good acting tips,” actress Rose McGowan said at the start of the trial on January 6 while staging a protest near the courthouse along with actress Rosanna Arquette and other Weinstein accusers.

Weinstein made his mark with critically acclaimed films such as The English Patient and Shakespeare in Love.

More than 80 women, including famous actresses, had accused him of sexual misconduct stretching back decades. He had denied the allegations and said any sexual encounters were consensual.

Paul Callan, a former New York prosecutor who is not involved in the case, said Weinstein had strong grounds to argue the verdict should be overturned on appeal because of bias, noting that one of the jurors was the author of a forthcoming book on teenage girls and “predatory” older men.

During the trial, prosecutors portrayed Weinstein as a serial predator who had manipulated women with promises to open doors in Hollywood, coaxing them to hotel rooms or private apartments and then overpowering and violently attacking them.

“The man seated right there was not just a titan in Hollywood, he was a rapist,” Manhattan Assistant District Attorney Meghan Hast said during opening arguments.

Seated at the defense table, Weinstein often appeared impassive, though at times he looked intently at his attorneys when they cross-examined his accusers.

During the many weeks of trial, the prosecution methodically elicited graphic testimony from several accusers, including Haleyi, who said Weinstein invited her to his SoHo home after she had worked on one of his television productions.

After she arrived, Weinstein backed her into a bedroom, held her down on the bed and forced himself on her orally, yanking out her tampon, Haleyi told jurors.

A onetime aspiring actress, Mann said that soon after meeting Weinstein she entered into an “extremely degrading” relationship with him that never included intercourse until, she alleged, he raped her in 2013.

She described Weinstein as a “Jekyll and Hyde” character: He was charming in public but often showed terrifying anger when they were alone, Mann said.

At one point, she started sobbing uncontrollably on the stand, prompting the judge to end testimony early for the day.

Weinstein was charged with assaulting Haleyi and Mann, but prosecutors bolstered their case by calling several other accusers as witnesses.

One of these women, Sopranos actress Annabella Sciorra, told jurors Weinstein came into her apartment one winter night in 1993 or 1994 and raped her.

Though the accusation was too old to be charged as a separate crime, prosecutors offered it to show Weinstein was a repeat sexual offender.

Three other women – costume designer Dawn Dunning, model Tarale Wulff and actress Lauren Young – testified that they were enticed into meeting Weinstein for professional reasons and then groped or raped.

Testimony of “prior bad acts” is generally not allowed in criminal trials, but an exception to the law allowed prosecutors to call these women to show Weinstein had a particular intention or a signature pattern of behavior.

Legal experts said the women provided powerful evidence that was difficult for the defense to overcome.

Dunning testified that the producer groped her in 2004 and offered her movie roles in exchange for three-way sex with him and his assistant, which she refused.

Young, a model and actress, testified that the producer trapped her in a hotel bathroom in 2013, masturbated in front of her while groping her breasts, and told her: “This is what all the actresses do to make it.”

Throughout the case, the defense said regret drove the accusers to take consensual incidents and reframe them as crimes.

Weinstein’s lawyers zeroed in on friendly messages and ongoing contact between the women and Weinstein.

During cross-examination of Haleyi, for example, the defense showed her a message she sent Weinstein signed “lots of love” after her alleged attack.

Defense lawyers repeatedly suggested that Mann willingly had sex with Weinstein to advance her career.

Weinstein never testified in his defense, although he told reporters he had wanted to. One of his lawyers said the case was too weak to warrant putting him on the stand.

Weinstein’s lawyer Rotunno told jurors during closing arguments that they were “the last line of defense” against an “overzealous” prosecution and that women were “responsible” for the “choices they make to further their own careers.”

Prosecutors pushed back against claims that his accusers were not credible and the notion that they were responsible for the alleged attacks.

Assistant District Attorney Joan Illuzzi said it was irrelevant whether they had ongoing contact with Weinstein after the alleged attacks.

Illuzzi rejected a defense claim that Mann had a loving relationship with Weinstein, but said it would not matter if she had been “head over heels in love with him.”

Weinstein still faces sexual assault charges in California, which were announced just hours after his New York rape trial began, and dozens of women have filed civil lawsuits against him.