What Happened in the Aarushi-Hemraj Murder Case was a Witch Hunt, Says Lawyer

The Talwars, acquitted by the high court on Thursday, never had a chance to defend themselves properly since the murder investigation was mishandled says Rebecca John. 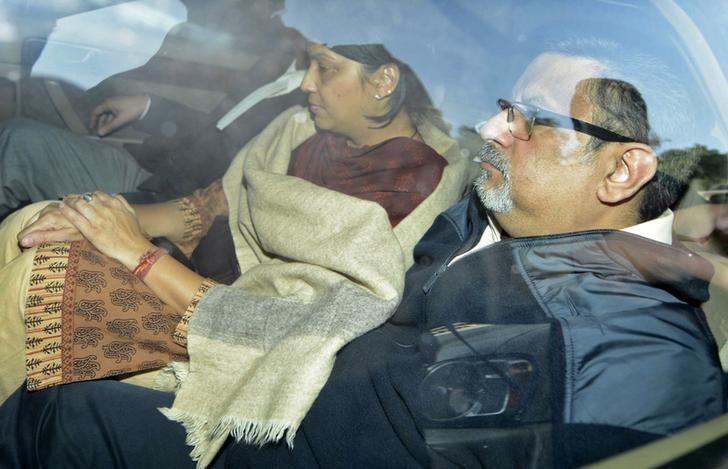 Dentists Rajesh Talwar (R) and wife Nupur are taken to court in Ghaziabad, on the outskirts of New Delhi November 25, 2013. REUTERS/Stringer/Files

Editor’s Note: The following is a verbatim account of an interview with senior Supreme Court advocate Rebecca John, and a lawyer-friend of the Talwars, conducted by The Wire right after the Allahabad high court on October 12 acquitted Rajesh and Nupur Talwar of the crime of murdering their daughter Aarushi and their domestic help, Hemraj nine years ago.

John describes the numerous flip-flops from May 16, 2008, when the murders took place in the Sector 25, Noida flat of the Talwars. She notes that critical pieces of evidence were deliberately overlooked by investigation agencies and that officers tried to manipulate the evidence to suit their narrative. All this, John says, led to a major travesty of justice which she hopes will not be repeated ever again.

I speak as a lawyer and friend. Individual citizens cannot be entrusted with institutional responsibility of investigating cases. Even in respect to a crime committed to a member of their family, they can only assist the prosecution. The job of prosecuting and cracking a crime is left to the police agencies.

As far as Nupur and Rajesh Talwar were concerned, if you were to go back to the start of this case, on May 16, 2008, the child, Aarushi, and Hemraj were murdered, although the latter’s body was discovered nearly 24 hours later.

On May 23, 2008, Gurbaksh Singh, the Inspector General of Meerut range of Uttar Pradesh police, addressed that infamous press conference where he made all kinds of allegations against the minor child and Hemraj as well as Rajesh Talwar.

In June 2008, the first team of Central Bureau of Investigation took over the investigation and there was a period when the domestic help as well as Rajesh Talwar were all in custody. In July 2009, the first team of the CBI after conducting all kinds of scientific investigations came to the conclusion that Rajesh Talwar was not guilty of the crime. They themselves moved an application before the trial court to have him released. Then there was silence for a year and a half and some investigation was going on and then the second CBI team came. And the entire findings were reversed all over again.

Coming to the closure report which was filed in the court in Ghaziabad in 2010, it was really not a closure report. It needs to be understood that it was couched in a language which was accusatory, which was insidious towards the couple for having committed the crime. It was really a document masquerading as a closure report. And at that stage, Rajesh and Nupur Talwar, being the first informants, moved a protest petition giving their version to the best of their knowledge and ability – as it has to be borne in mind that the incident happened in the middle of the night. There were many things they were not aware of.

They also said that there were critical pieces of evidence in the case including the bloody palm prints on the terrace and other bloody footprints and the like. They said all these exhibits should be sent to laboratories abroad for purpose of touch DNA analysis. They were having these conversation with the CBI for months preceding the report the CBI filed in court.

The CBI initially agreed to proceed with the touch DNA but subsequently decided not to do it. Now even after this request was made to the CBI court, they proceeded to summon Rajesh and Nupur Talwar as accused in the case. So really the Talwars did everything they could have done under the circumstances to help the investigation agencies to crack this case.

They did not have the power of investigation and that is the question we should rightly ask the investigation agencies. Why was the couple accused of the crime they never committed? Because the next few years were then consumed in defending themselves in court of law where they first got convicted and then when we filed this appeal in the Allahabad High Court. I had personally appeared for suspension of sentence, but that did not happen. It is only now that the order for acquittal has come.

The question is what happens to the cause, which has been grievously hurt, since the killers of Aarushi and Hemraj have not been identified so far. Which parent will not be keen to get the killers of his or her child arrested. What more can a parent do?

Why were three accused servants let off?

(To a question on why were the three accused servants let off when some of the tests they were subject to had indicated that they were lying, this is what Rebecca John had to say)

These are questions which need to be asked of the second CBI team. We had made allegations against the second team. But apart from the narco tests and other scientific tests, every person is entitled to say that these are not admissible.

The most critical piece of evidence in this case, in fact the only evidence of any substance in this case, was a purple pillow cover which was recovered from the bedroom of one of the domestic helps – Krishna – who was arrested. When it was sent to the Central Forensic Science Laboratory in Delhi, it had found blood stains and when it was sent to a DNA laboratory in Hyderabad, the only specialised laboratory for DNA tests in the country, it stated that the blood on the pillow cover matched with the DNA of Hemraj, the servant who was killed.

This meant that Hemraj’s blood was found on Krishna’s pillow cover. What better evidence did you need to pursue the leads. Now instead of pursuing the matter, it missed the attention of the CBI completely. When we brought this aspect to the knowledge of the court, the-then investigating officer, late A.G.L. Kaul, wrote a letter to the Centre for DNA Fingerprinting and Diagnostics (CDFD), Hyderabad stating “is it possible that this part of the report is based on a typographical error”. He put in that word as a leading question and they responded saying “yes it is a typo” despite it being a 100-page report. Only that was a typo, everything else was fine.

So the dishonesty of the investigation was apparent and I say it that the pillow cover was the key piece of evidence while everything else was a fairy-tale because the police had cleaned up the place and done a lot more.

Victims were not spared insinuation and innuendos

They insinuated and they passed innuendos against the character of a 13 year old child which was inexcusable. The flip-flop of two doctors in this case is also worthy of attention and some prosecution. They having documented in the first instance that there was enough evidence detected with respect to the private parts of the child, two years later changed the version on the basis of some memory and stated that her hymen was torn and vaginal orifices were enlarged. What kind of witch-hunt was this? How were the Talwars to defend themselves when every evidence was overturned in this fashion.

So they were wanting the killers of the daughters to be identified and at the same time they had to defend themselves from a barrage of questions.

Mysterious flip-flops all the way

There were mysterious flip-flops with this case. I see post-mortem reports on a daily basis. Courts look at documentary evidence and accept what is written in it at face value. Now here was a remarkably extraordinary case in which the documentary evidence gathered on the spot spontaneously was ignored and some crazy evidence recorded two years later is accepted. The doctor who had examined Hemraj came to court and said his penis was engorged because he was about to have sex or was in the act of having sex. When confronted with medical jurisprudence, where it was clearly written that in a putrefied body, one of the signs of putrefication is an enlarged penis, he said that is correct and that he made the statement because he was a married man and was making that evidence on personal experience. Now what is the quality of this evidence?

So I think today is the day when we must sit back and look at the way we conduct trials in our country. We also need to look at aspects of fairness of a trial, no matter who is on trial, who is the accused and for what crime. A fair trial is a prerequisite for any constitutional democracy. By denying the Talwars a fair trial, this unrelenting focus of the media on them, the hand-holding of the investigation agencies, it all resulted in grave miscarriage of justice.

The Talwars were at the receiving end of salacious gossip and it all began to masquerade as evidence and facts. So if you look at the so-called evidence which was there against them, it was not evidence you deal with in a normal case. There were merely allegations and reconstructions made in someone’s head. What was the basis of the trial court’s conviction order?

This case throws up many questions and each one of us, be it the media, judiciary or general public, we must guard ourselves against witch-hunting of people, even people who could be under the scanner or needle of suspicion. Everyone has a right to prove their innocence, until proved guilty. Let us not jump to conclusions. What happened to the Talwars is a classic case of a witch-hunt. They were not given an opportunity to defend themselves in a manner which is otherwise available to other citizens.