The social activist couple now plans to approach the high court against the order in the alleged fund embezzlement case. 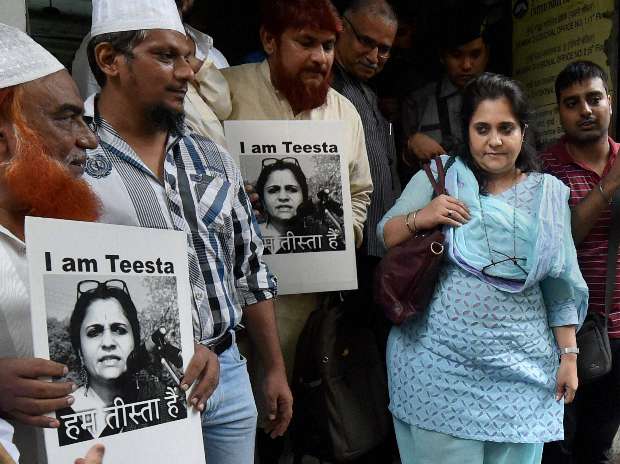 Civil rights activist Teesta Setalvad's NGO has been one of the organisations that have been persistently targetted under the Foreign Contributions (Regulation) Act. Credit: PTI/Files

Mumbai: A special sessions court in Ahmedabad on May 23 rejected the anticipatory bail application filed by social activist Teesta Setalvad and her husband Javed Anand. The application was moved against their possible arrest in the case of embezzlement of Central government’s funds.

According to the Detection of Crime Branch (DCB), the couple’s organisation Sabrang Trust had received Rs 1.40 crore under the central policy ‘Sarva Shiksha Abhiyan’. This money, received for the trust’s “Khoj project”, the investigating agency has claimed was allegedly transferred to their personal account. Upholding the argument made by DCB, the designated special judge P.J. Tamakyvala has rejected the anticipatory bail plea. The FIR was lodged against them in March this year and the couple moved the court immediately anticipating their arrest.

The DCB told the court that the probe had reached a “sensitive stage” and that there is a chance of getting the evidence tampered with.

According to Setalvad and Anand, the Khoj project began in 2010 and had got over well before January 2014 when the bank accounts were frozen due to another case, which they allege is also falsely registered against them. “The only evidence of alleged embezzlement is in the bank accounts. If the accounts in question are frozen, how exactly can they tamper with evidence? This is just a ploy to get police custody,” her organisation, Citizens for Justice and Peace (CJP), has claimed in the statement released soon after the bail was rejected. The statement further claims that normally custodial interrogation is not required in cases of misappropriation of funds and this was just an attempt to use “coercive tactics like torture and intimidation”. The couple now plans to approach the high court against the order.

Th FIR is an outcome of the complaint filed by one of Setalvad’s disgruntled employee Raees Khan Pathan who had worked closely with her at CJP, that extended legal help to riot survivors. According to Pathan, the couple had received Rs 1.40 crore from the Union Ministry of Human Resources between 2010 and 2013. But instead of using the funds in the assigned job, the duo had allegedly diverted the money into their personal accounts.

This is not the first time that Pathan has filed a case against Setalvad. Since their fallout, he has targeted her on several occasions and has also filed a series of complaints against her, including a defamation case.

Setalvad, a vocal critic of Prime Minister Narendra Modi, had accused Pathan of acting at the behest of the present government against her. Pathan is at present one of the members of the Central Waqf Council, a coveted position that he reportedly bagged because of his proximity to the government.