Law minister Ravi Shankar Prasad said that the Union cabinet has approved three amendments to the 'Muslim Women Protection of Rights on Marriage Bill' which has been cleared by Lok Sabha and pending approval of Rajya Sabha. 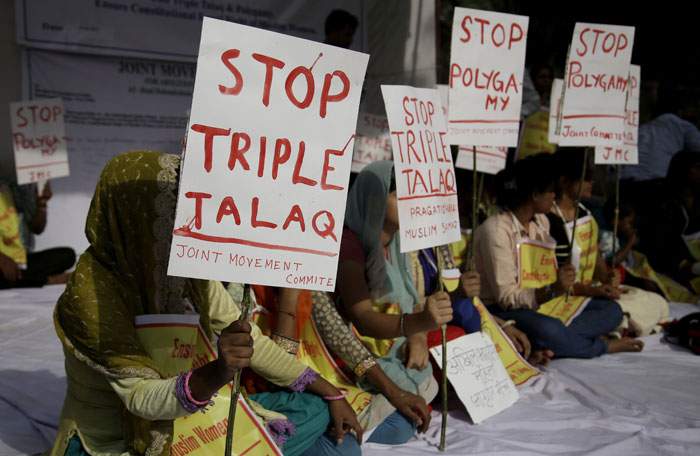 If the bill is cleared by the upper house, it will have to go back to Lok Sabha for approval of the amendments. Credit: PTI

New Delhi: Seeking to allay fears that a proposed law which makes the practice of instant triple talaq illegal and imposes a jail term of up to three years on the husband could be misused, the government today approved certain safeguards in it such as adding a provision of bail for the accused before trial.

Law minister Ravi Shankar Prasad told reporters here that the Union cabinet has approved three amendments to the ‘Muslim Women Protection of Rights on Marriage Bill’ which has been cleared by Lok Sabha and pending approval of Rajya Sabha.

Tomorrow is the last day of the monsoon session of Parliament and the government could introduce amendments in Rajya Sabha. If the bill is cleared by the upper house, it will have to go back to Lok Sabha for approval of the amendments.

While the proposed law will remain “non-bailable”, the accused can approach a magistrate even before trial to seek bail.

Under a non-bailable law, bail cannot be granted by police at the police station itself.

Prasad said a provision has been added to allow the magistrate to grant bail “after hearing the wife”.

“But the offence of instant triple talaq under the proposed law remains non-bailable,” he clarified.

Sources later said the magistrate would ensure that bail is granted only after the husband agrees to grant compensation to the wife as provided in the bill.

The quantum of compensation will be decided by the magistrate, as per the bill.

“There were fears and we have plugged the holes. Nothing has been done under pressure,” Prasad said in response to a question.

Another amendment makes it clear that the police would lodge FIR only if approached by the victim (wife), her blood relations or people who become her relatives by virtue of her marriage.

“This would settle fears that even a neighbour can file FIR as is the cases in any cognisable offence. This would check misuse,” the minister said.

The third amendment makes the offence of instant triple talaq “compoundable”. Now, a magistrate can use his powers to settle the dispute between a husband and his wife.

Under a compoundable offence, both parties have the liberty of withdrawing the case.

Giving instant triple talaq will continue to be illegal and void and will attract a jail term of three years for the husband.

Prasad wondered whether the Congress, the BSP and the TMC would continue to oppose the bill even after insertion of provision of bail.

“Under the Dowry Act, Muslims and others go to jail. They are also jailed under the Domestic Violence Act. Why oppose jail for triple talaq?” he said.

He said the bill should not be opposed by Sonia Gandhi, Mayawati and Mamata Banerjee as it seeks to achieve gender equality.

The minister said in 2017, a total of 389 cases of instant triple talaq were reported. Between January and August last year, 229 cases were reported. “This shows that the bill is required even after the Supreme Court struck down triple talaq as illegal.”

Even after the bill was introduced, 160 cases were reported.

Provision of bail was one of the demands of the opposition parties.

The proposed law would only be applicable on instant triple talaq or ‘talaq-e-biddat’ and it would give power to the victim to approach a magistrate seeking “subsistence allowance” for herself and minor children.

A woman can also seek the custody of her minor children from the magistrate who will take a final call on the issue.