A 55-year-old transporter will be sent to the gallows. His associate, a retired postmaster, was sentenced to life. 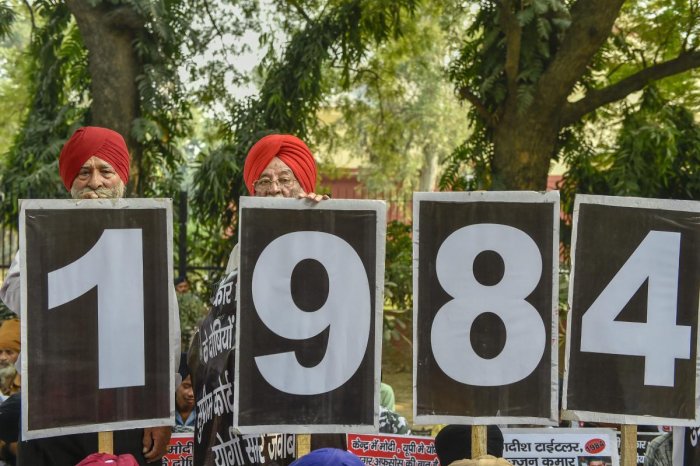 In a major victory for those seeking justice for the 1984 Sikh massacre victims, the first death sentence was pronounced by a Delhi court on Wednesday. Yashpal Singh, who was on November 15 convicted along with Naresh Sherawat for killing two persons in Mahipalpur area, was given the death sentence. Sherawat was sentenced to life. They have both also been fined Rs 35 lakhs each.

The judgement has given hope to the Sikh community that more perpetrators would be brought to book.

Case was reopened by SIT

This judgment also marks a significant turn in the prosecution of the accused. The case had been closed by the Delhi police in 1994, but it was reopened following the constitution of a Special Investigation Team in 2015.

In the riots that erupted following the assassination of then Prime Minister Indira Gandhi on October 31, 1984, over 7,000 Sikhs are said to have been massacred. But official data puts the toll at 3,350 of which 2,733 killings took place in Delhi alone.

After the BJP government came to power in 2014, it constituted a Special Investigation Team to investigate all the cases including those that had been closed. While the SIT found merit in just 12 cases, the Supreme Court held that it had not done proper investigation with respect to 186 cases. Following the apex court’s order, another SIT, headed by former Delhi high court judge S.N. Dhingra, was formed.

Both convicts attacked neighbours, set their shops on fire

Singh and Sherawat were convicted for rioting and murder of their neighbours Hardev Singh and Avtar Singh. They were also held guilty for injuring three other persons – Surjeet Singh, Sangat Singh and Kuldeep Singh.

The SIT in its chargesheet recorded the statements by Kuldeep, Sangat and Surjeet, who had survived the attack, had accused their neighbours Naresh Sherawat and Yashpal Singh of attacking them. The attackers, the survivors said, were part of a mob which set three grocery shops on fire in Mahipalpur on November 1, 1984.

“The three hid themselves in a first floor room along with Hardev and Avtar. The mob forcibly entered the room, assaulted the five men and threw them down from the first floor. They set the room on fire. Hardev and Avtar succumbed to their injuries, while the other three survived. The survivors identified Naresh as the one who was carrying a can of kerosene and Yashpal as the one who lit the fire,” the SIT chargesheet stated.

The case was filed nine years after the riots, in 1993, at the Vasant Kunj police station on the complaint of Santok Singh, Hardev Singh’s brother. Santok had filed an affidavit before the Justice Ranganath Misra Commission that probed the killings.

Key witnesses deposed in the case

In 1994, the Delhi police had closed the case citing lack of evidence. But it was reopened by the SIT in 2016 after it found some vital evidence in it. During the prosecution, the SIT relied on the statements of several of the witnesses. One of them was Avtar Singh’s brother, Ratan Singh, who came to India from Italy to depose in the matter. He recorded his statement last month.

Four doctors from the AIIMS and one from Safdarjung Hospital also made statements. The witnesses also included the then investigating officer and assistant commissioner of police of the anti-riot cell, S.K. Malik. Another key witness was inspector Yogesh, who translated Santok’s affidavit from Punjabi to English.

The judgement on conviction was pronounced by additional sessions judge Ajay Pandey after the hearing on November 15. He held that the offence and culpability of both the convicts fell into the ‘rarest of rare’ category. “They being the influential neighbours of the victims, without any provocation, caused horrendous crime of murder and looting in order to eliminate all five victims [three were injured] just because of their faith, community or religion,” the judge said.

The quantum of the sentence was announced in Tihar Jail, where the convicts are lodged.

The verdict has been hailed by Sikh leaders from different political parties. Punjab chief minister Amrinder Singh tweeted: “Welcome the first conviction by a Delhi court in the 1984 riots case. Justice has finally been meted out to the perpetrators of the heinous crimes. Hope the others involved in the attacks are also soon brought to book for their horrendous and inhuman acts.”

Akali leaders have also lauded the conviction. Union cabinet minister Harsimrat Kaur Badal tweeted: “They killed! They burnt! They raped! Today they hang!! I thank Waheguru for giving Sikhs a ray of hope in today’s verdict against two culprits of #1984SikhGenocide & pray for similar punishment for Sajjan, Tytler, & their partners in crimes against Sikhs!!”

A closure for the families

The case has also brought a sense of closure for the families of the victims. Santok Singh, the complainant, said: “It is a big victory for humanity. We are satisfied with the judgment though we wanted court to award deaths to both the convicts.”

Incidentally, Aam Aadmi Party leader and senior advocate H.S. Phoolka, who has been fighting the cases of the riot victims, for 34 years, also appeared in this case of Yashpal Singh and Naresh Sherawat.

He earlier told The Wire that hearing was recently concluded in a case in which former Congress MP Sajjan Kumar is an accused.