What Will the Legal Challenge to the Modi Government’s Farm Bills Look Like?

The competence of the Union government to legislate on matters which are fundamentally state subjects will be examined by the Supreme Court. 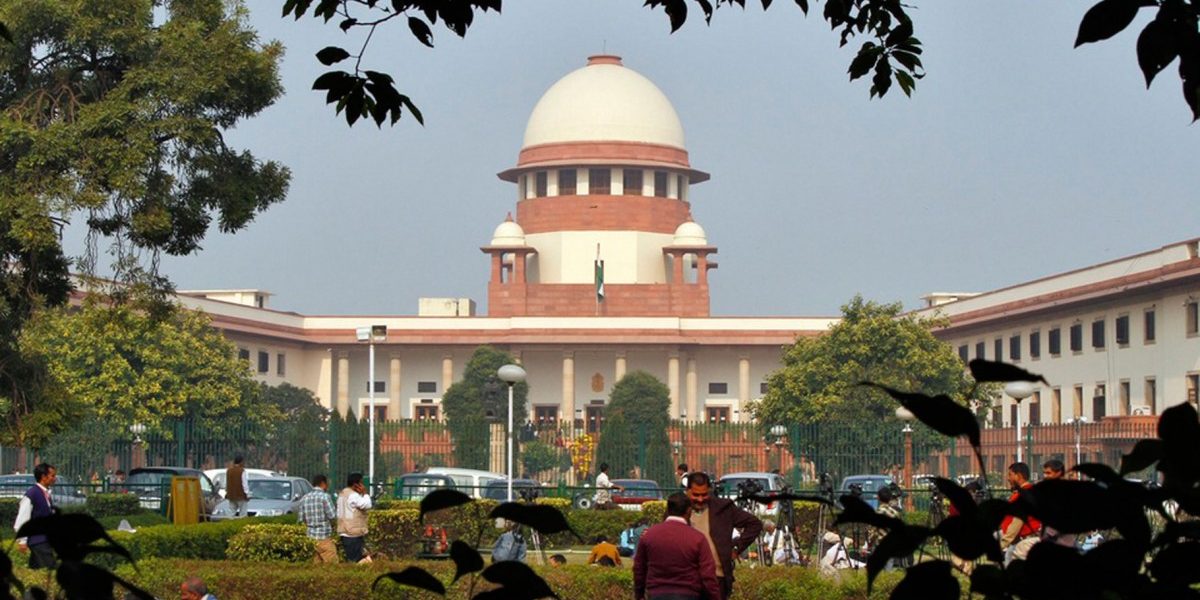 President Ram Nath Kovind has accorded his assent to the Narendra Modi government’s farm Bills – i.e. the Farmer’s Produce Trade and Commerce (Promotion & Facilitation) Bill and the Farmer’s (Empowerment & Protection) Agreement on Price Assurance and the Farm Services Bill – on September, 27, 2020 and therefore the legislative procedure is now complete.

The road ahead for the political parties and people who are opposed to these Bills is to either take the protest route and create a mass movement which may ultimately force the government to have a relook on these legislations – or they may turn to the Supreme Court.

India is a democracy with a federal structure. Legislative powers are distributed through the Seventh Schedule to the Constitution which contains a Union list, a state list and a concurrent list.

It is this Entry 33 of the concurrent list which has been put to use by the Centre to bring these farm Bills. Entry 33 in its current form says:

“33. Trade and commerce in, and the production, supply and distribution of,-

(a) the products of any industry where the control of such industry by the Union is declared by Parliament by law to be expedient in the public interest, and imported goods of the same kind as such products;

(b) foodstuffs, including edible oil seeds and oils;

(c) cattle fodder, including oilcakes and other concentrates;

(d) raw cotton whether ginned or unginned, and cotton seeds; and

Now, industries are also a state subject (Entry 24) but with a rider that parliament by law may declare any industry to be under the control of the Union government if it is necessary for the purpose of defence or for the prosecution of war (Entry 7 of the Union list) or where parliament feels that it is expedient in public interest (Entry 52 of the Union list). 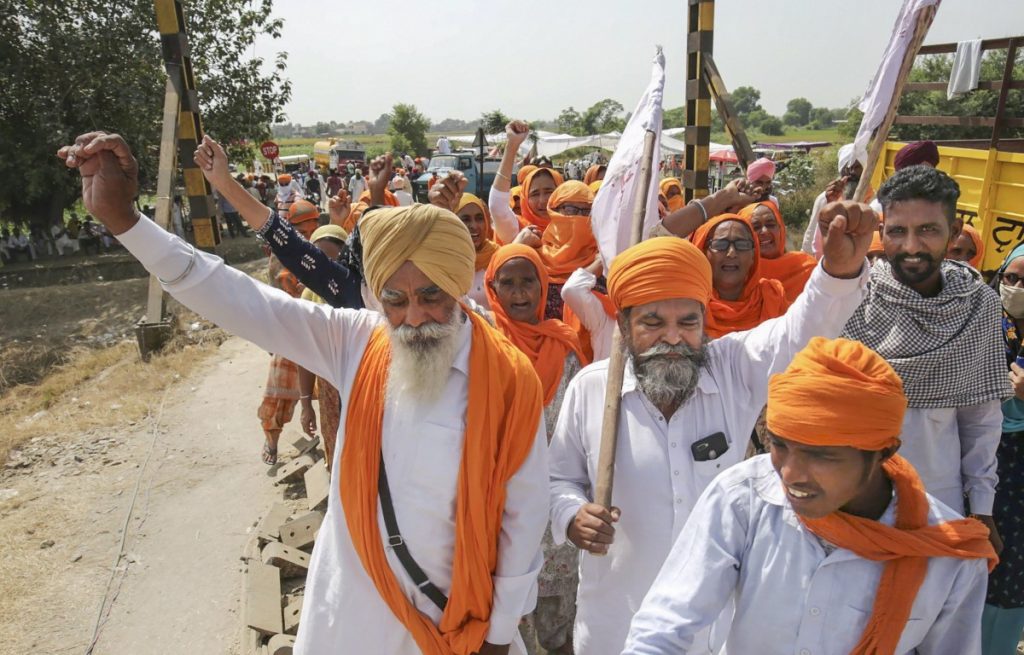 Farmers protest against the bills in Amritsar. Photo: PTI

The framers of the constitution put no such rider with regard to ‘Agriculture’ or ‘Markets’, which shows that these are essentially the state subjects. It is due to the peculiar circumstances Entry 33 in the concurrent list came to be amended by way of the third amendment to the constitution in 1955 and the sub-entries (b) to (e) were introduced.

There is a history and background to the third amendment by which the scope of Entry 33 was enlarged. Trade and commerce within the state and production, supply and distribution of goods were the matters enumerated in the provincial list as per the Government of India Act, 1935. Due to the Second World War, Emergency was declared and the Central legislature acquired the power to legislate on these matters which were in the state/provincial list.

These two enactments were to operate for a period of one year but the lives of these enactments were extended from time to time. The constitution of India came into effect on January 26, 1950, and the Constituent Assembly with a view to carry on with the arrangement whereby the Union government could legislate on certain matters within the state list inserted Article 369 as a temporary provision in the Constitution for a period of five years.

The lives of Article 369 and the Essential Supplies (Temporary) Powers Act 1946 were to expire on January 26, 1955. However, the situation of food articles and other essential supplies in the country was still precarious and the menace of hoarding and black marketing still existed. So, with a view to continue with the same arrangement, four sub-entries were introduced in Entry 33 by way of the third amendment to the constitution. Alongside, the Essential Commodities Act (ECA), 1955 was also enacted.

Therefore, it was the space ceded by Article 369 of the constitution and the Essential Supplies (Temporary) Powers Act, 1946 which in fact came to be occupied by the amended Entry 33 in the concurrent list and the ECA. The Statement of Objects and Reasons appended to the Bill (3rd amendment) is given below:

“Entry 33 of the Concurrent List enabled Parliament to legislate in respect of industries declared to be under Union control. In addition, Parliament was empowered by article 369, for a period of five years, to legislate in respect of certain specified essential commodities. It was not considered advisable that after article 369 lapsed to control the production, supply and distribution of some of these essential commodities. The bill seeks to amplify Entry 33 of the Concurrent List accordingly.”

Thus the amended Entry 33 and the ECA principally equipped the Union government to tackle the scarcity of essential articles, hoarding, black-marketing and irrational price rise, among others, in the country and were never meant to be used generally. The parliament, at the time of carrying out the third amendment, could well have created a separate entry in the concurrent list but it was not done. Rather foodstuffs and other items were grouped with the existing item in Entry 33, which also indicates that the intention of the Union legislature was to resort to these entries in exigent circumstances.

The interpretation which the present Union government has given to Entry 33 is novel. The Union government has tried to it as a standalone provision and it conveniently ignored the context, object and historical background of the sub-entries for reasons which are other than unintended. With the Farmer’s Produce Trade and Commerce (Promotion & Facilitation) Bill, the Centre seeks to take control of the entire intra-state sale and purchase of all the agricultural produce and has trampled upon the entire space which is otherwise a domain of the state governments.

Further, Section 6 of the Bill lays down that the state will not charge any market fee, cess or levy on the trading of farm produce. This is again a clear encroachment on the domain of the states. It is very much within the competence of a state to charge a market fee or cess on the trading of agriculture produce within its territorial space. Entry 33 deals only with trade and commerce of foodstuffs and other items and permits no such inference that the Central government can legislate on the subject of market fee, cess or levy, much less prohibit the state from levying the same.

Further, there is no term such as ‘trade area’ in the constitution. The power to legislate on markets and fairs is only with the state government (Entry 28). The legislation provides no clue as to how ‘trade area’ is different from ‘market’. The Union government cannot whittle down the legislative sphere of the states, nor can an entry in the Seventh Schedule be overridden or rendered otiose by merely employing different terminology.

The above issues pose a legitimate challenge to the two farm Bills in question in their current form. The former chief justice of India P.N. Bhagwati in his interview to Time magazine in 1996 described the Supreme Court of India as the most powerful court in the world and the author believes that once invoked the top court will exercise its extensive powers of judicial review to safeguard and uphold the constitution and its federal structure.

Amit Jaiswal is a practising advocate in the Punjab & Haryana high court with 18 years of standing at the Bar, practising largely on the civil and constitutional side. He is an alumni of the Panjab University, Chandigarh.