The founder member Human Rights Commission of Pakistan and former judge of the Pakistan Supreme Court had gained respect early on in his career when he refused to take oath under the military dictatorship of General Ziaul Haq.

As the debate on the much-delayed restoration of student unions in Pakistan gathers momentum, we celebrate and commemorate a beloved jurist who cut his teeth by taking on cases of detained student activists pro bono in the 1950s.

Just days earlier, in a brief New Year message to his grandchildren, he had reminded them of the importance of planning together, walking together, eating together, and giving “everybody a chance” to improve their lot in life.

A revolutionary, invigorating and inspiring message, particularly given how frail and unwell he was at the time, commented his granddaughter Kulsoom Ebrahim who recorded the video.

Fakhru Uncle, as I called him because of his relationship with my father Dr. M. Sarwar, loved telling the story of how he had got into progressive politics.

It is a coincidence and an irony that he passed away on January 7, the day observed in 1953 as Demands Day by the Democratic Students Federation (DSF), Pakistan’s first nationwide student movement that my father led (between 1949-54).

In 1954, Sarwar, then a medical student, was in prison along with a host of other students and progressive activists. It was young Fakhruddin G. Ebrahim’s interaction with these student political prisoners that contributed to his politicisation after he moved to Karachi in 1950 from Bombay, where he received his first law degree. 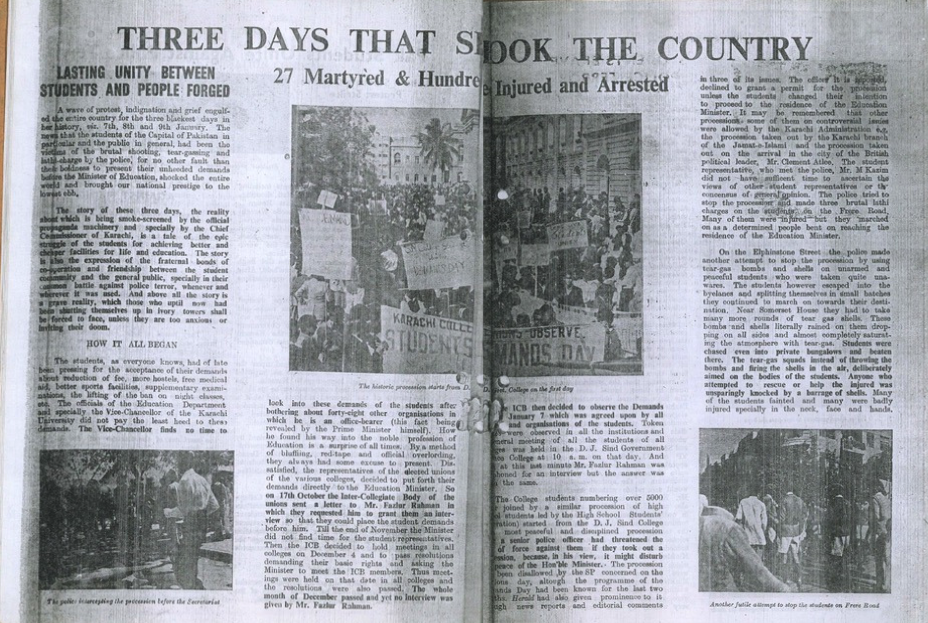 After obtaining his LLM from Sindh Muslim Law College, he set up practice “at a most convenient location,” as he told me, near Karachi Central Jail. One of his first clients was the prominent journalist Z.A. Suleri, incarcerated as an ‘A Class’ prisoner.

While visiting Karachi Jail to meet with Suleri, Ebrahim heard about the students imprisoned there “just for their political convictions” as he remembered. As part of the largely apolitical, business-oriented Gujrati Bohri community, this world was new to him.

But something about the story of the students jailed just for their political beliefs struck a chord in him and fired his imagination. He met with my father and other students and took on their cases pro bono, including that of the legendary Communist Party of Pakistan leader Hasan Nasir.

Hasan Nasir and the students, said Fakhru Uncle, “Weren’t paying me anything so I had nothing to lose. So I became very brave, very courageous, and I gained a ferocious reputation. That’s why I always say it was Hasan Nasir who made a lawyer out of me.”

1. In a country where the mighty fall often and easily, #FakhruddinGEbrahim remained steadfast. He had a passionate, visceral dislike of dictatorship and yet the gentlest of manner for rebuking it. He attained more high offices than one can count

Hasan Nasir remains an icon of resistance, and disappeared in the prime of his youth after Pakistan’s first military coup imposed by Field Marshal Ayub Khan in 1958.

For the student prisoners back in 1953, “It was because of Fakhru bhai that our cases were heard, we were released, and we are here today,” says Iqbal Alavi, paying tribute to his old friend.

In 1954, Alavi was the last of the progressive activists to be arrested. Then a trade union leader with Orient Airways, PIA’s predecessor, he continues to organise for progressive politics through various fora in Karachi including Irtiqa Study Centre, the Hamza Alavi Foundation, and Society for Secular Pakistan, as well as his work with Rotary International.

Iqbal Alavi shared a special bond with Nasir as they both came from Hyderabad. Nasir, the ‘eternal optimist’ as his friends remembered him as, retained his high spirits in prison. When Alavi landed in prison, he found Nasir exulting at the election of D.N. Aidit as general secretary of the Communist Party of Indonesia (PKI), the largest in the world after the USSR and China.

“The leadership is going into the hands of the youth,” proclaimed Nasir, reading an old issue of Newsweek magazine that the imprisoned comrades would squabble over. This was long before the US-backed Indonesian army overthrew Sukarno and massacred his left-wing supporters and other progressive activists in 1965, in what the CIA itself termed “one of the worst mass murders of the twentieth century”.

The students imprisoned in 1954 began to be released one by one after Ebrahim and other lawyers began filing habeas corpus petitions on their behalf and the Sindh high court heard and decided their cases on individual bases. Some were in prison for months, some for a year or more like my father. Iqbal Alavi, the last to be arrested, was the last to be released.

Hasan Nasir was released under general amnesty along with the others a few months later and sent back to India along with the Communist Party leader Sajjad Zaheer. But Nasir sneaked back into Pakistan in 1955 and began operated underground. The military authorities picked him up again in 1958 after Ayub Khan imposed martial law.

The military authorities nabbed Hasan Nasir and carted him off to a dungeon in the infamous Lahore Fort. This was different than being held in a police lockup or prison cell. The Fort was “the seat of power of the dreaded CID and Intelligence Bureau of the time. Where Hasan Nasir could resist the demands of the jail authorities, in the Fort such demands could be taken as resistance that more torture could tame and discipline” as Kamran Asdar Ali notes.

News about Hasan Nasir’s death surfaced in 1960 only during court hearings after Major Ishaq filed a habeas corpus petition seeking information about his whereabouts. Ishaq, of course, was one of those imprisoned along with the poet Faiz Ahmed Faiz in the Rawalpindi Conspiracy Case 1951. They had been sentenced to long prison terms but released in 1957 after their defence lawyer, the eminent Bengali politician Huseyn Shaheed Suhrawardy became Prime Minister in and obtained a reprieve for them.

Fakhruddin G Ebrahim RIP! A rare man of integrity, intellect, humanity, humility and wisdom. We were friends and colleagues. We will all miss him.

As an ad hoc judge in 1981, Fakhruddin G. Ebrahim gained widespread respect for his principled stand in refusing to take oath under the provisional constitutional order imposed by Gen. Ziaul Haq’s military dictatorship. Other judges who took this stand were Chief Justice Sheikh Anwarul Haq and Justice Dorab Patel.

In 1987, the retired judges Fakhruddin G. Ebrahim and Dorab Patel were among the co-founders of the Human Rights Commission of Pakistan launched by Asma Jahangir and friends. This remains the most credible institution and voice for the vulnerable in Pakistan.

The day after Fakhru Uncle passed away in Karachi, students in Karachi and Lahore gathered at the press clubs in their respective cities to express solidarity with fellow students in India who are under fire for standing up for human rights in their country.

The demonstration in Karachi was followed by a discussion at the Press Club about the Sindh government’s approval of a draft law to restore student unions, banned in 1984 by the Ziaul Haq military regime.

The consultative meeting on January 8, presided over by veteran lawyer Justice (retd) Rasheed A. Razvi, developed several recommendations that they will discuss further before presenting to the provincial assembly.

The day of these deliberations is relevant to the student unions’ debate for another reason. “Three days that shook the country” in 1953 were January 7-10 , as headlined in the Student Herald, edited by S.M. Naseem, DSF general secretary at D.J. Science College.

January 2020 has a similar feel not only in Pakistan but also India.

Fakhru Uncle, rest in peace. You leave a fine legacy.

This article was originally published in the Pakistani weekly The News on Sunday, Pakistan of which the writer was the founding editor, 1993-2001.