The Day We the People Took Our First Step

This day, 71 years ago, the Constituent Assembly held its first session. The very process by which the constitution was made holds inspiring lessons in the power of hope, active individual leadership, diversity and dissent. 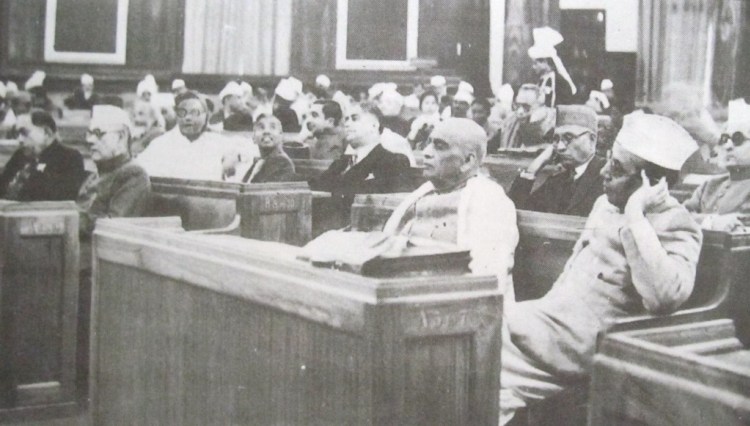 The first day of the Constituent Assembly of India. Credit: Wikimedia Commons

December 9, 1946; 11 am. This date and time marks the start of a monumental social transformation of India. It was on this day that the Constituent Assembly embarked on its journey of making the Indian constitution. From the first session that day till the passing of the constitution on November 26, 1949, the assembly went through a profound churn of debate, turmoil and angst. These crucial three years coincided with a period when the nation itself was born through a process of intense upheaval and torment.

What can we learn from the constitution and the process by which it was made? The answer is: many things; in particular, we can learn about the ways in which we can shape ourselves and our society.

We can learn to hope that even when the chips are down, we have to focus on what is possible. The three years that the Constituent Assembly was working on the document were suffused with grief. Freedom had come but with it came the Partition. The Partition had a direct impact on the size of the assembly, which shrank from 389 to 299 members. The rest had moved to Pakistan.

The assembly could have been devastated by the loss of a fourth of its members, many of whom were close friends and colleagues. But it focused on the strength of the members it still had – the remaining 299. And with this strength, the members of the assembly went on to create the most powerful instrument of development for the country. Our constitution reflects this hope – it provides the structure and guarantee of rights to each and every citizen. Historian Granville Austin described the process aptly when he stated, “Fundamental rights were to be framed amidst the carnage of fundamental wrongs”.

Can we use this learning to create the narrative of a hopeful society – a hopeful you and hopeful me? Too often we give in to negativity. Yes, the state of affairs in the country is somewhat alarming, but it is nothing close to what it was in 1949. When I am in a classroom about half full with girls and we discuss the many challenges that women face, I am reminded of the 15 women who were part of the assembly. Fifteen women out of 389 – less than 4%. Yet, they showed up, made their presence felt. And today, with a vastly increasing number of women who show up – in schools, colleges, factories, companies – we are firm on the path of promise. 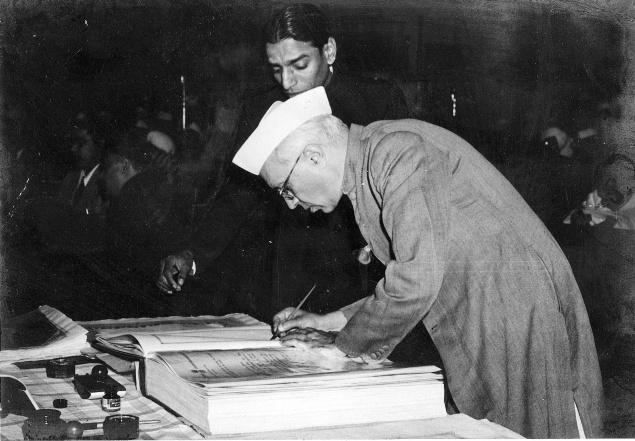 We can learn the idea of leadership – the idea that each one of us can lead and at the same time, collaborate with other leaders. We are familiar with the names of some of the most towering figures of the assembly like Jawaharlal Nehru, Vallabhbhai Patel, Bhimrao Ambedkar and Rajendra Prasad. There were members from diverse streams, such as Hansa Mehta (All India Women’s Conference), Syama Prasad Mukherjee (Hindu Mahasabha) and Somnath Lahiri (Communist Party of India). Each of the members assumed leadership, came prepared, presented different points of view, debated and worked towards a common goal.

Can we then create a narrative of growing big, of growing together? Too often we fall for the myth of the single, strong leader, and assume that in the presence of such leaders, we must give up our own leadership.  Worse, these ‘strong’ leaders fall into the trap of thinking that others must not grow, that their own growth is threatened by the growth of more leaders. And as a society, we shrink. We become small and petty. This is evident in the manner in which the constitution is itself thought of as Ambedkar’s product. He undoubtedly played a significant role, but the constitution was the product of more than 300 people – thoughtful leaders in their own right.

Today, it is critical that we abandon the narrative of hero worship and instead adopt a position of individual leadership in our lives and in our communities. This is what is expected of us as one of our constitutional duties exhorts us to “strive towards excellence in all spheres of individual and collective activity”. Excellence can only be achieved if all of us practice individual leadership. 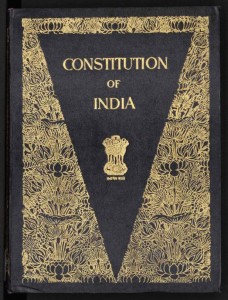 The cover of the calligraphic edition of the Indian Constitution with illustrations representing the styles of the subcontinent’s various civilisations. Credit: Government of India

We can also learn the value of dissent. We can learn that for communities to grow, it is vital that we encourage dissent by inviting very diverse people to the table. The assembly itself was made up of highly diverse people from all parts of the land. They differed in appearance, language, education and ideology, and had noisy and vehement disagreements. The carefully recorded proceedings of the assembly, available online, reveal the extent of disagreement. The master of dissent was Ambedkar himself, with his strong non-Congress views. Yet he led the work of drafting the document with the agreement of all members. The constitution also makes it clear as to what it expects from all people, by elucidating the following fundamental duty: “to develop the scientific temper, humanism and the spirit of inquiry and reform”.

Can we then create a narrative of welcoming dissent – from me as well as you? Too often, we surround ourselves with like-minded people, those who agree with us. As a society, we disintegrate into small groups of people who like each other but cannot stand the others. If India has to grow, we have to nurture dissent in our homes, families, schools and workplaces and yes, in our governance.

Above all, we can learn the centrality of humanist values – learn that the values of equality, liberty, justice and fraternity are at the core of our lives. That even if we behave unequally and unfairly oftentimes, we all crave equality and fairness. That is the reason why the assembly, even when faced with conditions of abject poverty, acute injustice, terrible inequality and divisiveness, chose to enshrine humanist values in the vision and working of the constitution.

All societies have their own epic narratives – mythological, social and political. Sometimes, the narrative becomes insular and is about breaking the spirit of co-existence, as is happening now. At such a juncture there is a need to remember the most epic and humane narrative ‘We the People’ have given to ourselves, as a talisman and as a promise – the constitution of India.

Vinita Singh is Trustee, We the People, a non-profit organisation dedicated to expanding active citizenship in India.