At the Supreme Court, CJI Ranjan Gogoi Sets the Stage for His Tenure on Day One

If his predecessor, Justice Dipak Misra, was criticised for keeping all important subjects to himself while allocating cases, the new chief has demonstrated his keenness to share key subjects with senior colleagues and to clear cases that have been pending for years.

New Delhi: For Ranjan Gogoi, Wednesday was day one in office, having been sworn-in as the 46th Chief Justice of India in the morning by President Ram Nath Kovind. The CJI’s day in Court No.1 began at noon, when he sat with Justice Sanjay Kishan Kaul on his right, and Justice K.M. Joseph on his left.

If Chief Justice Gogoi’s body language and utterances on the first day are of any indication, it is clear we have a CJI who is in a hurry to complete an agenda.

Right at the very beginning, when lawyer Mathews J. Nedumpara got up to compliment him for heading the entire judicial system in the country, the CJI cut him short, saying that such praise is not required in the court room, and asked the lawyer whether he wanted to mention a matter. When Nedumpara said yes, the CJI said he would not permit him to mention it unless the case involved an imminent death or release of a prisoner, or if there was a likelihood of eviction or demolition, thus justifying such an early hearing.

Next was the turn of activist lawyer Prashant Bhushan who sought early hearing of a petition seeking a restraint on the Centre from deporting seven Rohingya men – lodged in the Silchar detention centre in Assam – to Myanmar.

Considering the seriousness of the plea, the CJI agreed to list the matter if necessary. Bhushan submitted that if these men are deported, they face the risk of persecution and even death, as reported by international organisations. Sending refugees back into genocide is a violation of the most basic principles of international law, Bhushan pointed out in an interlocutory application filed in the case. This planned deportation comes soon after the United Nations Human Rights Council’s report called for Myanmar leaders to be held accountable for genocide. 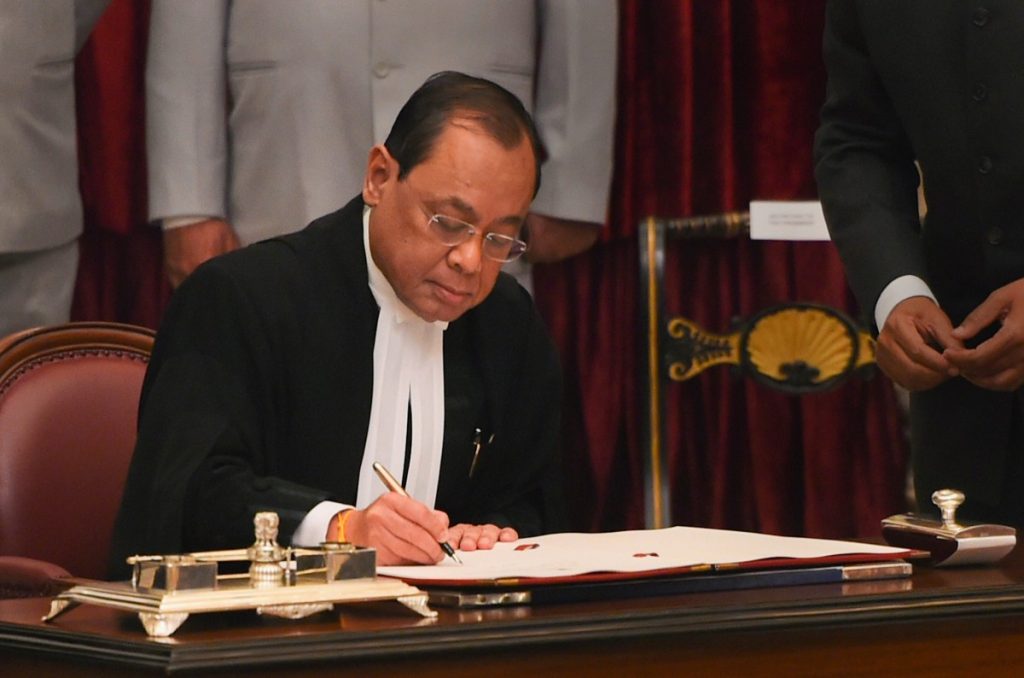 Justice Ranjan Gogoi signs the register after taking the oath of office upon being appointed as the 46th Chief Justice of India at Rashtrapati Bhavan in New Delhi on October 3, 2018. Credit: PTI/Shahbaz Khan

‘Mentioning’ by lawyers in the CJI’s court, before listed proceedings begin, is a convention which takes up about half an hour. What it involves, essentially, is lawyers queuing up to seek an early hearing of a pending case in view of some urgency. The CJI, if convinced, directs the listing of the matter, according to the roster before the appropriate bench – which includes his own.

Also read: A Look Back at Chief Justice Dipak Misra’s Errors of Commission and Omission

Chief Justice Gogoi’s predecessor, Justice Dipak Misra, restricted ‘mentioning’ to advocates-on-record, and denied the privilege of mentioning to senior advocates, who, because of their designation, used to get ‘out-of-turn’ opportunity to be heard, thus depriving juniors in the profession a chance to hone their skills. The change, although it led to some disappointment among senior advocates, got institutionalised in due course, and helped to limit the time spent on it, with the CJI arbitrarily fixing a limit on the number of mentioning cases to be heard for a day.

On his first day at Court No. 1, Chief Justice Gogoi also looked at the practice of mentioning as something of a luxury when the cause-list shows many crucial matters – some of which may fail to reach the board due to paucity of time. Therefore, he said he wanted some time to work out the parameters of regulating the practice. At the felicitation function organised by the Supreme Court Bar Association in the evening, he explained that along with his colleagues, he is trying to evolve a mechanism which would make mentioning redundant, while reducing the gap between the date of filing of a petition and its hearing.

On leniency and being tough

The CJI also told the SCBA president Vikas Singh that he could not shed his image of being a tough judge just in order to appear to be more accommodative and lenient towards new entrants to the profession. The attributes of a judge, long-cultivated, are likely to stay as they are, even when he or she reaches the topmost position, Justice Gogoi seems to suggest.

Mentioning is just one aspect of the administration of the Supreme Court, which Chief Justice Gogoi wants to streamline during his tenure. As master of the roster, the new CJI signalled a momentous change in the allocation of cases among his colleagues right on his first day in office.

If his predecessor came under criticism for keeping all important subjects to himself while allocating cases, Chief Justice Gogoi has demonstrated his keenness to share key subjects with his senior colleagues. Under Dipak Misra, letter petitions and PIL matters were with him alone. Now under Gogoi, Justice Madan B. Lokur also will get to hear letter petitions and PIL matters, as allocated by the CJI. This will strengthen collegiality among the senior colleagues in the court.

Similarly, he would express his displeasure over lawyers who file public interest petitions as petitioner-in-person, and making submissions themselves without giving up the lawyer’s gown. On Wednesday, the target of his ire was well-known public interest litigant-cum lawyer Ashwini Kumar Upadhyay, who withdrew his petition seeking effective steps to end criminalisation in politics, fearing dismissal. 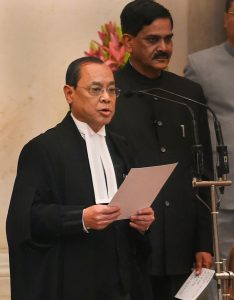 Again, unlike his predecessor, Chief Juatice Gogoi appears to be keen on clearing regular cases that have been pending for years. His first day being a regular hearing day in the court, there were five criminal appeals for/against quashing of criminal proceedings listed before his court. Of these, two have been pending since 2011, while two are from 2015, and one from 2013.

After hearing four miscellaneous petitions, of which two were fresh for admission, the CJI’s bench went on to hear these criminal appeals one after the other. Of the two fresh petitions he heard for admission, one was filed by the NGO, Independent Thought seeking effective steps to end child marriages.  The CJI adjourned the case, in order to implead all the states as respondents. With a keen eye on reducing pendency, on which he is reportedly working on a plan, Chief Justice Gogoi may be expected to unveil his cards on this front in the coming days.

Pendulum swings away from Centre

To attorney general K.K.Venugopal’s suggestion that the retirement age and salaries of the judges be increased, the CJI responded by saying that maintaining the aura and dignity associated with the office of a judge, rather than increasing their retirement age and perks, is likely to inspire future recruits.

The appointment of Justice Surya Kant of the Punjab and Haryana high court as the Chief Justice of the Himachal Pradesh high court on the very first day of Chief Justice Gogoi’s tenure is perhaps an indication that the Centre may finally be forced to cede primacy to the judiciary on the appointments and transfers of judges.

Justice Surya Kant was recommended by the collegium in January this year, and the inordinate delay in clearing his name by the Centre suggested that as the CJI, Dipak Misra hardly bothered to protect his turf.  Chief Juatice Gogoi is expected to be more assertive in urging the Centre and the state governments to fill vacancies in the higher and lower judiciaries expeditiously.

His leadership of the collegium – an institution which some believe had become rudderless in recent years – in making timely recommendations and reiterations in the face of Centre’s apathy, will also be watched with great interest.