Six out of the 15 arrested protesters have gone to the sessions court for bail. 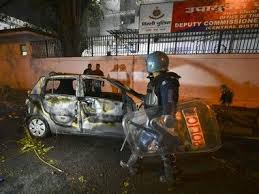 New Delhi: A court on Tuesday sought response of Delhi Police on bail pleas filed by six arrested in connection with a violent Anti-CAA protest at Daryaganj.

A magistrate court had on Monday rejected the bail pleas of all the 15 arrested in the case and sent then to 14 days judicial custody.

The country has witnessed nationwide protests, student agitations against the amended citizenship law.