Not only has Amit Shah stripped Article 370 of its essence, he has abolished the entire state as well, replacing it with two 'Bantustans' in which key decisions on issues like law and order and land will be taken from New Delhi. 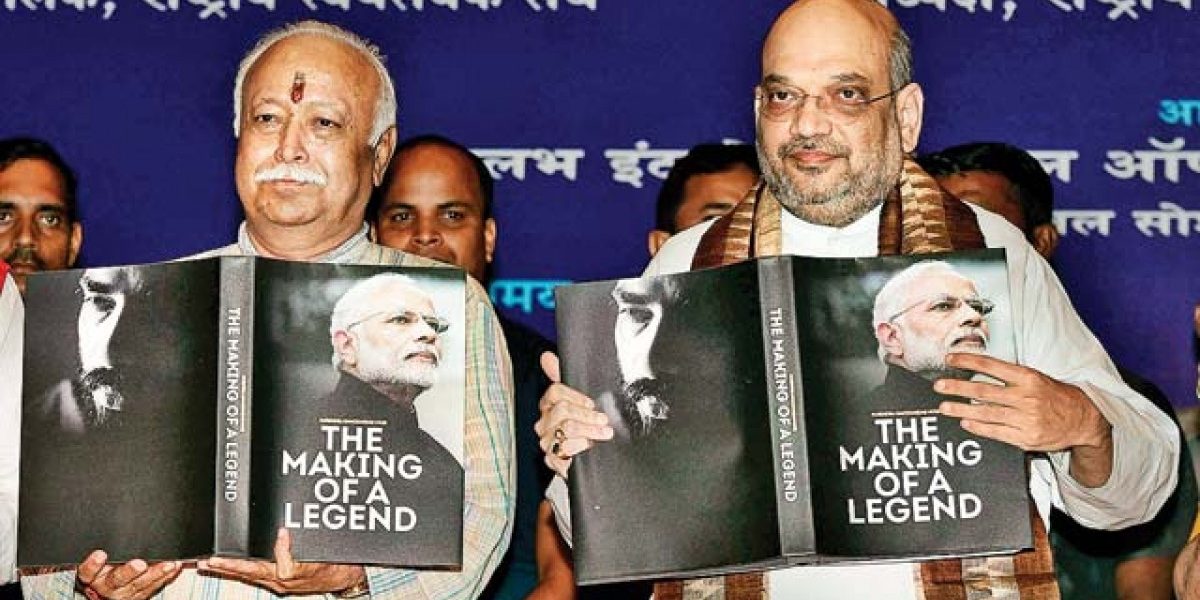 One of the abiding myths of the right-wing in Indian politics has been that Jammu and Kashmir enjoys some sort of unwarranted constitutional status and that the problems there stem from the special treatment Kashmiris receive thanks to Article 370 of the constitution.

From now on, at least, that complaint will no longer apply – with the Rashtriya Swayamsevak Sangh and Bharatiya Janata Party calling their own bluff by doing away with this troublesome article.

Not only has Union home minister Amit Shah stripped Article 370 of its essence, he has gone one step further and abolished the entire state as well, replacing it with two ‘Bantustans’ – grandly called ‘union territories’ – in which key decisions on a range of issues like law and order and land will be taken not by the people and their elected representatives, but by bureaucrats from New Delhi.

So after being pampered and appeased, the poor Kashmiris – whose ‘special status’ brought them benefits such as ‘human shields’, ‘half-widows’, pellet blindings, fake encounters like Pathribal and Machhil, torture and disappearances – need to brace themselves for a bout of tough love.

That Shah’s bombshells were accompanied by the kind of measures one normally associates with a police state – the stealthy introduction of major constitutional changes, the lack of adequate time for debate, the late night arrest of mainstream political leaders in Kashmir, the prohibition of public gatherings, the shutdown of internet services and even landlines – adds the sort of odour one normally associates with coups. The message is clear: there will be no room in Kashmir for free politics of the kind every integral part of India takes for granted.

But as I said, the RSS’s old bluff has now been called – bifurcation and trifurcation of the state has been their old demand, as has the scrapping of Article 370 – and those people in the rest of India who are now dreaming of buying plots of land there will soon get to see just how magical a solution to the problems of the state this will be.

Except, J&K has already enjoyed the rigours of Central rule for nearly 10 of the past 45 years, and has turned out none the better for it. The last 12 months have seen Prime Minister Narendra Modi himself calling the shots, through the president and governor, but the situation there continues to be even worse than it was when the BJP helped run the state government along with the People’s Democratic Party from 2015 to 2018.

Modi’s five-year raj has seen higher levels of violence as his policies have led to increased alienation and, consequently, greater local appeal for the ongoing insurgency. The graph below, based on data the government gave parliament in February 2019 about the number of terrorist incidents in Kashmir and the number of security personnel killed, tells its own story:

In response to opposition objections, Amit Shah told the Rajya Sabha it was a myth that Article 370 was what tied Jammu and Kashmir to India. “It is the Instrument of Accession which made Kashmir a part of India and that was signed in 1947,” he said, two years before Article 370 was adopted.

What Shah did not say was that Article 370 did not drop from mid-air. It was the direct product of a solemn bargain the Union of India struck with Maharaja Hari Singh of Jammu and Kashmir in the very same Instrument of Accession he praised. India became independent from the British on August 15, 1947 but the princely state of J&K, which wanted to be independent, did not accede to India till after it was attacked by Pakistani ‘tribesmen’. Under the terms of the October 1947 Instrument, the Maharaja said – and India agreed – that Kashmir would primarily be acceding in respect of defence, foreign affairs and communications. All other areas were to be subject to the state’s subsequent concurrence.

Shah needs to be reminded of what Article 7 of the Instrument of Accession actually says:

Article 370 was a carefully drafted and negotiated provision that was intended to cement Jammu and Kashmir’s place in the Union on the basis of the conditions under which it acceded to India. For this purpose, Sheikh Abdullah and three others joined the constituent assembly as members and their exchanges with Gopalswami Ayyangar and Vallabhbhai Patel on the drafting committee were sometimes acrimonious. While lots of other states have special provisions in the constitution – there is 371A for Nagaland, for example, which allows legal mechanisms under Naga customary law – none of these flowed from a legal compact like an Instrument of Accession.

From ‘temporary’ to permanent

Article 370 came into being on January 26, 1950 and allowed for the president of India to extend certain sections of the constitution to J&K with the concurrence of the state government. Article 370 also said these would have to be placed before the state’s constituent assembly “for such decision as it may take thereon,” implying that the state’s constituent assembly was actually the final authority as far as presidential orders were concerned.

Since Article 370 is listed as a “temporary provision”, some people imagine it is not a basic structure of the constitution and can thus be done away with. The fact is that yes, it could have been done away with — but only by the J&K constituent assembly, which chose not to do so, thus rendering it permanent.

According to the constitutional expert A.G. Noorani, who has edited the definitive book on Article 370, the Article’s provisions are temporary insofar as the state government’s authority to give its ‘concurrence’ to presidential orders lasts only till the state’s constituent assembly is ‘convened’:

Of course, Article 370 does have a provision for amendment, but this is what it says:

“Art. 370 (3)—Notwithstanding anything in the foregoing provisions of this article, the President may, by public notification, declare that this article shall cease to be operative or shall be operative only with such exceptions and modifications and from such date as he may specify:

Provided that the recommendation of the Constituent Assembly of the State… shall be necessary before the President issues such a notification.”

Amit Shah has tried to get around this hurdle with a two-step process. First, he asserts the power of the president to issue an order that can amend the manner in which another article of the constitution – Article 367 – applies to J&K, and has used this to redefine the term ‘constituent assembly of Jammu and Kashmir’ in Article 370 to mean the state’s legislative assembly. Having resorted to this unconstitutional sleight – something preceding governments, including Congress ones, have also done though not with such lethal intent – Shah then claimed that since the J&K assembly is currently dissolved and the state is under Central rule, parliament can act as a substitute for the legislative assembly and the defunct J&K constituent assembly as well.

This is a truly breathtaking assertion.

“Today this historic session ends and with this the Constituent Assembly is dissolved according to the resolution passed on 17th November, 1956.”

The idea behind saying so was to ensure that with the dissolution of the J&K constituent assembly, the ‘temporary’ nature of Article 370 would be rendered permanent – since the only body capable of effacing or amending it would no longer exist.

This interpretation was upheld by a constitution bench of the Supreme Court in 1959 in Prem Nath Kaul vs State of J&K. However, first Jawaharlal Nehru and then subsequent governments whittled away at the autonomy of the state – including the abhorrent practice of issuing presidential orders that extended additional parts of the constitution to the state – with the backing, regrettably, of two subsequent rulings by the Supreme Court.

While those judgments weakened Article 370, they did not question its permanence. Indeed, in a more recent judgment, Justice Rohinton Nariman has reiterated the impossibility of its abrogation, writing in 2016:

“Despite the fact that it is … stated to be temporary in nature, sub- clause (3) of Article 370 makes it clear that this Article shall cease to be operative only from such date as the President may by public notification declare. And this cannot be done under the proviso to Article 370 (3) unless there is a recommendation of the Constituent Assembly of the State so to do.”

For these reasons, and especially for the fiction of trying to pass off the concurrence of parliament as a substitute for the concurrence of the state assembly (even if we accept the ‘redefinition’ of the state’s defunct constituent assembly as its extant legislature) when the latter stands conveniently dissolved, the Shah-Modi formula of gutting Article 370 by simply pushing through a presidential order will not pass the test of constitutionality.

The disappearance of a state

Along with its ‘special status’, Amit Shah has also ‘disappeared’ the state. By what legal right can the government, or parliament, unilaterally convert the state of Jammu and Kashmir into a Centrally-administered union territory, and then also order its bifurcation?

Under Article 3 of the constitution, this is surely not permissible.

Article 3 says that before parliament can consider a Bill that diminishes the area of a state or changes its name, the Bill must be “referred by the president to the legislature of that state for expressing its views thereon”.

This is an essential safeguard of India’s federal system and has clearly not been followed in this case. In parliament, Shah invoked the legal fiction that since the J&K assembly was dissolved and the state is under Central rule, it is parliament which gets to exercise the prerogatives of the assembly. But think about just how dangerous this logic is. The next time a state like, say Tamil Nadu or West Bengal is under president’s rule, can parliament simply go ahead and vote to abolish that state?

I find it astonishing that regional parties like the YSR Congress and Telugu Desam Party of Andhra Pradesh, the Biju Janata Dal of Odisha and the Aam Aadmi Party have declared their support for this kind of unconstitutional, anti-federal package.

Make no mistake about this – what Amit Shah and Narendra Modi have unveiled on Monday is not just an assault on the unique place that Jammu and Kashmir enjoys in India but on the very federal structure of the Indian constitution. If they spent their first term in office undermining a whole host of institutions, Modi 2.0 will target the one institution that was still somewhat intact – federalism.

Kashmir is a whipping boy to be used to accelerate the Hinduisation of the Indian polity and bring in votes from the rest of the country even if the political and security situation in the state deteriorates. The next goal of the party, and the RSS, is a centralised rashtra in which all states of the Union know their place. Sangh is the word for Union and the Sangh is now clearly supreme.