The Collegium is Under Siege as the Executive Flexes its Muscles

Judges whose rulings have gone against the BJP and its leaders are discovering that their prospects for advancement have been blocked. 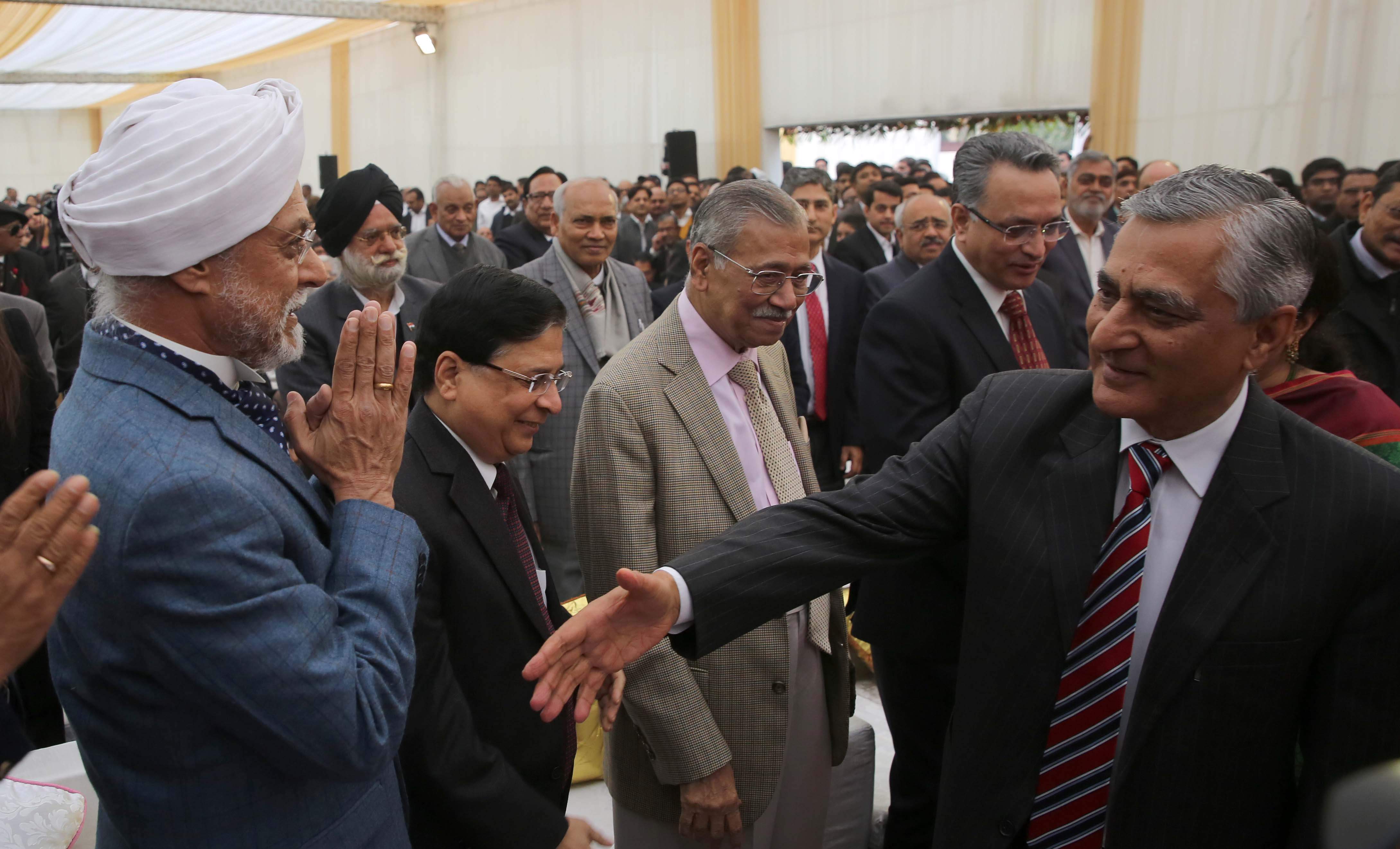 Should the proceedings of the Supreme Court collegium – which clears appointments to the higher judiciary – go unchecked? In larger public interest, I feel the process of appointment must be more open and objective.

The collegium’s recent decisions – non-transparent and secretive – have left the legal world surprised, if not shocked. The decisions do not appear to be objective or independent. Pertinently, these decisions have come after the present Chief Justice of India, Justice Jagdish Khehar, took charge of the apex court on January 4, 2017, after he presided over a constitution bench which delivered the judgment in a case relating to the National Judicial Appointments Commission (NJAC) on October 16, 2015. The court rejected the NJAC Act which gave politicians and others a say in the appointment of judges.

That the collegium has to be objective in its decisions has long been emphasised by the Supreme Court. “The Chief Justice of India, for the formation of his opinion, has to adopt a course which would enable him to discharge his duty objectively to select the best available persons as judges of the Supreme Court and the high courts,” a bench of nine Supreme Court judges said in a judgment delivered on October 6, 1993, in the case of Supreme Court Advocates on Record Association and others v Union of India.

“Due consideration of every legitimate expectation in the decision making process is a requirement of the rule of non-arbitrariness and, therefore, this also is a norm to be observed by the Chief Justice of India in recommending appointments to the Supreme Court,” it observed, stressing that “merit” was the “outweighing consideration” for selecting judges to the apex court.

The rationale behind it, inter alia, was the necessity to “eliminate political influence”; the “constitutional purpose” was to select “the best from amongst those available” for appointment as judges of the superior judiciary.

“It is obvious that only those persons should be considered fit for appointment as judges of the superior judiciary who combine the attributes essential for making an able, independent and fearless judge… Legal expertise, ability to handle cases, proper personal conduct and ethical behaviour, firmness and fearlessness are obvious essential attributes of a person suitable for appointment as a superior judge,” it said.

But the recent decisions on the appointment of judges by the collegium leave much to be desired. The cases of Justice K.M. Joseph, chief justice of the Uttarakhand high court, and Justice Jayant Patel, the senior most puisne judge of the Karnataka high court, are classic examples of the destruction of the “legitimate expectations” of two of the most independent judges in the country. Both seem to be paying the price for their independent judgments in the president’s rule case in Uttarakhand and Ishrat Jahan’s case in Gujarat. These judgments are unpalatable to the Narendra Modi government at the Centre.

Though Chief Justice Joseph was earlier slated to be transferred to Andhra Pradesh by a decision of the previous collegium to which some of the members of the present collegium are party, it has not been implemented. He deserved to be elevated because the law seeks to “select the best from amongst those available”. This is not to comment on the merits of the five recent appointees to the Supreme Court who are equally outstanding. But there are three more vacancies in the Supreme Court today. So why was Chief Justice Joseph excluded?

Justice Patel, appointed on December 3, 2001, is senior to four of the five recent appointees. For no reason he is not being confirmed as chief justice although the previous collegium had recommended the transfer of the incumbent chief justice out of Karnataka to facilitate the appointment of Justice Patel in his place.

More painful is the fact that the collegium has recommended nine judges for appointment as chief justices in nine high courts. Each of them is junior to Justice Patel by periods ranging from two months to four and a half years. Why so?

Justice Patel deserved to be considered for the Supreme Court even directly because Gujarat has no representation on the bench or at least be appointed as the chief justice of an important high court.

The collegium system rests on three Supreme Court judgments known as the Three Judges Cases. In the fourth judgment in the series, popularly recognised as the NJAC case, Justice Khehar (as he then was) held, “…as a proposition of law, we are not inclined to accept the prayer of the Union of India and the other respondents, for a re-look or review of the judgments rendered in the Second and Third Judges cases.”

He further observed, “Secondly, the final intent emerging from the Constituent Assembly debates, based inter alia on the concluding remarks expressed by Dr B.R. Ambedkar, maintained that the judiciary must be independent of the executive.” The appointment of judges to the higher judiciary had a direct nexus with the “independence of the judiciary”, he said.

“When the issue is of such significance, as the constitutional position of judges of the higher judiciary, it would be fatal to depend upon the moral strength of individuals. The judiciary has to be manned by people of unimpeachable integrity, who can discharge their responsibility without fear or favour,” he observed.

He rejected as “clearly questionable” the participation of the Union law minister in the NJAC. “One of the rules of natural justice is that the adjudicator should not be biased,” he pointed out. This meant that that he or she should neither “entertain a prejudice against either party” nor be “favourably inclined” towards them. Further, the adjudicator should not have a conflict of interest as it would have “the inevitable effect of undermining” the independence of the judiciary.

“The sensitivity of selecting judges is so enormous, and the consequences of making inappropriate appointments [are] so dangerous that if those involved in the process of selection and appointment of judges to the higher judiciary make wrongful selections, it may well lead the nation into a chaos of sorts,” he said.

So far so good. Beautiful words, great principles and laudable objectives. But in actual practice, these are empty words.

Take the case of Justice Hemant Gupta, acting chief justice of the Patna High Court, who, according to reports, is being appointed chief justice of the Madhya Pradesh high court. Justice Gupta is facing allegations about financial impropriety on the part of his family members which have resulted in an investigation by the Enforcement Directorate. Newspaper reports state that Justice Gupta has directly “obstructed justice” by interfering in those investigations. So why even consider him and send him to a state whose chief minister is facing serious charges in the Vyapam scam, which has resulted in the death of over 12 people?

Equally disturbing is the case of Justice M.R. Shah of the Gujarat high court. The previous collegium had recommended his transfer to Madhya Pradesh almost a year ago. He continues to be in Gujarat because the Modi government did not agree to the recommendation. The present collegium is a mute spectator to that.

Justice Shah had rendered a judgment in 2009 paving the way for the appointment of Amit Shah as president of the Gujarat Cricket Association. History bears witness to the fact that those who decided the cases of Amit Shah in his favour were rewarded with positions of governor and Law Commission chairman. Interestingly, on March 24, 2011, Justice Shah and his family attended the India-Australia World Cup cricket quarter-final match at the Sardar Patel Stadium, Ahmedabad, in the president’s gallery and were received by Amit Shah’s son and an eminent lawyer. I too was there to watch the match in the president’s gallery.

Questions are also being raised about the decision to elevate Justice S. Abdul Nazeer, an outstanding judge, when a senior and an equally outstanding judge was available in Justice Badar Durrez Ahmed for elevation to the Supreme Court.

The collegium is bound to follow the “norms” laid down in the Second Judges case in the exercise of its powers. Expediency in appointments is required to fill up vacant posts – but not at the cost of compromising the independence of the judiciary. And certainly not at the cost of ignoring its own law.

These questions arise because decisions are taken behind closed doors within the four walls of the Supreme Court. The higher judiciary has refused to allow the applicability of the Right to Information. The entire process is opaque and shrouded in mystery. One hopes that the collegium, which consists of some outstanding judges, will be vigilant in ensuring that wrong appointments are not made so as to push “the nation into a chaos of sorts”.