CJI to Take a Call on Rights of LGBT Community

The petitioners argued that their right under Article 21 of the Constitution (right to life and liberty) encompasses the right to sexuality, sexual autonomy and choice of sexual partner. 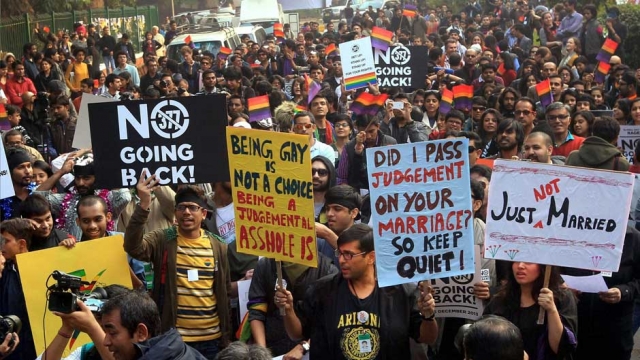 Supporters of the equal rights protesting the Decmeber 11, 2013 decision of the Supreme Court that upheld the section 377 of the IPC. Credit: PTI/File Photo

New Delhi: The Chief Justice of India (CJI), T. S. Thakur will take a call on whether or not to hear a fresh writ petition filed by members of the lesbian, gay, bisexual and transgender (LGBT) community challenging the validity of Section 377 of the Indian Penal Code as it criminalises consensual sexual relations between two consenting adults of the same sex and thus violates their right to life.

The public interest litigation (PIL) which seeks to end the injustice perpetrated by a colonial law, came up for admission on Wednesday before a bench of Justices S. A. Bobde and Ashok Bhushan. Senior counsel Arvind P. Datar, appearing for the petitioners submitted that this was the first writ petition filed by members of the LGBT community, as earlier petitions were filed by NGOs and others. He said the matter had already been referred to the constitution bench.

Justice Bobde told counsel that the petitioners could either await the verdict of the constitution bench or their matter could be referred to the CJI for passing appropriate orders to place it before the constitution bench. The counsel agreed to refer the issue to the CJI and accordingly the bench directed the registry to refer the writ petition to the Chief Justice for his order.

In February this year, acting on a batch of eight curative petitions seeking review of the Supreme Court’s verdict upholding Section 377, a three-judge bench comprising Chief Justice T. S. Thakur and justices Anil R. Dave and J. S. Khehar posted the matter for hearing before a five-judge constitution bench. This gave fresh hopes and a major relief to the LGBT community seeking review of the earlier verdict.

Fresh PIL in the SC

The petitioners submitted that they are the first LGBT persons to approach the apex court seeking quashing of Section 377. The criminalisation of sexual minorities has necessarily meant that LGBT persons have been reluctant to approach this court, in their own standing, out of fear of both prosecution and persecution. With the passage of time, just as this court has recognised that certain social norms may be violative of constitutionally protected fundamental rights, the petitioners have also gained confidence to assert their sexual identities and approach this court for recognition and protection of this most fundamental right.

Sexuality under the constitution

They said their right under Article 21 of the constitution (right to life and liberty) encompasses the right to sexuality, sexual autonomy and choice of sexual partner. The apex court has protected persons who have chosen their conjugal partner in defiance of the caste and religious norms sought to be enforced by a section of the society. The court has asserted a right to bodily integrity and autonomy which is intrinsic to a person’s right to dignity and self-determination.

It was argued that sexuality is an intrinsic, inherent and immutable characteristic of any human being; that its development without social stigma and criminalisation, particularly within the privacy of a home, is an essential component of a life with dignity.  The petitioners pointed out that today medical science has ceased to view homosexuality as an abnormality or a disease. It is now accepted as part of a diverse continuum of the human experience. While so, criminalisation is a dynamic process and reflects the social and political settings of the times.

The petitioners were of the view that the issue in the present writ petition does not concern only removing an injustice perpetuated by a law, but also to take further the constitutional vision of a society that recognises, celebrates and protects the plurality and diversity of the human experience.

The curative petition which is before the five-judge bench challenges both the December 11, 2013 judgment and the January 2014 order, in the review petitions to cure the gross miscarriage of justice. It said, “The effect of re-criminalisation on account of the impugned judgment has caused immense prejudice to gay activists, who have been put at risk of prosecution under Section 377 IPC, on account of the association between homosexuality and penile-anal/penile-oral sexual acts.”

The petitioners drew the court’s attention to the fact that under an amendment introduced in the IPC in 2013, Section 375 of the IPC in 2013 makes penile non-vaginal sexual acts, between man and woman, without consent an offence. By necessary implication, such sexual acts between man and woman, which are consensual, are no longer prohibited. Consequently, “These consensual acts between man and woman have been taken out of the ambit of Section 377, otherwise the amended Section 375 would be rendered redundant. Therefore Section 377 now effectively only criminalises all forms of penetrative oral sex, which makes it ex facie discriminatory against homosexual men and transgender persons and thus violative of Article 14.”