The court said that the tribunal's order posed a threat to federalism. 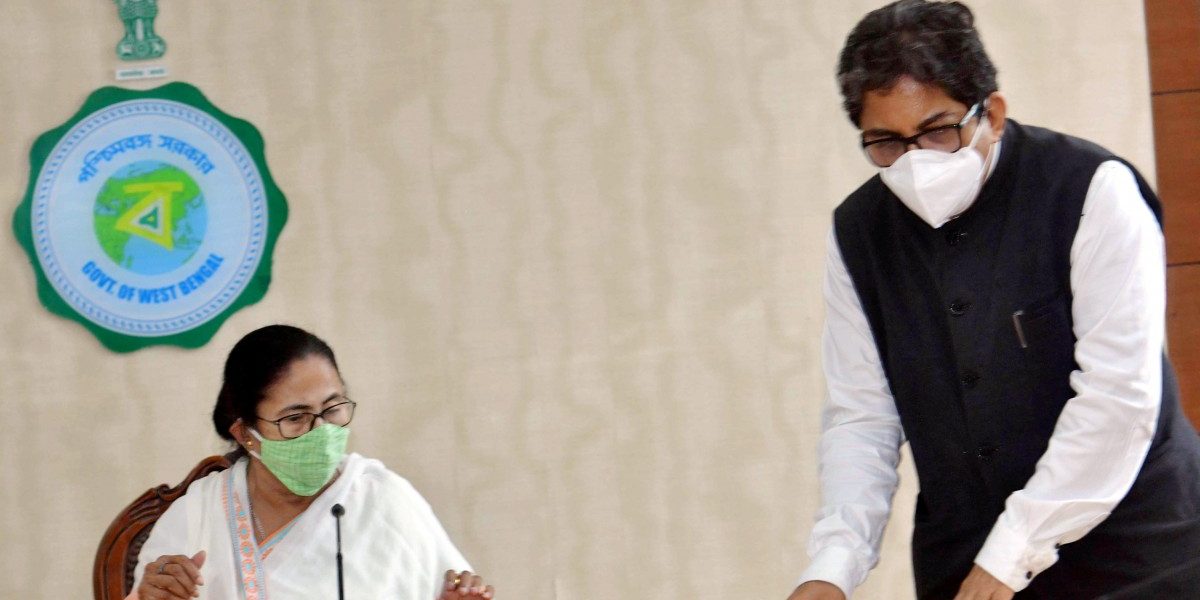 Kolkata: In a major relief to former West Bengal chief secretary Alapan Bandyopadhyay, the Calcutta high court on Friday set aside the October 22 decision of the principal bench of the Central Administrative Tribunal (CAT) to shift the hearing of his appeal from a Kolkata bench to Delhi. The case is related to disciplinary proceedings against him for allegedly not attending in full a review meeting chaired by Prime Minister Narendra Modi in Kalaikunda in the aftermath of the cyclone Yash in May 2021.

A division bench of Justice Sabyasachi Bhattacharyya and Justice Rabindranath Samanta found that the principal bench of the CAT had “acted entirely without its jurisdiction” and “it had no right to finally transfer the matter to itself without a proper notice”. Referring to the “alacrity” with which the CAT acted in this matter, the verdict said, “Promptness is appreciated, but over-zealousness to cater to the fiat of the Government, be it Central or State, is not, by courts of law as a tradition.”

Noting that the Union government has much higher responsibility to serve the cause of justice than any ordinary individual, the bench further said that the whole process “adopted by the Union of India reeks of mala fides”. “It is unfortunate that the principal bench of the CAT nurtured such efforts by passing the impugned transfer order, thereby paying obeisance to the diktat of the Union of India, which has been repeatedly held by the Supreme Court and various high courts not to be a favoured litigant,” the verdict added.

The issue dates back to May 28, 2021 when the Prime Minister visited the cyclone-affected areas of West Bengal, which included a meeting with the chief minister of West Bengal at the Kalaikunda Air Force Station in West Bengal. The chief minister, accompanied by Alapan Bandyopadhyay, the then chief secretary, met the prime minister and handed over a report on the super cyclone.

Also read: Mamata Banerjee’s Bold but Risky Strategy to Position Herself as the Natural Choice To Take On Narendra Modi in 2024

Bandyopadhyay’s counsel told the court that the chief minister then took the prime minister’s permission to excuse herself and the chief secretary from the meeting to continue her pre-scheduled survey of other cyclone-affected areas. However, later that night, the state government received a communication from the Union government requesting the state to release Bandyopadhyay with immediate effect to report to New Delhi by 10 am on May 31, 2021. 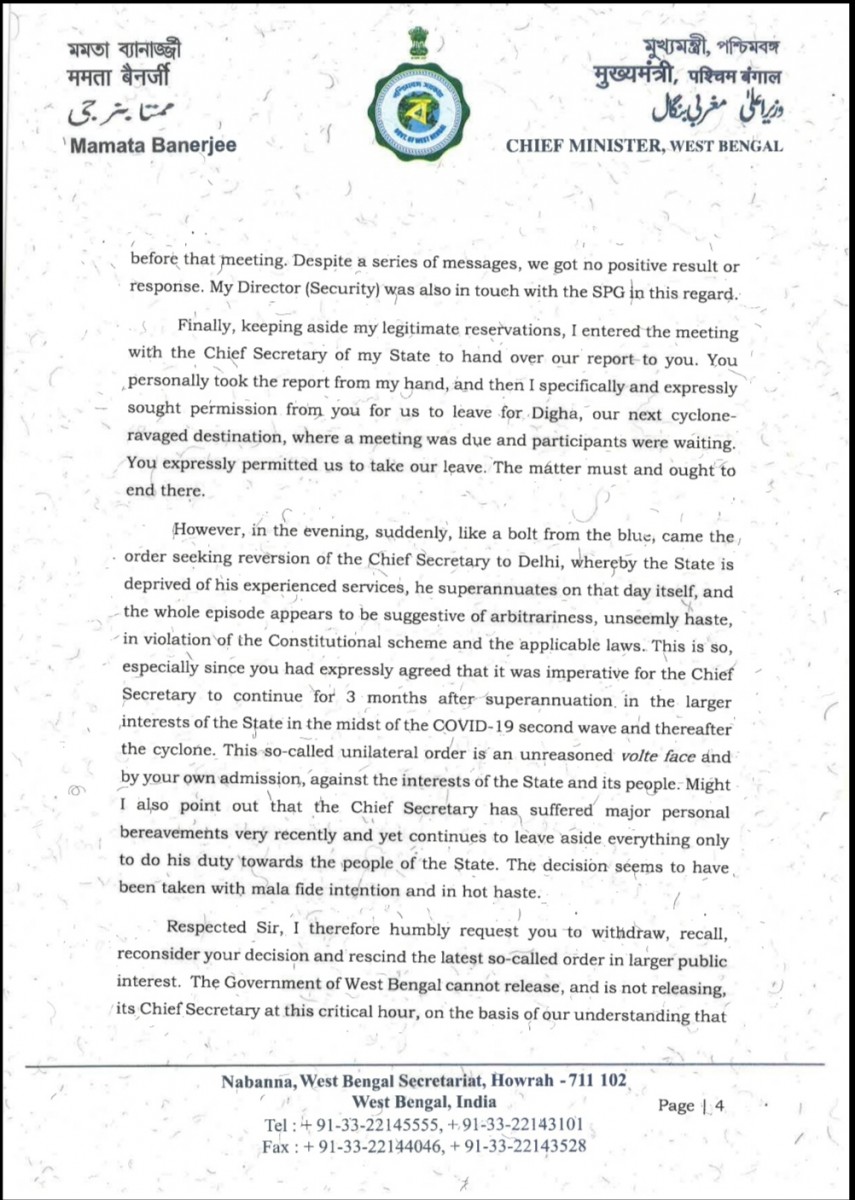 Part of Bengal chief minister Mamata Banerjee’s letter to Prime Minister Narendra Modi where she claims due permission was sought from the prime minister before she and the then chief secretary left the meeting. Photo: author provided

According to Bandyopadhyay’s lawyer, the decision was taken without the consent of the petitioner and/or the state government, although the petitioner had all along belonged to the West Bengal cadre of the IAS and that no post was offered to the petitioner at all. “Thus… such an order was patently illegal and without jurisdiction.”

The state government subsequently had conveyed its decision not to release Bandyopadhyay to the Union government and issued a notification on May 31, 2021 (the date of his superannuation) cancelling the extension of service earlier offered to him. On May 31, 2021 itself, after Bandyopadhyay’s superannuation took effect, a show-cause notice under Section 51 of the National Disaster Management Act, 2005 was issued by the Ministry of Home Affairs.

On June 16, 2021, a charge sheet was issued to the retired IAS officer by the Ministry of Personnel and Public Grievance and Pensions (Department of Personnel and Training). Bandyopadhyay replied to the charge-sheet within due time.

Meanwhile, an inquiry authority was appointed on August 31, 2021, which fixed a preliminary hearing on October 18, 2021 at New Delhi. Bandyopadhyay then filed an application before the Kolkata bench of the CAT claiming that the decision of the Union government to start proceedings against a retired officer and the appointment of the inquiry authority in New Delhi ignoring the issue of jurisdiction were unfair and illegal.

The transfer petition was taken up for hearing on October 22, 2021 by the principal bench at New Delhi and an order was passed on the same day allowing the petition.

Bandyopadhyay had then moved the Calcutta high court claiming his exclusive legal right to file his case before the Kolkata bench of the CAT which was allegedly transgressed by the principal bench by “arbitrarily transferring” the matter to itself. His counsel argued that “the transfer order… is in violation of the petitioner’s fundamental right to equality before the law, as guaranteed by Article 14 of the Constitution of India, as also the right conferred on the petitioner by Rule 6 of the Central Administrative Tribunal (Procedure) Rules, 1987”.

The Calcutta high court heard the matter on October 27 and gave its verdict on Friday. In a strongly worded order, the division bench observed that the transfer application was initiated on the application of the Union of India and, serving notice to the parties and hearing them was mandatory. The court maintained that law does not confer unfettered authority on the chairman of the CAT to exercise his power according to his whims or fancy and notice and hearing must mandatorily be given to the parties and the chairman’s ‘desire to be heard’ has to be qualified by reason and application of judicial mind.

In the present case, the high court said, the petitioner, who resides in Kolkata, “was served with a notice of less than 24 hours in the early evening of October 21, 2021 to appear before the principal bench of the CAT, situated in New Delhi, on the very next morning… Not only that, the principal bench went on to hear out and dispose of the entire transfer petition finally, on merits, on the very next day, by refusing to grant the present writ petitioner reasonable time to come ready with a comprehensive objection, arguments and appropriate citations.”

The verdict said that Bandyopadhyay, “who lives far off from the principal seat at New Delhi’, was refused even a meaningful, let alone adequate, opportunity of hearing or notice. Coming down heavily on the ‘overzealousness’ of the CAT, the Calcutta high court said the tribunal’s actions shocks the judicial conscience, to say the least.”

It found the “hot haste of the principal bench to cater to the pseudo-urgency of the Union of India” inexplicable. “The impugned order of the principal bench not only violates the legal right conferred on the writ petitioner… but also leaves a bad taste in the mouth due to the mode of operation of a quasi-judicial (if not judicial) authority and also poses a threat to the federal structure as envisioned by the makers of the Constitution of India,” the court added.

The division bench also held that since the order notifying Bandyopadhyay’s extension of service had been withdrawn, the principal bench of the CAT “acted entirely without jurisdiction”. Upholding his plea, the bench in its order asked the Kolkata bench of the CAT to hear and dispose of the matter at the earliest.

Speaking to The Wire, his counsel Debanjan Mandal said, “It was a fight of a retired bureaucrat against the might of the Government of India. We were hopeful on the justice delivery mechanism of the courts and tribunals of this country. It was always considered that the decentralised tribunals of the country and territorial high courts will have jurisdiction to decide disputes as raised. This stand has been affirmed.”