The court criticised the state government for the paltry remuneration being paid to members of the committee and lamented that no progress has been made to digitally preserve the valuable source material on Ambedkar's agitations. 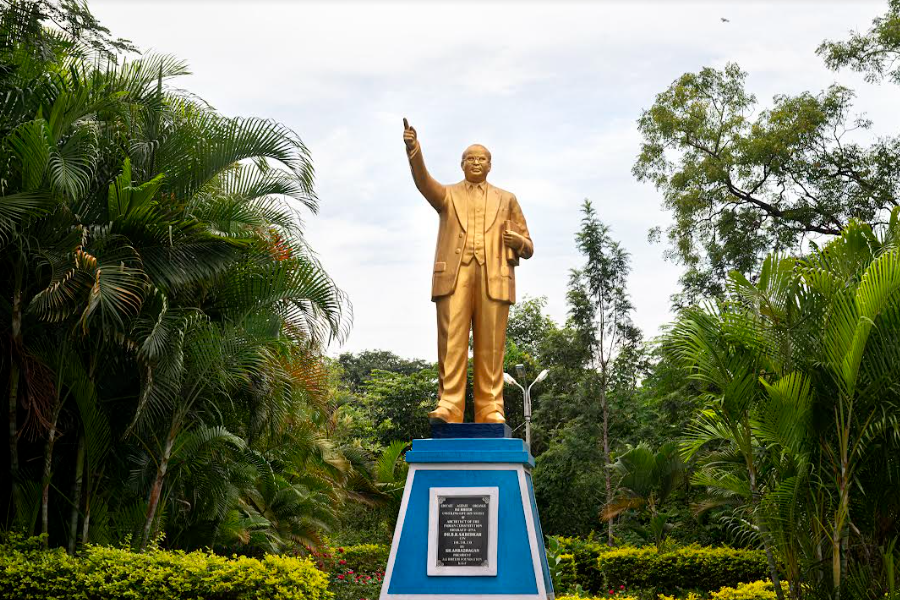 One of many ‘Golden’ Ambedkar statues that came up in the 1980s and 90s, a symbol of hope for the overwhelmingly Dalit population of Kolar Gold Fields mining camps. Photo: Clare Arni.

New Delhi: The Bombay high court on Thursday, August 4, criticised the Maharashtra government for paying insufficient remuneration to non-official members of a committee overseeing the publication of works by Dr B.R. Ambedkar.

The bench of Justices Prasanna Varale and Kishore Sant was responding to submissions made by the state government in an affidavit in a suo motu public interest litigation (PIL) by the court regarding the publication of Ambedkar’s works.

The court had registered the PIL after an article in Marathi daily Loksatta, on November 24 last year had highlighted that progress on a state government initiative to publish the writings and speeches of Ambedkar had been stalled for some time.

In the present hearing, advocate Swaraj Jadhav, prosecuting the PIL, had brought to the court’s notice that the non-official members of the aforementioned committee were receiving a daily allowance of only Rs 250, in line with a 1971 government resolution for allowances to be paid to MLAs. Further, the member secretary of the committee is receiving an honorarium of Rs 10,000 per month plus travel allowances.

In response, the court noted that price rates have changed in the years since 1971 and that paying non-government members of the committee based on these rates was a step “not welcome by the court,” LiveLaw reported.

Noting further that these members reside in various parts of the state and have other engagements as well, the court said that paying allowances of Rs 250 was “not a good gesture by the state government”.

Poornima Kantharia, government pleader in the case, submitted to the court that attempts had been made to strike a tripartite agreement for the publication of two works related to Ambedkar’s agitations – Mahad Satyagraha and Prabuddha Bharat – among the state government, the committee and the private individuals who held the source material for these texts.

Further, it was submitted that an honorarium for the two holders of the source materials – who had proposed their publication – to the tune of Rs 6.5 lakh each had been agreed upon and that said proposers were ready and willing to submit the source material to the state government.

Yet, citing technical difficulties, Kantharia said that the tripartite agreement could not be finalised and that the total of Rs 13 lakh had been redeposited into the treasury. Justice Varale lamented the fact that despite the aforementioned circumstances, the committee was unable to even retrieve the source material and pay the proposers even till 2022.

As such, Justice Varale criticised the state government for conducting meetings “without (them) going anywhere”.

The bench also highlighted the importance of preserving the source documents. “If not taken by the state govt and preserved, there is apprehension that this material may be subject to damage. There is immediate need to see that these materials are taken and preserved by the state government,” the bench said.

Further, the court criticised the budget that had been allocated to the committee for the year 2021-22 – Rs 5.6 lakh – noting that the budget is insufficient if the goal of digitising the documents for their preservation was to be taken seriously.

Also read: They Deify Ambedkar But Don’t Want People to Read His Books

The court also noted that there was a lack of sufficient support staff for the committee and expressed that for the smooth functioning of the committee, the state government should hire permanent staff rather than on a contractual basis, as it has been doing.

Finally, the court noted that advocate Jadhav, prosecuting the petition, has valuable suggestions in the matter and directed him to submit the same to the committee within a week’s time. It further directed that a meeting to discuss all the aforesaid matters should be held at the earliest and that the minutes of said meeting, incorporating Jadhav’s suggestions, should be submitted to the court within four weeks.

“You are not taking any steps for awareness. You will have to make concrete and positive efforts,” the court had said.

In the same hearing, the court had also pulled up the government for the affidavit it had submitted then which it said lacked all the details the court had sought, such as details about the formation of the committee to oversee the project, the names of the members of the committee, whether any meetings had taken place and the remuneration for its members.

“We are not satisfied with this approach (of the government). This is not the way we expect the state government to handle such matters,” Justice Varale had said, directing government pleader Kantharia to file another affidavit in two weeks.