Screenshots tweeted by Saket Gokhale of Vaidya's tweets show that they were made well within the year and that one of them was posted as recently as last month.

New Delhi: Attorney General for India, K.K. Venugopal has refused consent for initiation of contempt of court proceedings against rightwing Twitter user Shefali Vaidya, citing that her tweets were “published over one year ago.” The tweets cited by activist Saket Gokhale in his request to the AG were from November, October and March, 2020.

In a tweet posted by Gokhale, an image of the AG’s reply to the activist shows the former highlighting “Section 20 of the Contempt of Courts Act, 1971, which bars the initiation of any contempt action either suo motu or otherwise after the expiry of one year from the date of the allegedly contumacious conduct.”

The AG then notes that without going into the merits of Gokhale’s request to initiate contempt proceedings against these tweets, this above law makes it evident that “no action can be taken against Ms. Shefali Vaidya” in these circumstances.

How much more openly will the AG shield sympathizers of the Modi govt from contempt proceedings while granting consent against critics of the govt?

When the AG claims 2 month old tweets are a “year old”, how much more blatant does this have to be?

SC must be informed of this.

However, screenshots tweeted by Gokhale of Vaidya’s tweets against the judiciary show that the tweets were made well within the year and that one of them was posted as recently as last month. While The Wire has been able to verify that the three tweets were indeed made in March, October and November of 2020, it is not known whether Gokhale had supplied more tweets for the AG’s consideration, which were from an earlier period.

Nonetheless, the AG’s assertion in his letter that, “I find that each of the tweets has been published over one year ago,” appears to have been an erroneous one.

Notably, the AG’s refusal comes a day after he assented to a law student’s request for contempt proceedings against cartoonist Rachita Taneja over drawings posted on Twitter through her account, Sanitary Panels. These drawings were tweeted a couple of days after Vaidya’s tweet on November 9, in which she wrote, “India doesn’t have a justice system. What we have is a joke!” 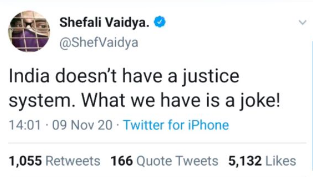 The other two of Vaidya’s tweets which Gokhale had ostensibly sought permission for contempt initiation over are critical of India’s lower judiciary and retired Supreme Court judge, Justice Kurian Joseph’s views on capital punishment, respectively. 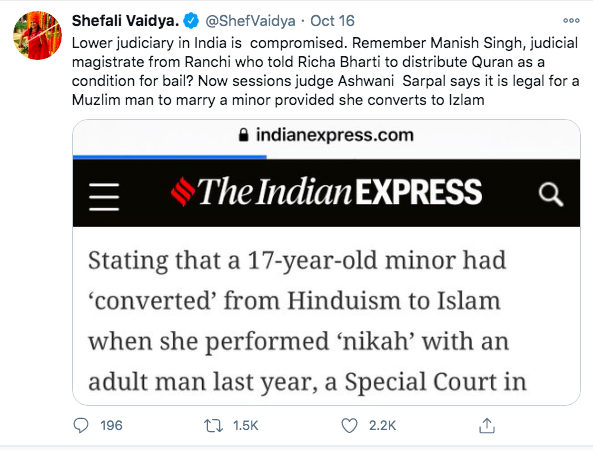 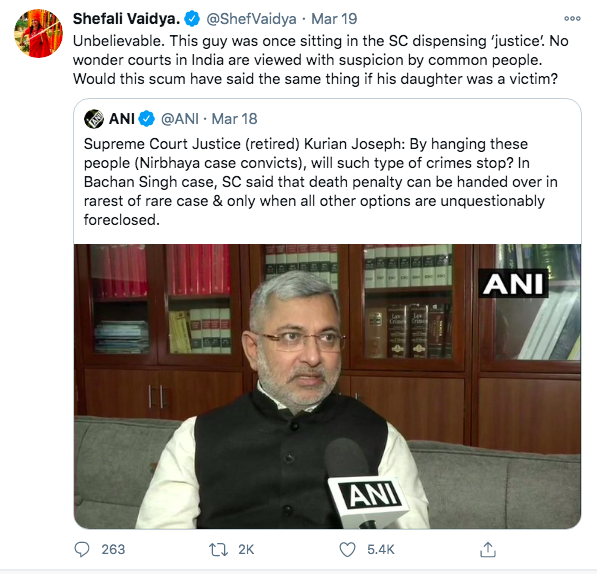 This November, the AG had controversially granted consent to a law student to initiate contempt of court proceedings against comedian Kunal Kamra over his tweets during Arnab Goswami’s bail plea hearing in the Supreme Court.

Later in the month, the AG had declined to consent to the initiation of criminal contempt proceedings against lawyer Prashant Bhushan for tweets in which he was critical of Chief Justice of India S.A. Bobde being provided a special helicopter by the Madhya Pradesh government.