Here's What the AG Wanted to Say About the Judiciary, Before Justice Arun Mishra Stopped Him

K.K. Venugopal was about to give the court the names of judges who had spoken against corruption in the higher judiciary. The Wire has put together the list. 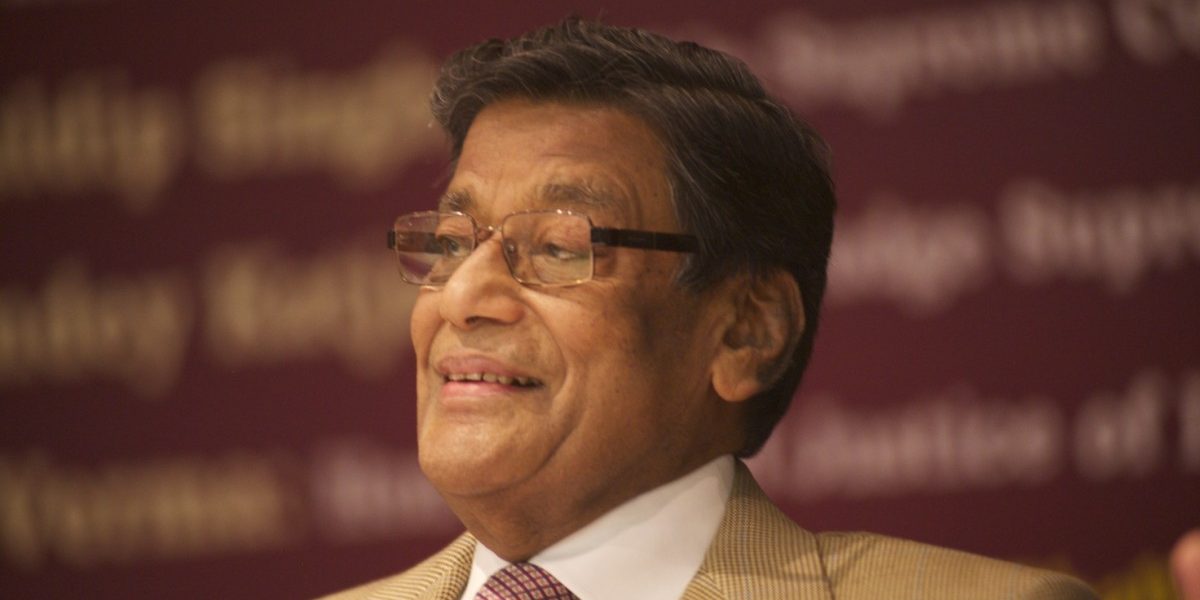 New Delhi: On Thursday, attorney general K.K. Venugopal told the Supreme Court bench of Justices Arun Mishra, B.R. Gavai and Krishna Murari that he has the names of nine former judges of the Supreme Court who have said that there is corruption in higher judiciary. Seven of them, he said, made the remark immediately after their retirement:

At this point, the judges did not allow Venugopal to proceed. Justice Mishra, who stopped the AG mid-sentence said the bench did not want to hear him on the “merits” of the case.

The AG clearly had in mind the four Supreme Court judges who had expressed concerns about democracy at their historic press conference in January 2018 and after, and a fifth, Justice Gopal Gowda, who also has spoken up about the matter. All of their comments have a direct bearing on the contempt case against Prashant Bhushan for his recent tweet.

Venugopal’s reference to judges speaking about corruption, while germane to the charge against Bhushan of ‘scandalising’ the judiciary, also connects with an old contempt case the Justice Mishra bench has revived against Bhushan for an interview he gave Tehelka magazine in 2009.

The Wire has been able to put together the list of judges the AG was likely referring to, and what they said about corruption in the judiciary and the failure of democracy.

He told journalist Kuldip Nayar on the eve of his retirement:

“The judiciary in India has deteriorated in its standards because such judges are appointed as are willing to be ‘influenced by lavish parties and whisky bottles’.”

He reminded the sitting judges of former Union minister of law and justice P. Shiv Shankar’s pungent statement: “Anti-social elements, that is FERA violators, bride burners and a whole horde of reactionaries, found their haven in the Supreme Court.”

Contempt proceedings were sought to be initiated in 1990 against Justice Venkatramaiah before the Bombay high court. The complainant, one Vishwanath, son of Gopal Palshikar, claimed that the judge had scandalised the court by this statement, which was attributed to him in the interview:

“In every high court, there were at least four to five judges who were practically out every evening, wining and dining either at a lawyer’s house or a foreign embassy and that the estimate of the number of such judges was around 90 and that practically in all the 22 high courts in the country, close relations of the judges were thriving.”

Justice Venkatramaiah favoured transferring such judges to other high courts.

In his interview, former CJI Venkataramiah said that in practically all 22 high courts in the country, close relatives of judges were thriving. There were allegations that certain judgments have been influenced through them even though they have not been directly engaged as lawyers in such cases, he said.

“It is hard to disregard the reports that every brother, son or son-in-law of a judge, whatever his merit or lack of it as a lawyer, can be sure of earning an income of more than Rs 10,000 a month,” he said in that interview.

Nayar said in the preface to that interview:

“Sad and sombre, Chief Justice Venkataramiah said that he had vainly tried to bring to the notice of Judges the Law Commission Report which has cited examples to prove how Judges compromise their position and prefer to be seen in the precincts of government houses and elsewhere.”

The government pleader, Badar, citing this portion of the interview, told the court that the entire judgment had to be judged and appreciated in the light of the fact the former CJI’s motive was to improve the judiciary. According to Badar, Nayar did not fail to notice that the former CJI felt hurt while expressing his feelings.

Also read: Contempt of Court Is Not the Weapon the SC Should Wield To Preserve Its Honour

The petitioner before the Bombay high court contended that had the former CJI disclosed the names of 90 judges, it would have been a different matter. But, that not having been done, every judge of the high court became a suspect.

The bench, however, disagreed, and reminded him of a Chinese proverb “As long as you are up-right, do not care if your shadow is crooked.” The bench reasoned that the former CJI’s statement referred only to such judges who were indulging in ‘wining and dining’ at lawyers’ houses or foreign embassies or whose sons, sons-in-law and brothers were minting money by abusing their position.

The bench, however, dismissed the petition on the ground of maintainability as well as on merits.

The interview was published in several newspapers including Lokmat and Dainik Rashtradoot in Nagpur. Both Justice Venkatramaiah and Nayar were made respondents.

On March 2, 1990, Justices M.M. Qazi and B.U. Wahane of the Nagpur bench of the high court dismissed the petition.

In a speech in 2001, Justice Bharucha, the then CJI, lamented that 20% of the judges in India were corrupt. He made this speech during the Law Day function on November 26, 2001 on the lawns of the Supreme Court. In his speech, he refers to what he said in public before assuming office as the CJI.

A petition seeking to initiate contempt proceedings against the former CJI for making this speech was dismissed by the Rajasthan high court later.

Justice Saldahna of the Karnataka high court has been quoted as saying that 33% of the judiciary is corrupt.

During his term as chairman of the Press Council of India, Justice Katju alleged corruption in the Supreme Court. He said three former chief justices of India had compromised in giving an extension to an additional judge of the Madras high court at the insistence of the then UPA government at the Centre, under pressure from one of its allies, the DMK.

“By rejecting Mr Shanti Bhushan’s petition seeking registration of an FIR against Justice C.K.Prasad for gross corruption, the Indian Supreme Court has once again sought to bury corruption by one of its own members under the carpet, forgetting that however much one may seek to conceal it, the bulge will show.

I accuse the Indian judiciary of repeatedly burying corruption by its own members under the carpet.  I accuse it of being hypocritical by speaking against corruption by politicians and bureaucrats, but deliberately protecting its own corrupt brethren.”

Also read: The Gadfly Vs the Holy Cow

In an interview to the Economic Times, Justice Chelameswar said:

“Corruption does exist. Why was Quddusi arrested? A former judge of a high court in this country was arrested…If this institution is discredited, democracy is not safe.  All my effort was to preserve the institution, strengthen it by creating a greater degree of credibility which can only come through transparent functioning. That was my whole effort….Judges will be politically influenced.  To say that judges are not touched by politics, I think is not an honest statement.  And mind you, I am not talking of party politics.   The question is how dispassionately can judges handle the current political events….No direct pressure, but there are subtle ways of putting the pressure (in answer to the question whether there is more political pressure now).”

“There are just 25 judges in the Supreme Court in a country with a population of a billion-plus. And even there, some of them turn out corrupt,” former CJI Venkatachaliah told Anuradha Raman of Outlook in 2011. “The most heinous crime is the CJI incurring criticism, or giving room for doubts that his hands are dirty.”

“The judicature, a sacred instrument with great powers to punish corruption, is itself corrupt. Not a single corrupt judge has been caught or punished.”

In 2013, he wrote to the then president, Pranab Mukherjee, seeking a probe and action against some senior Supreme Court judges who, he said, are “suspect of moral deviance”. He told the president that the scourge of bribery tainting politics had not polluted the judiciary for long, but that was “becoming a matter of the past”.

“I cannot say that there has not been a single corrupt judge even in the Supreme Court. You have that in public knowledge,” Justice J.S. Verma, who was CJI from March 1997 to Januay 1998, told CNN-IBN. He agreed that the rot ran deep in the judicial system.

Justice Verma also revealed that his successor, CJI M.M. Punchhi, was sworn-in despite his reservations because the then prime minister, I.K. Gujral, did not order an inquiry into the allegations which he had forwarded to him, requesting a probe. He said, “When I joined the bar 40 years back, no one talked about corruption even in the district judges. Now when people talk about corruption even in the apex court, I feel like it is a slap on my face.”

“I am happy that Prof. Raj Kumar has also talked about corruption in the judiciary. He has referred to recent cases of impeachment. But in the next edition, he may kindly correct that Justice Dinakaran is not from Sikkim high court, but basically from Madras high court. Both the learned Judges referred to, I cannot defend them. I feel sorry for them. If the judges of the high court today are accused of this kind of things, then what will happen to elimination of corruption? Even then I appreciate the candour and the courage with which Prof. Raj Kumar has attempted this book. This is a very valiant effort.”

Hat-tip to well-known lawyer Parthasarathi Sengupta from Kolkata for helping The Wire to locate the Justice E.S. Venkatramaiah case.