In his order, Justice Suman Sivam has doubted whether the contents of Facebook post alone would constitute a cognizable offence.

New Delhi: Justice Suman Shivam of the Gauhati high court, on Wednesday, October 6, granted bail to an applicant accused of harbouring terrorism and thereby wounding religious feelings through his Facebook post. The court gave bail on the ground that the contents of that post alone cannot constitute a cognisable offence.

The single judge bench comprising Justice Shivam granted bail to Maulana Fazlul Karim Qasimi of Darrang district, Assam, after observing that there is nothing incriminating against him save and except the fact that there is a Facebook post made from his personal account.

“Even if it is accepted that the applicant (for the bail) is the author of the Facebook post, even then, in the absence of other incriminating materials, it is doubtful as to whether, the contents thereof alone would constitute a cognizable offence. In view of the above, I am of the view that further custodial detention of the applicant would be uncalled for in this case,” Justice Shivam wrote in his order.

Qasimi’s counsel, D. Das brought to the court’s attention that another accused, who was arrested for expressing a similar opinion, had already been granted bail on September 23, paving the way for Qasimi’s bail.

But it is obvious that the Assam Police has disproportionately charged the accused with serious offences for merely expressing an opinion on a contemporary international issue, the extent of whose impact on India is still not clear.

Even if the authors of such posts are incorrect in their assumptions, it is unlikely that they may be guilty of serious offences they are charged with. After all, columnists and opinion makers in the media get away with expressing similar opinions, albeit mixed with sufficient nuance, which might be missing in the Facebook posts of the accused.

Let us, therefore, look at the facts on the diplomatic front.

India’s Ambassador to Qatar, Deepak Mittal met the Head of Taliban’s Political Office in Doha on August 31. The meeting took place at the Embassy of India, Doha, on the request of the Taliban side, says a press release of the Ministry of External Affairs, New Delhi.

Despite India’s serious reservations about the Taliban, many analysts have advised the Indian government to find opportunities to engage with the group in a manner that might take care of its own strategic interests in Afghanistan. India is said to be maintaining studied silence against the backdrop of a discreet outreach effort by senior Taliban leaders, according to a report.

Another report quotes foreign secretary Harshvardhan Shringla as saying that India’s talks with the Taliban thus far had been reassuring and reasonable, but the Indian government continues to approach the new regime in Kabul cautiously. 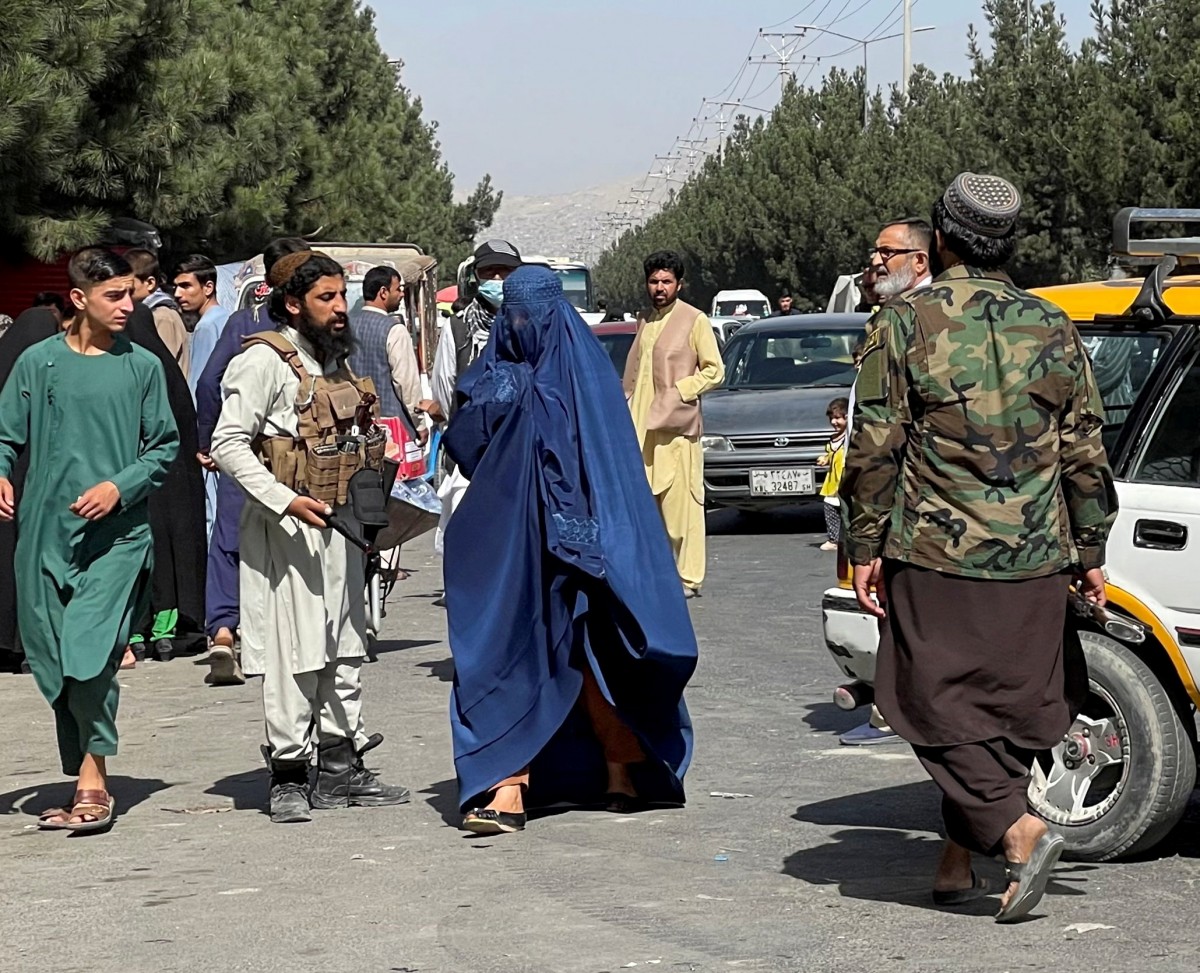 Taliban forces block the roads around the airport, while a woman with Burqa walks passes by, in Kabul, Afghanistan. August 27, 2021. Photo: Reuters

But for the Assam Police, social media posts supporting the Taliban are anathema, and allegedly violate the law of the land.

At least 15 people were arrested from across Assam for social media posts allegedly supporting the Taliban takeover of Afghanistan. They have been booked under different sections of the Unlawful Activities (Prevention) Act, Information Technology Act and the Indian Penal Code. Obviously, the Assam Police does not appear to be concerned that their actions may make Indian diplomatic efforts complicated, and difficult, given the misleading inferences that the Taliban leaders may draw from them.

That apart, the Assam Police may have to answer whether these arrests over Facebook posts about Taliban are justified given the delicate options for Indian diplomacy in Kabul and the differing perceptions among the opinion makers in India on the changing nature of Taliban and how India ought to deal with the new regime in Kabul. If such dissonance is permissible in the public discourse about the changing nature of Taliban, some authors of Facebook posts cannot be faulted for assuming that perhaps it may no longer be politically correct to see a nexus between Taliban and terrorism.

Justice Shivam’s order is significant also because there have been indiscriminate arrests of authors of Facebook posts in several states merely because they chose to express opinions which hurt a section of the society or were unpalatable to a few political leaders who are in power.

All such arrests would have become untenable if only the police had the obligation to corroborate the contents of the posts with other evidence in order to sustain the charges at the threshold stage.

Justice Shivam’s suggestion that apart from the contents of the Facebook posts, which were deemed controversial, the police ought to get corroborative evidence to sustain the prosecution of their authors for various offences they are charged with, is a welcome test, if at all it is made mandatory at the threshold stage.

Very often, the police set the criminal law in motion in such cases, merely on complaints from others, or from their own shoddy investigation, without taking steps to corroborate perceived offences of authors of such posts with other evidence, if available.

Once the law kicks in resulting in the arrests of the accused, the process itself becomes the punishment, let alone the possibility of the accused getting relief from the courts at the appropriate stage, in the form of bail or acquittal after a lengthy trial.

The grant of bail in this case clearly shows that the police used the penal provisions against the accused, without complaining to the Facebook to take action for content violations, if any. Facebook claimed that it took action against 3.2 crore posts in India for various content violations in August. It claimed to also have received 904 user reports through its Indian grievance mechanism between August 1 to August 31. It provided tools for users to resolve their issues in 754 cases. These include pre-established channels to report content for specific violations, etc.

For Facebook, the censured content includes those related to spam (2.6 lakh), violent and graphic content (26 lakh), adult nudity and sexual activity (20 lakh), terrorist propaganda (2.7 lakh), organised hate (31,600) and hate speech (2.4 lakh). Insofar as the Assam cases pertain to allegations of  terrorist propaganda, organised hate and hate speech, it needs to be asked why the authorities did not approach Facebook’s grievance resolution mechanism to take down the allegedly harmful posts.