"I was branded as a Maoist but now the court has shown that the NIA was used to stifle the anti-CAA movement. This is a victory for the Indian judiciary," Gogoi has said. 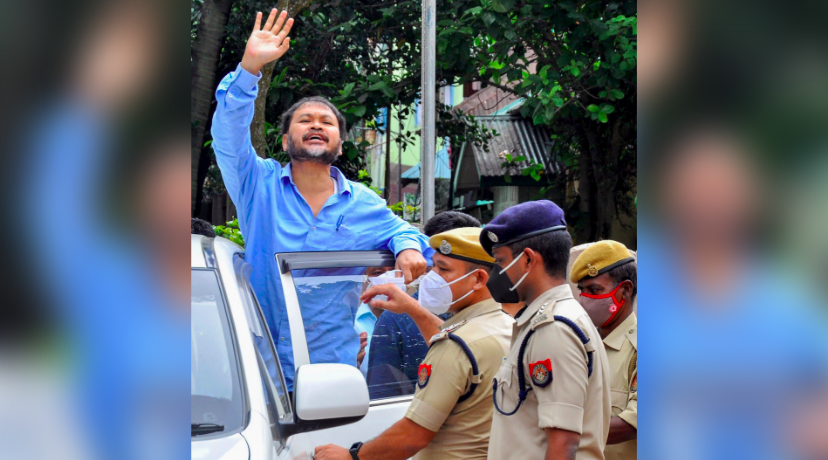 Akhil Gogoi waves from outside the NIA court in Guwahati on Thursday, July 1. Photo: PTI

Guwahati: In a major setback to the Union and Assam governments, activist and Assam MLA Akhil Gogoi was on Thursday acquitted of all charges in the second of two cases being investigated by the National Investigation Agency, in which he was booked under the Unlawful Activities (Prevention) Act. The NIA court judge observed in his judgment that it is necessary for the NIA to note that the “ambit of sedition does not get stretched beyond permissible limits.”

Gogoi, newly elected from the Sivasagar constituency, had been in jail for the last 18 months. Several cases had been filed against him by the Assam police following protests led by Gogoi and his organisation, the Krishak Mukti Sangram Samiti, against the Citizenship (Amendment) Act in late 2019.

Two of these cases were taken over by the NIA which accused him having ‘Maoist’ links and being involved in ‘seditious activities’.

The 120-page judgment by NIA judge Pranjal Das had some observations on sedition. “Though the law of sedition continues in our statute book, its colony [colonial] legacy cannot be overlooked,” he wrote.

He made reference to a 1950 case, Tara Singh v/s State where it was stated, “India is now a sovereign democratic State. Governments may go and be caused to go without the foundations of the State being impaired. A law of sedition thought necessary during a period of foreign rule has become inappropriate by the very nature of the change which has come about.”

Das further elaborated, “Nevertheless, as long as it remains on the statute book in the present form, for enforcing the law on sedition, it is desirable for the investigating authorities to be continually trained to conform to the parameters of the law of sedition laid down by the Hon’ble Supreme Court in Kedar Nath Singh... This is to ensure that while enforcing this penal law by police and other investigating agencies, the ambit of sedition does not get stretched beyond permissible limits imposed by the Hon’ble Supreme Court.”

Also read: Assam: NIA Court Acquits Akhil Gogoi in One of Two UAPA Cases Against Him

Three other anti-CAA protesters were acquitted along with Gogoi on Thursday in the pending Chandmari police station case, to which the NIA had introduced UAPA charges.

Gogoi, along with Manas Konwar, Dharjya Konwar and Bitu Sonowal, were all named in FIR no 1688/2019 by the Chandmari police station on December 13, 2019.

After his acquittal on Thursday, Gogoi was taken to the state-owned Gauhati Medical College Hospital (GMCH) where he has been receiving treatment for his multiple ailments.

He said, “I was branded as a Maoist but now the court has shown that the NIA was used to stifle the anti-CAA movement. This is a victory for the Indian judiciary.”

Thursday’s decision to acquit Gogoi comes nine days after the same NIA court on June 22 acquitted him in another UAPA case which had been filed by the sub-inspector of Chabua police station in Dibrugarh district on December 10, 2019.

The FIR (no 289/2019) accused Gogoi of ‘causing economic blockade, pelting of stones (which had hurt the police personnel) and leading a mob of six thousand in Chabua town’ during the CAA protests.

The charges against Gogoi and others included unlawful assembly, rioting, wantonly giving provocation with intent to cause a riot, promoting enmity between different groups on the basis of religion, race, religion, and language, assault or criminal force to deter public servants from discharging duty, causing damage to public property, etc.

The UAPA charges brought by the NIA accused him of terrorist acts with the intent to threaten the unity, security, and sovereignty of India.

His acquittal on Thursday also comes two days after the NIA filed additional charges (and brought up the presentation of a ‘protected witness’) against him in the Chandmari police station case.

Gogoi’s wife Geetashree Tamuly and KMSS supporters have said that these charges are “a conspiratorial move on the part of the BJP-led state government to keep him incarcerated with one petty charge after another.”

His acquittal, on the other hand, has been widely hailed by the KMSS, and its political wing, the Raijor Dal, as a victory for Indian democracy and for dissenting voices.

Tamuly said, “This is not just Assam’s victory but India’s and a victory for the Indian democracy. This is also a victory for the Indian judiciary, and it is independence. Today’s decision is an inspiration for those who are not afraid to raise their voices. There is such an atmosphere in our country that people have been scared to speak out freely. Akhil’s acquittal is not a personal matter for me but a matter for the Indian republic and for those people who are trying to preserve its democratic roots.” 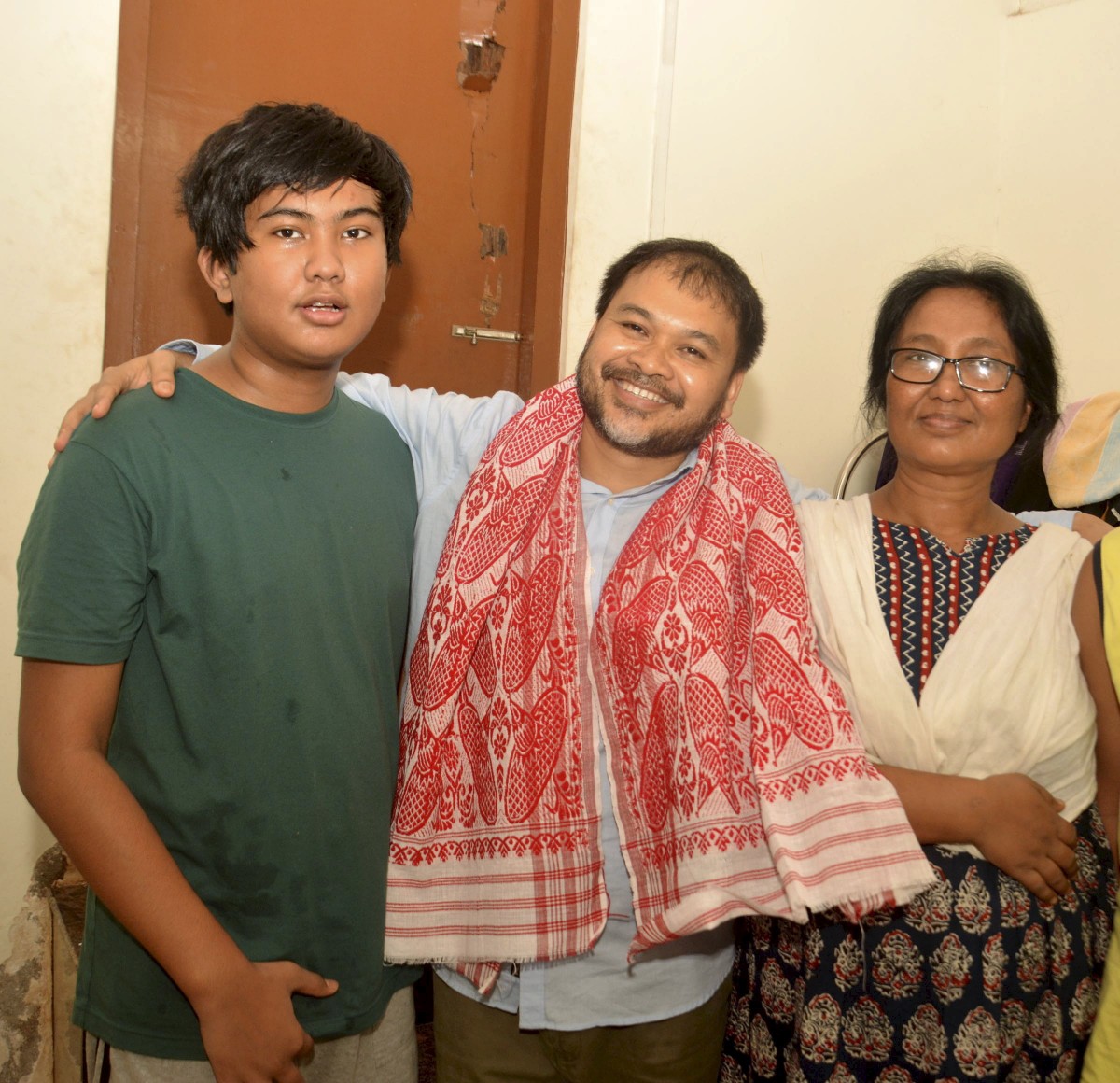 MLA Akhil Gogoi with his wife and son after an NIA court granted 2 day parole to him on humanitarian grounds, in Guwahati, Friday, June 25, 2021. Akhil Gogoi was arrested on December 12, 2019 for his alleged involvement in anti- CAA protest. Photo: PTI

Outside the NIA court, KMSS functionaries and Gogoi’s aides Bitu Sonowal and Dharjya Konwar told reporters that the verdict did not take away from the fact that a lot of time was lost.

“Akhil da lost a year and a half in jail. We lost seven months of our life in prison. [However] This is a historic decision. It will serve as a lesson for those who are trying to infuse fascism into our polity. There was a conspiracy to frame Akhil da under petty charges ranging from cow smuggling to others. For the past 18 months, we have been under tremendous pressure,” the activists said.

Gogoi’s release was welcomed by people from all political corners. Upamanyu Hazarika, convenor of the  Prabajan Virodhi Manch, said the judgment should be seen as a “stern warning to the ruling class against the use of undemocratic means to quell opposition.”

“It is singularly unfortunate for our democracy that political opponents are muzzled by slapping false charges and that Gogoi was deprived of his personal liberty while resorting to democratic means of protest. The judgment of the NIA court re-affirms public faith in the judiciary,” he said.