Witnesses in cases against the self-styled godman have been attacked and killed one after the other. 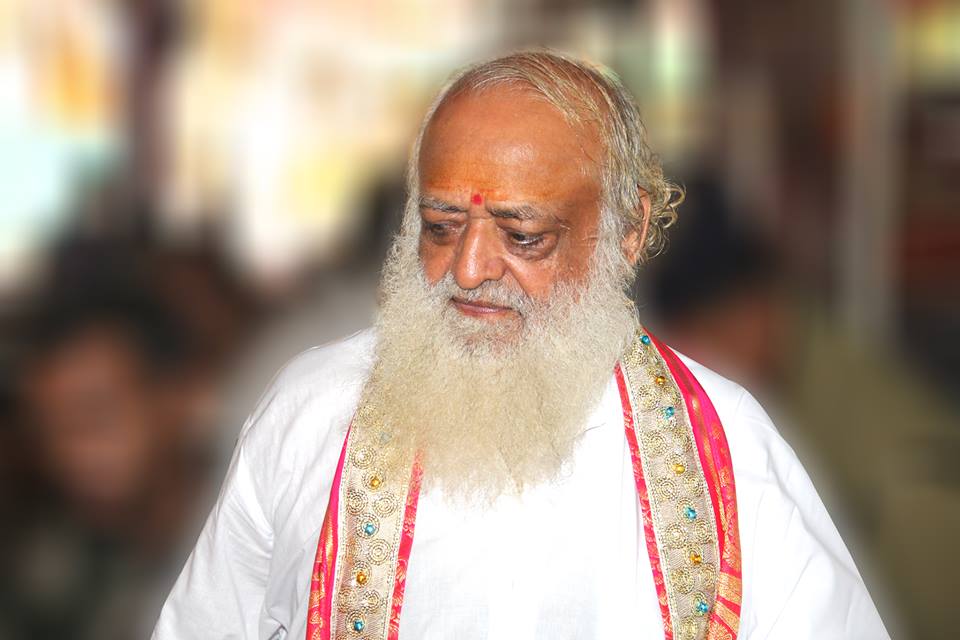 Madhusudan Sharma, a special judge at the Jodhpur Schedule Caste And Schedule Tribe Court, had earlier today convicted the self-styled godman and two of his associates – Shilpi and Sharad – in the 2013 case. According to ANI, the special court acquitted the other two accused in the 2013 case – Prakash and Shiva.

Asaram’s two associates have been given 20 years each in jail amid stringent security.

Asaram had been booked under Sections 342 (punishment for wrongful confinement), 376 (rape), 354A (assault or criminal force to woman with intent to outrage her modesty), 506 (punishment for criminal intimidation) and 509/34 (word, gesture or act intended to insult the modesty of a woman read with Section 36 – acts done by several persons in furtherance of common intention) of the IPC, as well as under relevant sections of the Protection of Children from Sexual Offences (POSCO) Act and Sections 23 and 26 of the Juvenile Justice Act.

The godman faces a minimum of ten years in jail and a maximum punishment of life imprisonment based on the charges against him.

Final arguments in the case were completed in the trial court on April 7, after which the court reserved the order for April 25.

Welcoming the decision, victim’s father told NDTV, “Asaram is convicted, we have got justice. I want to thank everyone who supported us in this fight. Now, I hope he will get strict punishment. I also hope the witnesses who were murdered or kidnapped get justice.”

Asaram, meanwhile, is set to appeal the verdict. “We will discuss with our legal team and then decide our future course of action. We have confidence in our judiciary,” Neelam Dubey, Asaram’s spokesperson, told ANI.

“We expect a life imprisonment for Asaram on the basis of Section 5 of the POSCO Act,” Utsav Bains, the lawyer of the victim’s family, told The Wire earlier.

In August 2013, the Delhi police filed a case against Asaram on the basis of a complaint by a 16-year-old girl, who alleged that the godman sexually assaulted her in his Jodhpur ashram under the pretext of performing an ‘exorcism.’

In her complaint, the minor girl, who hails from Shahjahanpur in Uttar Pradesh, said that when her parents took her to Asaram’s ashram in Manai, Jodhpur on August 14, 2013 – where he was residing at the time – they were asked to leave and the victim was left alone with Asaram in his hut. 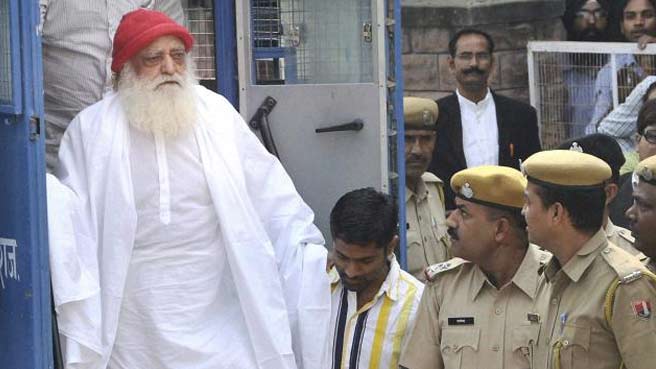 According to her complaint, she was asked to perform oral sex and was also touched inappropriately during what was supposed to be a ceremony to cure her from evil spirits. The incident occured on August 15, 2013.

On August 31, 2013, Asaram was arrested and flown to Jodhpur, where he was lodged in Jodhpur Central Jail. Investigators also alleged that Asaram videotaped his sexual acts with several women in order to blackmail them into granting him further sexual favours.

Asaram has remained in the Jodhpur jail since 2013. Till date, the self-styled godman has filed 12 bail applications – six before the trial court, three in the Rajasthan high court and three in the Supreme Court. However, all his bail applications have been rejected, despite being represented by prominent lawyers in the country – Subramanian Swamy, Ram Jethmalani, Salman Khurshid and Soli Sorabji.

During the trial, the prosecution examined 44 witnesses while the defence had given a list of 58 witnesses in the court.

Amid threat to law and order, the Centre had asked Rajasthan, Gujarat and Haryana governments to tighten security and deploy additional forces in areas where Asaram has a huge following. The police have also banned the assembly of more than four people under section 144 of the Code of Criminal Procedure, Indian Express reported.

Ahead of the verdict, a supporter of Asaram, who was trying to garland his poster on a wall of the corridor outside the jail boundary in Jodhpur, was detained, PTI reported.

The victim’s family had said that they were under extreme threat. “We had filed a petition in the Supreme Court demanding Central police security but the government didn’t agree. Despite SC orders, the victim’s security was reduced a number of times –indirectly attempting to break her resolve,” Bains, the lawyer for the victim’s family, told The Wire.

In September 2013, it came to light that the sessions judge Manoj Kumar Vyas, under whom this case was being heard, had received threats warning him of “consequences” if he did not grant bail to Asaram. The Jodhpur police also booked three of Asaram’s followers for issuing death threats to the SHO in-charge of security during the godman’s hearings.

In December 2014, the brother of the victim was threatened by Asaram’s followers that if he did not settle the on-going case, then the lives of the family would be placed at risk. An FIR was lodged against the two men who made the threats – Narayan Pandey (29) and Pradeep Mishra (30).

On March 16, 2014, two motorcycle-borne men threw acid on Dinesh Bhagchandani, Asaram’s erstwhile ‘go-to guy’ and now a prime prosecution witness. Kishore Bodke, one of the assailants who was overpowered by passersby, later told police that he was allegedly acting on the instructions of Basvaraj Basu, a devout follower of Asaram from Bijapur, Karnataka.

A handwritten-chit recovered from Bodke bore the names of six witnesses living in Gujarat. Shockingly, five of the six people on the ‘hit list’, including Bhagchandani, have already been targeted. Narsingh Watwani, the sixth name on Bodke’s list, lives in a constant state of fear.

Amrut Prajapati, who served as Asaram’s personal vaidya (Ayurveda physician) until 2005, was shot at in Rajkot on May 23, 2014, and succumbed to his injuries 17 days later. His wife Saroj, who publicly accused Asaram of having got her husband killed, mysteriously went missing.

Rakesh Patel, formerly working as a videographer for Asaram and a witness in the Jodhpur rape case, was also attacked by motorcycle-borne men.

Vimlesh Thakkar, the husband of a follower who also charged Narayan Sai, son of Asaram, of sexually assaulting her at his Jahangirpura ashram, was attacked with knives on February 28, 2014

Raju Chandak, a former ashram manager, escaped an assassination attempt in 2009, days after being deposed before the D.K. Trivedi Commission, which was probing allegations of tantric rituals inside the Motera ashram and the mysterious death of two boys there in 2008. Chandak is also a witness in the rape case against Asaram in Ahmedabad.

Asaram’s former cook Akhil Gupta, 36, who was an eyewitness in the rape case against Asaram in Ahmedabad and had returned home to Muzaffarnagar to set up a small dairy shop, was gunned down while returning home on January 11, 2015. Two unidentified young men on a motorcycle blocked the victim on the street and shot him at point-blank range. Gupta died on the spot, leaving behind his wife Varsha and two young children.

A month after Gupta’s killing in Muzaffarnagar, Rahul Sachan, 41, a witness in the Jodhpur rape case, was stabbed within the district court’s complex where he had been summoned for a hearing on February 13. While both Gupta’s and Chawla’s assailants escaped, Sachan’s attacker, Satya Narayan Gwala, was apprehended. Partly paralysed from the multiple stab wounds, Sachan, who has since returned home to Lucknow, is acutely depressed and suffers from unpredictable memory lapses. Despite the murderous assault, the Uttar Pradesh police have given him a solitary security guard for just eight hours a day, leaving him to fend for himself through the remaining 16 hours.

On May 13, 2015, an almost identical attempt was made to kill Mahender Chawla, 37, who worked as Narayan Sai’s personal assistant until July 2005 and is a prosecution witness in all the three cases against Asaram and his son. Chawla, who lives in Panipat’s Sanoli village, escaped death by a whisker. “They desperately want to silence me,” he says, momentarily trembling as he chillingly recounts how he was attacked outside his father’s home in Sanoli village.

In August 2015, Kirpal Singh, a key witness in the Jodhpur rape case, was shot at in Shahjahanpur, UP, and eventually died. In his dying declaration, he gave the police the names of three persons who were later identified as followers of Asaram. Kripal had also said that the three had approached him in the Jodhpur court and offered him a hefty sum if he were to withdraw from the case.