News on the Collegium's recent decisions has come to us not through the official SC website but through information leaks to specific journalists.

One daily newspaper called it the ‘biggest ever one-time rejig’. Another described it as “Mission Mode to fill vacancies”. Yet another newspaper, which first broke the story earlier, was content to term two of the transfer decisions as “most significant”.

It is noteworthy that some time ago, CJI N.V. Ramana had expressed deep distress over the leak of information about the recent selection of nine names for appointment as Supreme Court judges by the Collegium and subsequent media coverage of it even before the process was finalised and recommendations sent to the government.

Deviating from his speech during the farewell function of Justice Navin Sinha, who recently retired from the Supreme Court, the CJI had said:

“The process of appointment of judges is sacrosanct and has certain dignity attached to it. My media friends must understand and recognise the sanctity of this process. As an institution, we hold the freedom of media and rights of individuals in high esteem. Today’s reflections in some sections of the media, pending the process, even before formalising the resolution is counter-productive. There were instances of deserving career progression of bright talents getting marred because of such irresponsible reporting and speculation. This is very unfortunate and I am extremely upset about it.”

“I must also place on record the tremendous amount of maturity and responsibility displayed by the majority of the senior journalists and media houses in showing restraint and not speculating on such a serious matter,” the CJI was reported as having said on August 19.

Although the CJI did not name the newspaper and the reporter who had leaked the story on the Collegium’s recommendations on Supreme Court’s appointments before they were uploaded on the Supreme Court’s website, it was clear that he had in mind Apurva Vishwanath’s article that came out on the morning of August 18.

This time too, Vishwanath broke the story first when she reported on the outcome of the Supreme Court Collegium’s meeting on September 16. She followed it up with another story on the Tripura high court Chief Justice, Akil Kureshi being transferred as the CJ of Rajasthan HC on Friday.

Several newspapers reported the September 16 decisions of the Collegium on Saturday, September 18. The resolutions were, however, not uploaded on the Supreme Court’s website till Saturday evening.

The Supreme Court began the practice of uploading the Collegium resolutions on its website on October 3, 2017 when the then CJI, Dipak Misra, took the bold decision in order to assuage feelings of his colleagues who complained of a lack of transparency in the decision-making process.

As one commentator put it: “From October 2017, the resolutions provided brief but tantalising glimpses of the process by which nominees were recommended by the collegium. It allowed a little bit of transparency into a process that has been consistently criticised for its opacity and arbitrariness.”

In October 2019, this practice was abruptly stopped with the Supreme Court uploading bland “statements” of the Collegium decisions during the tenure of the then CJI, Ranjan Gogoi, who was incidentally, one of the four judges to hold the historic press conference against the then CJI, Dipak Misra, on January 12, 2018 in New Delhi. 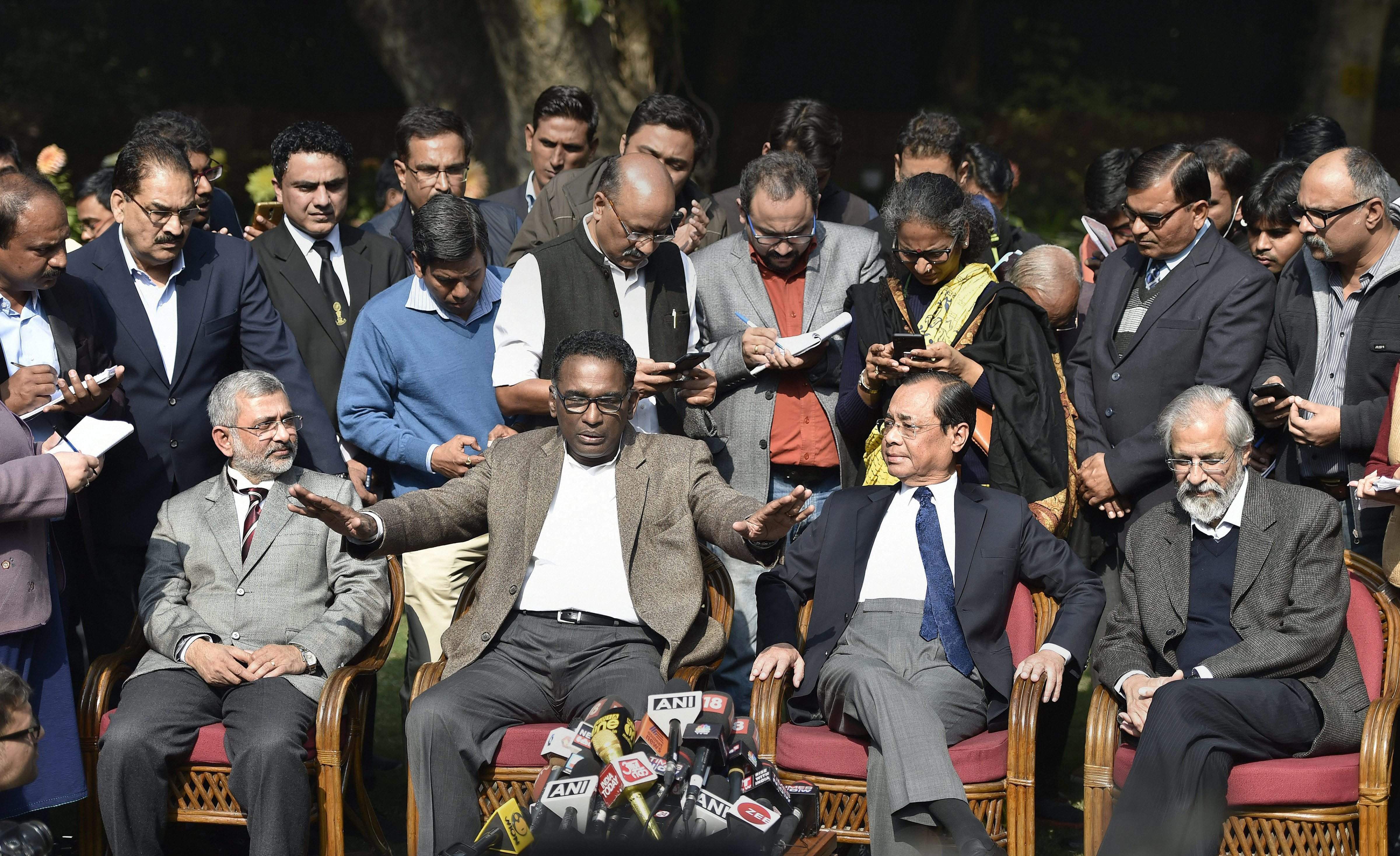 After the unprecedented press conference of four senior SC judges in January, there was definitely a need for course correction within the higher judiciary. Credit: PTI/Files

The collegium under the then CJI, Ranjan Gogoi, gave no reasons as to why it decided to supplant detailed resolutions with “statements”. One may call it institutional cowardice, or reluctance to subject its decisions to critical scrutiny, but history is likely to consider CJI Gogoi’s predecessor, Justice Dipak Misra – despite his omissions and commissions – as having tried a bold experiment with transparency, albeit short-lived.

On Thursday, September 16, the Supreme Court Collegium, in the eyes of many, once again took a historic decision to recommend the appointment of regular Chief Justices in eight high courts in a move aimed at making administration of constitutional courts “more efficient”. At present, eight of the 25 high courts are functioning with acting chief justices. They are Allahabad, Calcutta, Chhattisgarh, Gujarat, Himachal Pradesh, Karnataka, Sikkim and Telangana.

The Collegium also decided to transfer CJs of five high courts, and as many as 28 high court judges for “better administration of justice”.

While the Supreme Court Collegium must be admired for its cohesiveness, which facilitates its speedy decision-making,  questions are bound to be asked as to why it seeks to selectively and unofficially brief the media about its decisions, rather than follow the established  process of uploading its decisions on its website, howsoever inadequate it may be from the universal standards of transparency.

If the Supreme Court Collegium is of the view that the statements uploaded on the Supreme Court’s website are inadequate to bring out its admirable contribution to filling up of vacancies especially after the assumption of office as the CJI, by Justice N.V. Ramana, then the right course would be to return to the reform initiated by his predecessor, Justice Dipak Misra, and upload the detailed resolutions.

On the contrary, the CJI’s outburst against a scoop by an enterprising journalist on the Collegium’s decisions – which proved to be accurate subsequently – and his silence on the leak of its decisions to select journalists in time for the reports on Saturday, only sends mixed signals about his concern for transparency and sanctity of the appointment process.

It is not ideal that the news about the Collegium’s decision to recommend as many as eight regular CJs, and transfer of five high court chief justices, besides 28 high court judges, must go unreported in a section of the media merely because the Supreme Court has shied away from officially and publicly acknowledging it immediately on its website.