As Arunachal Pradesh Bans Mention of 'Beef' on Signboards, How Legal Is the Order?

Issued by an executive magistrate under Section 144, the order appears to run afoul of most of the safeguards placed by the Supreme Court in this regard.

'If anything, the executive magistrate's order is a blatant abuse of a law which restricts rights guaranteed under the Indian constitution.' Illustration: The Wire 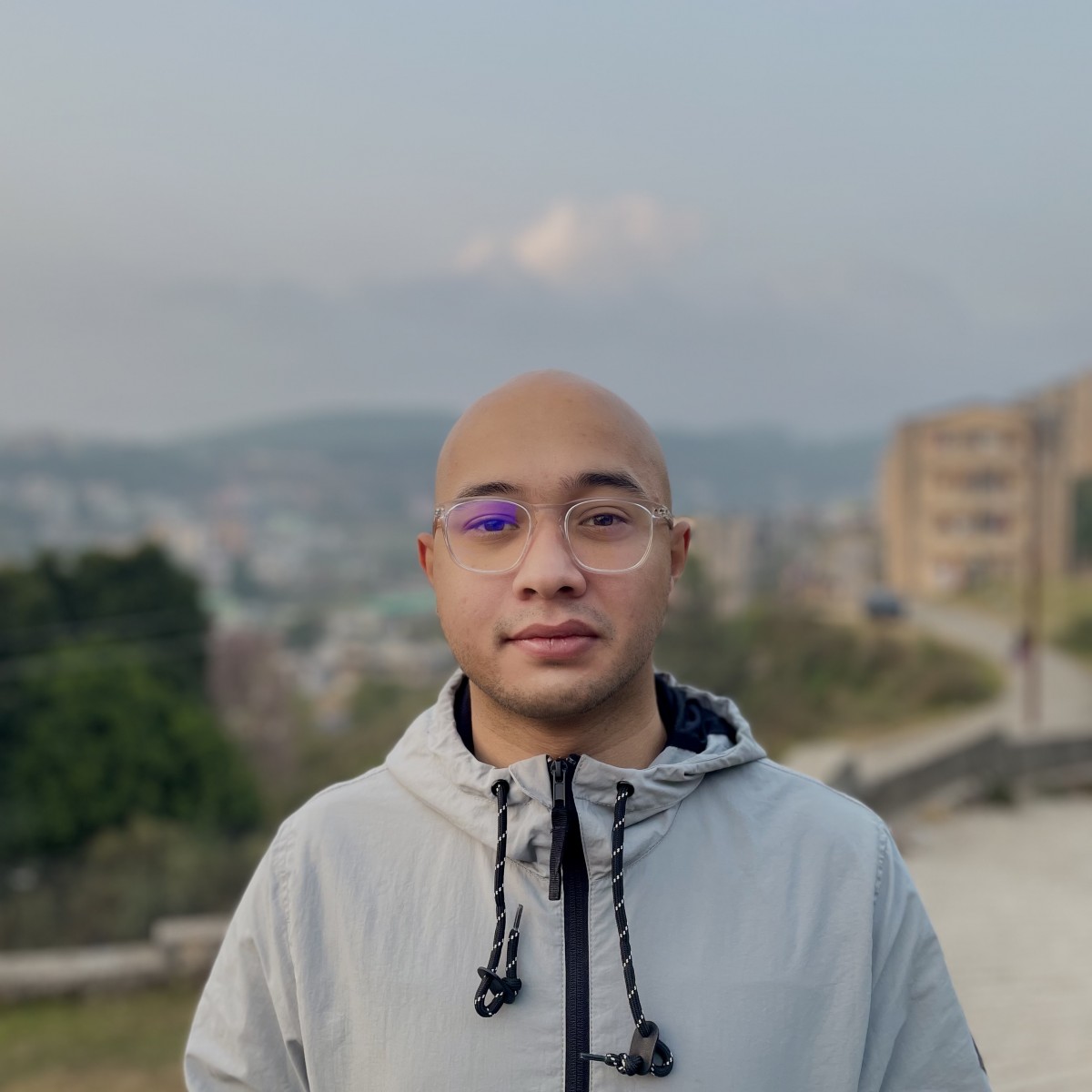 In July, an executive magistrate in Arunachal Pradesh issued an order under Section 144 of the Criminal Procedure Code, prohibiting hotels and restaurants from using the word “beef” on their signboards.

How legal is such an order?

The order noted that information on hotels and restaurants within the Naharlagun sub-division having put up signboards with the word “beef” written on them had been “brought to the notice of” the executive magistrate. 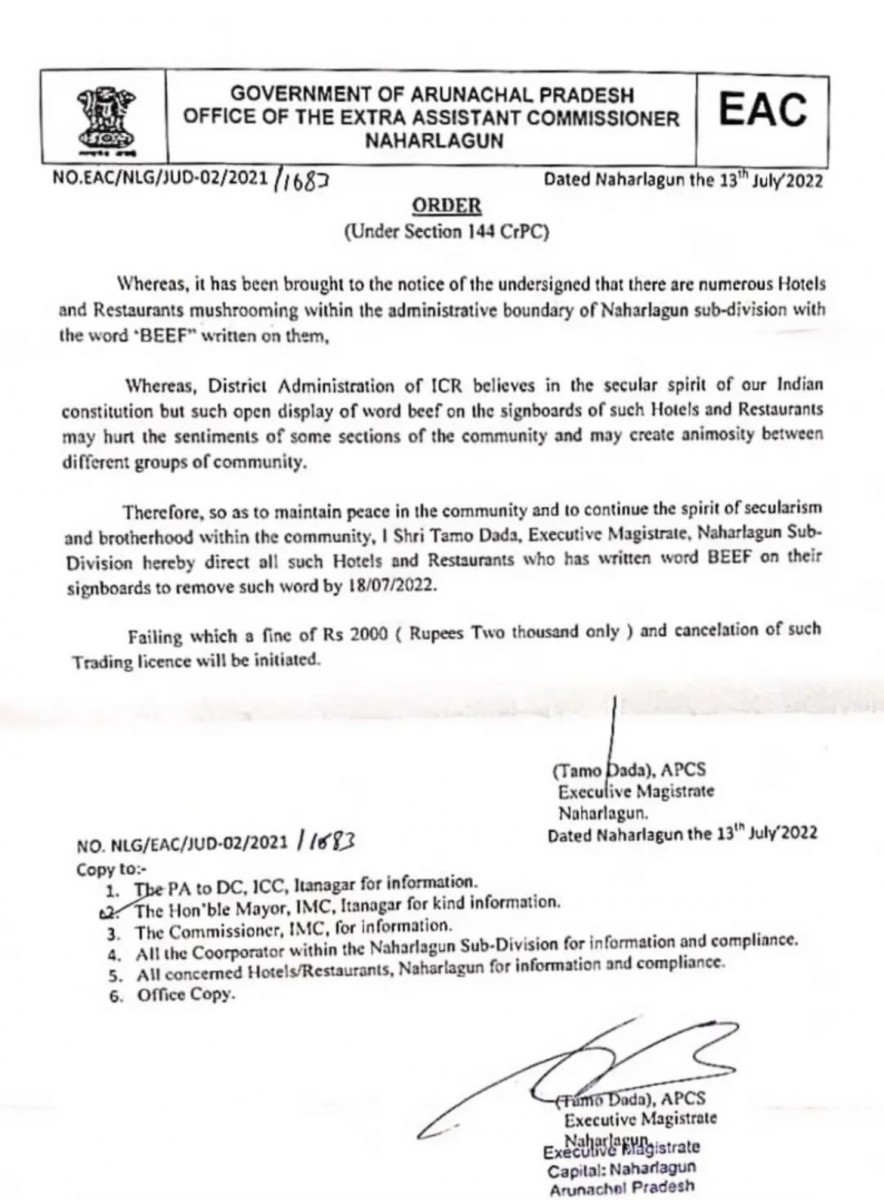 The order by an Arunachal Pradesh executive magistrate, banning the use of the word ‘beef’ on signboards.

It further noted that while the district administration “believes in the secular spirit of our Indian constitution”, the “open display of [the] word beef on the signboards…may hurt the sentiments of some sections of the community and may create animosity between different groups…”.

The order directed that “to maintain peace in the community and to continue the spirit of secularism…”, all hotels and restaurants should remove the word “beef” from their signboards within a deadline, failing which their trading licence would be cancelled along with the imposition of a fine of Rs 2,000.”

What orders can be issued under Section 144?

Orders such as the one we are discussing here are executive orders issued under Section 144 of the Code of Criminal Procedure, 1973. The CrPC’s purpose is to serve as a procedural guide for enforcing substantive criminal law provisions. Reading the CrPC, we can see Section 144 forms part of Chapter X, which deals with ‘maintaining public order and tranquillity.’

In keeping with its stated purpose of the chapter, Section 144 empowers magistrates to impose orders prohibiting any person from undertaking activities that the magistrate considers, among other things, as likely to disrupt public tranquillity or lead to unrest.

The Supreme Court had underlined the following key elements of a direction under Section 144 in its judgement in the Ramlila case.

First, the section confers executive power on the officer who is empowered to impose the order.

Second, there must be sufficient grounds before such executive power is exercised.

Third, there should be an immediate need to prevent harm.

And fourth, the executive power is exercised based on a written order which underlines the material facts that necessitated the exercise of the executive order.

Does the order under Section 144 satisfy the required legal threshold?

The order issued under Section 144 in Arunachal Pradesh leads us to arrive at the following conclusions:

Second, the executive magistrate who issued the order did so on the grounds that the display of a particular word may offend the sentiments of certain groups and cause animosity amongst them. Apart from this non-concrete statement, the officer makes no further particular observations in the order.

The first concern is the permanent and broad nature of restriction imposed on citizens. When orders are issued under Section 144, such types of restraints cannot be imposed. To understand this concern, we must first realise that the legislative intention behind Section 144 was to provide a legal instrument that would allow the government to quickly deal with cases of an emergent nature.

A cursory reading of the legislative provision reveals that orders issued under the section cannot be in effect for more than two months, with an exceptional ground allowing the state government to grant a six-month extension. This emphasises the fact that the orders made under this section are only temporary, and that the legislative provision was not meant to impose permanent restrictions.

Aside from the fact that the legal provision is only temporary, there are limitations on restrictions that an order under Section 144 can impose. In the Ramlila case, for example, the Supreme Court ruled that restraints imposed by an order made under the legislative provision have “to be reasonable and further must be minimal”, and that the restraint imposed by such order “should not be allowed to exceed the constraints of the particular situation either in nature or in duration”.

The Arunachal Pradesh order’s restriction is wide and permanent. This is evident since the order directs the complete and permanent removal of the term “beef” from signboards in the entire subdivision. Such restrictions impact rights guaranteed under the constitution of India, including the right to free speech and expression and the right to carry on any occupation, trade or business.

The second problem with the order in Arunachal Pradesh is that the executive magistrate failed to demonstrate grounds which would satisfy the application of provisions of Section 144.

The legal provisions state that its provisions must be enforced by a written order, and that such an order must provide confirmation of an independent evaluation of the relevant facts of the case at hand. This means that Section 144 can only be invoked to impose restrictions when sufficient grounds are satisfied. As a result, officers authorised to impose these orders have a clear obligation to examine whether the facts and circumstances of a given case are serious enough to warrant the use of Section 144’s provisions. 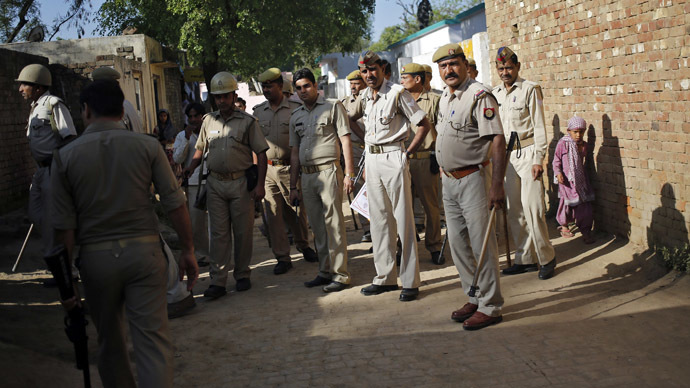 Representative image of police during the clampdown of Section 144. Photo: Reuters/File

The Supreme Court has elaborated further on this obligation imposed on officers, holding that “the perception of the officer recording the desired/contemplated satisfaction has to be reasonable, least invasive and bona fide”.

Aside from this, the Supreme Court has ruled that when authorised officers determine whether a threat to public peace and tranquility exists in a specific case, “the most onerous duty that is cast upon the empowered officer by the legislature is that the perception of threat to public peace and tranquillity should be real and not quandary, imaginary or a mere likely possibility”.

This, therefore, clearly implies that officers are bound to rely on real and legitimate grounds when deciding whether to use the legal provisions of Section 144.

However, when we look at the order issued in Arunachal Pradesh, we notice that the executive magistrate has relied on singular and non-concrete grounds to justify the restriction: that the use of the word “beef” on signboards may hurt the sentiments of the community and that it may create animosity between groups.

If anything, the executive magistrate’s order is a blatant abuse of a law which restricts rights guaranteed under the Indian constitution.

Such orders reflect an executive magistrate’s failure to fulfil his or her duty as required by the law, and it would be difficult to expect orders of this nature to survive a legal challenge in a court of law.

Jade Lyngdoh is a Constitutional Law honours candidate at National Law University, Jodhpur, where he is a Facebook India Tech Scholar (2021-22). Views expressed by the author are personal.