Mehbooba Mufti's meeting with political opponent Farooq Abdullah shows just how critical the issue of Article 35A has become. 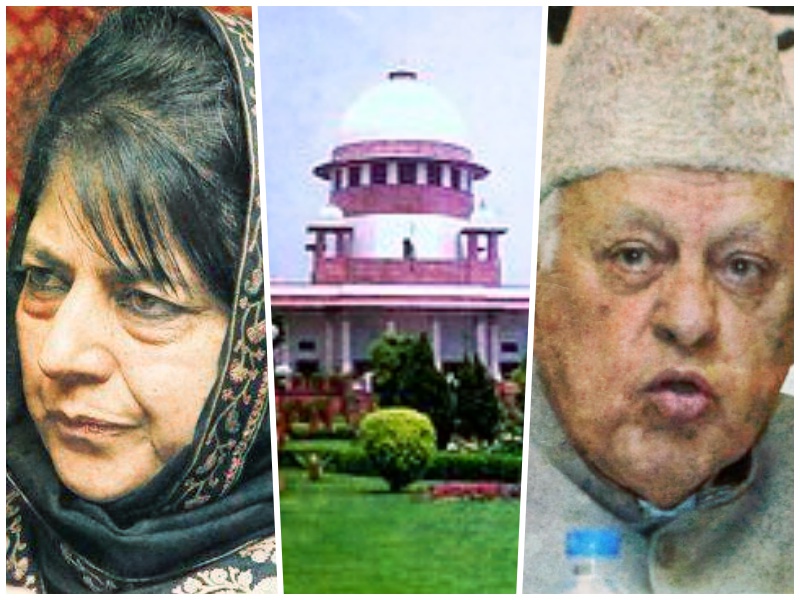 Srinagar: When Jammu and Kashmir chief minister Mehbooba Mufti drove to the residence of political opponent Farooq Abdullah to discuss “ways to safeguard” Article 35A on Monday, it underlined the concerns and fears about abrogation of the constitutional provision that grants exclusive state subject rights and other privileges to “permanent residents” of the state.

The Centre’s decision not to support the state government’s stand in the Supreme Court for dismissal of the petition, which has called for striking down Article 35A, has charged the political atmosphere in the state.

While much is at the stake for Mehbooba, whose Jammu and Kashmir Peoples Democratic Party (PDP), according to insiders, feels “let down” by the BJP on the issue, the immediate worry for the government, however, is that the debate over Article 35A could trigger the next “bigger uprising” in the Valley, which, according to Abdullah, would be difficult even for the Centre to contain.

Article 35A and J&K citizens’ rights

Article 35A empowers the J&K legislature to define permanent residents of the state. This provision was added to the constitution through the Constitution (Application to Jammu and Kashmir) Order, 1954, issued by the country’s first president, Rajendra Prasad, on May 14, 1954, in exercise of the powers conferred by clause (1) of Article 370.

The J&K constitution, which was adopted on November 17, 1956, defined a permanent resident as a person who was born or settled in the state before May 14, 1954, or who has been a resident of the state for ten years and has “lawfully acquired” immovable property in the state.

The state’s former advocate general M.I. Qadri said the state subject law dates back to 1927 when the Dogras from Jammu approached the then maharaja fearing that an influx of people from Punjab would lead to their domination in government services.

“These fears led to the issuance of a separate notification by the maharaja in 1927 and 1932 which defined the state subjects,” said Qadri, adding that once the state constitution was framed in 1956, it retained the maharaja’s definition of permanent residents and the privileges enjoyed by them exclusively in matters related to employment, acquisition of immovable property, settlements and scholarships.

The petition and the fears

However, in 2014, a little known non-governmental organisation, We the Citizens, filed a petition in the apex court seeking that Article 35A should be abrogated while arguing that the provision was “unconstitutional” and approved without any debate in the parliament.

Though the PDP government, in its defence of Article 35A, has reiterated that it has become a permanent feature of the constitution, Attorney General K.K. Venugopal told the bench headed by Chief Justice of India (CJI) J.S. Khehar that the Union government was not keen on filing an affidavit in the case.

Instead, he said the government wanted a “larger debate” on the issue that was a “very sensitive” matter following which the court referred the matter to a three-judge bench and set six weeks for final disposal.

But the Centre’s decision is seen by the opposition parties and the people of the state as a part of a “larger design to breach J&K’s special position” as Article 35A bars non-state subjects from settling and buying property in the state.

That members of the BJP’s state unit are now openly raising voices against the article hasn’t only put the PDP in an awkward position, it has also led credence to the claims that the legal war against the state’s special position was being waged in a systematic manner.

“Article 35A is a constitutional mistake,” claimed state BJP member of legislative council Surinder Amabardar while the party’s spokesperson in Jammu, Arun Gupta, termed it as an “unconstitutional provision of law,” which, according to him, has “done great harm by not allowing anybody from country to come and settle here”.

According to political analyst Noor Ahmad Baba, it has been the policy of the BJP and Sangh parivar to abrogate the state’s special position. “Today, the BJP is in power in New Delhi and that has made the issue graver,” said Noor Ahmad.

Mehbooba’s meeting with Abdullah, which lasted less than half an hour, came a day after the National Conference veteran warned the Centre against scrapping of Article 35A, saying that the move could trigger an explosive situation in the state which would be of “far greater magnitude” than the 2008 Amarnath land row.

In 2008, the decision to transfer the forest land to the Amarnath Shrine Board led to mass protests and killing of over 60 civilians and ultimately, the fall of the Congress-led government in the state.

“This is about the rights and survival of the people. That is why we need to be united to oppose the nefarious designs of the forces which are against the special position of Jammu and Kashmir,” Abdullah told reporters soon after the meeting which was attended by top leaders from the Congress and other opposition parties.

The state CPI(M) leader M.Y. Taragami, who participated in the meeting, said they decided to form a united front that would reach out to people in all the three regions of the state – Jammu, Kashmir and Ladakh – to educate them about importance of Article 35A and the fallouts of its scrapping.

“This is a question of our existence. If the enemy succeeds in its plans, we will be annihilated,” Taragami told the Wire. 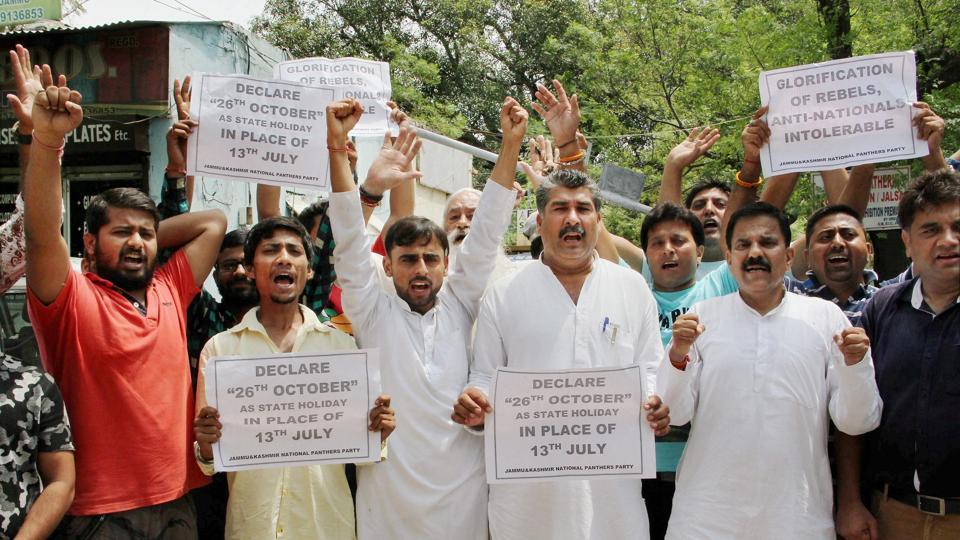 Not only a Kashmir-centric issue

Former chief minister Omar Abdullah has added voice to the debate over Article 35A, saying that questioning its validity would be as good as challenging the accession of the state.

According to noted lawyer Zaffar Shah, the scrapping of Article 35A will result in the loss of special privileges including state subject law, right to property, right to employment and right to settlement enjoyed by the citizens of the state. These privileges, he said, will become available to citizens from across the country and J&K will become like any other state where people from any state will have all these rights.

But more importantly, Shah explained, if Article 35A is scrapped, it would raise the question about the legality of all constitutional orders from 1950 onwards.

The opposition has also questioned the PDP over the contradictory stands of its ally, the BJP, on the issue.

“When the Centre takes a completely different stand on the matter (Article 35A) which is so dear to the people of J&K, it shows how weak and helpless the state government has become and how it has failed to put across its point of view to secure the interests of the state,” National Conference spokesperson Imran Nabi told The Wire.

According to him, the chief minister’s talks about protecting Article 35A during public meetings or functions in Kashmir or elsewhere “make no sense” unless she convinces the Modi government to support their stand on the issue.

He was referring to Mehbooba’s stern warning to the Centre last month that if there was any tinkering with Article 35A, there would not be nobody left to hoist the tri-colour in Kashmir.

Since Article 35A is a provision in the constitution of India and not J&K’s constitution, there is an opinion that it is the Centre’s stand that will prove decisive in the state government’s battle for its protection.

“There is also a need to clear this wrong notion that Article 35A is a Kashmir centric issue. Its scrapping would lead to more damages for Jammu and Ladakh than Kashmir,” said Nabi.

What are the options?

This is not for the first time that Article 35A has been challenged in the Supreme Court. Similar petitions have been dismissed by the Court thrice in 1956, 1961 and 1970.

“The government needs to put its best defence in the Supreme Court and take all political parties along in this fight for protecting the rights and privileges of the people of the state,” said state Congress chief G.A. Mir, assuring that his party would extend full support to the government on the issue.

On its part, the state government said it was “contesting and defending” Article 35A with “full rigour and defence.”

“The government is competent enough to contest the case seriously and legally,” said state law minister Abdul Haq Khan, adding that the chief minister was personally monitoring the developments in the case.

But more than being a legal one, the battle for Article 35A is political in nature. And that is where, according to Noor Ahmad, the state’s political parties and the people need to unite to fight the battle.

“Otherwise, we are at the verge of losing our existence as well as our identity,” he cautioned.