Had the court chosen to interpret the Act, it could have ruled on the distinction between the illegitimacy of applying the party whip to an expelled legislator and incurring disqualification when the same legislator joins another party. 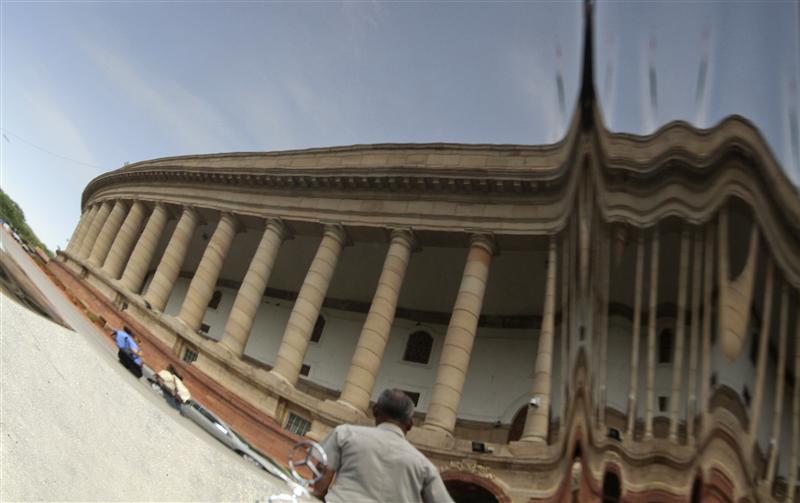 A view of the Indian parliament building is reflected on a car. Credit: Reuters/B. Mathur

The Supreme Court’s three-judge bench, comprising Justices Ranjan Gogoi, Arun Mishra and Prafulla C. Pant, decided on August 3 not to interpret the Anti-Defection Act to determine the status of MPs and MLAs expelled by the parties on whose nomination they were elected to parliament or state assemblies. The court refrained from doing so on the ground that the petitions referred to the bench have become infructuous, with the petitioners – Amar Singh, Jaya Pradha and Pyarimohan Mohapatra – completing their terms in parliament during the pendency of their petitions.

While Singh and Pradha were expelled by the Samajwadi Party, Mohapatra suffered a similar fate at the hands of the Biju Janata Dal leadership.

Ironically, on August 2, another bench of the Supreme Court decided a public interest matter, even though the facts of the case suggested it had become infructuous.

In Educational Consultants India Ltd SC/ST Employees Welfare Association v Union of India, the bench, comprising Chief Justice T.S. Thakur, and Justices R. Banumathi and Uday Umesh Lalit, dismissed the challenge to the extension of tenure to a civil servant without clearance from the central vigilance commissioner, although the officer in question had completed her extended term eight months ago.

Whether a matter has become infructuous depends on the facts of the case, which were obvious to both the bench and the counsel during the hearing of this case. Still, the bench went ahead and heard the counsel at length, probably to lay down certain principles, while answering the questions referred to it by a two-judge bench in 2010.

Such principles would have been relevant to pre-empt litigation in the future, and also to guide presiding officers in parliament and state assemblies who function as quasi-judicial officers under the tenth schedule to the constitution.

Therefore, the bench’s decision to refrain from answering those questions because the matter has become infructuous took the counsel by surprise and also left them disappointed that their well-researched arguments to persuade the bench to decide the issue either way were in vain.

“Questions referred are kept open for decision in an appropriate case”, the bench has observed in its order.

Indeed, the very basis of Singh’s writ petition in the Supreme Court became vulnerable during its pendency when in 2011, he and Pradha floated a new political party, the Rashtriya Lok Manch, which contested the 2012 assembly elections in UP unsuccessfully. By launching this party, Singh could have suffered disqualification under the tenth schedule because his action amounted to voluntarily quitting the party and thereby attracting disqualification as a member.

With the Samajwadi Party taking Singh back into its fold in 2016 by nominating him for another term in the Rajya Sabha, the clock has turned full circle; but the issues he raised in his petition will continue to resonate in our representative bodies, until the Supreme Court gets another opportunity to resolve them.

In that case, the Supreme Court held that an elected member would continue to belong to the political party that set him or her up as a candidate for the election as such member. This is notwithstanding the fact that he or she had been expelled from that party.

The court justified this view because of the deeming fiction contained in explanation (a) to paragraph 2(b) of the tenth schedule.

Paragraph 2(b) says that if a member votes or abstains from voting in the House, contrary to any direction issued by the party to which he belongs, then he would be disqualified from being a member of the House.

An explanation, carried in the schedule, to this sub-paragraph says that an elected member of the House shall be deemed to belong to the political party, if any, by which he was set up as a candidate for election as such member.

It is fairly well settled that a deeming provision is an admission of the non-existence of the fact deemed. The legislature is competent to enact a deeming provision for the purpose of assuming the existence of a fact that does not even exist. It means that the courts must assume that such a state of affairs exists as real, and should imagine as real the consequences and incidents that inevitably flow therefrom, and give effect to the same.

Reading these together, the Supreme Court held in G. Viswanathan that this deeming fiction has to be given full effect otherwise the expelled member would escape the rigour of the law, which was intended to curb the evil of defections. The expulsion of a member from the political party will have no bearing on this deeming fiction, the court had held in G.Viswanathan.

If legislative intent holds the key to the interpretation, however, those members who are expelled from their political parties should not come within the ambit of the tenth schedule. This is evident from the parliamentary debates that followed the tabling of the Anti-Defection Bill in 1985, which ultimately resulted in the introduction of the tenth schedule.

In the Constitution (52nd Amendment) Bill 1985, besides clauses (a) and (b) to paragraph 2(1) of the tenth schedule, clause (c) had also been included. The entire paragraph 2(1) deals with grounds on which disqualification of a member because of defection occurs.

The above clause was the subject matter of heated debate when the Bill was tabled in parliament and moved by then law minister Ashok Sen. The then government agreed to omit this clause in the Act, in deference to the wishes of the members who participated in the debate.

Sharad Dighe, a former speaker of the Maharashtra legislative assembly and a Congress member of the Lok Sabha at that time, participated in the debate and expressed his concerns thus:

“It was very much necessary to delete paragraph (c) because if a Member has to be expelled from a political party in accordance with the procedure for anything done outside the House, it would have created several practical problems and it would have given a handle especially to the bosses of similar parties.”

Finally, only two grounds were retained: (a) when a member voluntarily gives up his membership of such political party, and (b) when he votes or abstains from voting in such House contrary to any direction issued by the political party to which he belongs.

In G.Viswanathan, however, the court brought in clause (c) through the back door, purportedly, in order to give effect to the deeming fiction in the explanation to paragraph 2(1)(b). The court had completely overlooked the parliamentary debate on the subject.

Since the legislative intent in enacting the Anti-Defection Act was not to make members expelled from their parties to suffer disqualification on the ground of defection, treating them as members of the same political party that had expelled them would leave them completely vulnerable to the whims and fancies of the leaders of their parties.

Knowing fully well that expulsion of a member from the political party by itself would not result in disqualification of that member, party bosses would apply the party whip to challenge such members to violate it and suffer disqualification as a consequence.

The status of the ‘unattached member’ is  an innovation, with the aim to protect the members expelled from their parties from the rigours of Anti-Defection Act. Since the G. Viswanathan ruling will come in the way of presiding officers giving effect to the legislative intention, it is important that the Supreme Court resolves this issue sooner or later.

It makes no sense to suggest that political parties, even after expelling its members from their parties can subject such members to its directions within the House, just to inflict the further punishment of disqualification on them. Such members are likely to violate the party’s directions if they think they are justified in doing so because of their expulsion and their missing an opportunity to express their dissent within the party forums as a result.

Therefore, subjecting such members to the additional punishment of disqualification from the membership of the House would be disproportionate to the nature of their so-called offence in the first place. Such members are bold enough to express dissent and invite expulsion from their parties. The legislative intent is not to punish them twice for that behaviour, if they already suffered humiliation by way of expulsion from their parties.

If the legislative intent in enacting the Anti-Defection Act has any message for the party bosses, it would be against expelling the members from their parties for mere dissent and later applying the party’s directions within the House to them, which would expose their inconsistency.

However, if such expelled members opt to join other parties, or float their own parties, they may be said to have suffered disqualification under paragraph 2(1)(a) of the tenth schedule for voluntarily leaving the parties, which fielded them as candidates at the time of elections. The legislative intent will not come to their rescue at this point.

During the hearing of Singh, Pradha and Mohapatra’s case, Additional Solicitor General P.S. Narasimha told the bench that while there is no automatic disqualification of a member expelled by his party, the member would attract the provisions of the tenth schedule if he or she joins any other political party voluntarily or defies any whip of the party that fielded him as a candidate at the elections.

This is because, as Narasimha argued, the tenth schedule contemplated an “overarching principle” that “a legislator who is born into a House through a political party or as a nominated member or even as an independent candidate shall retain his birth mark and shall continue as such till the dissolution of the House.”

Narasimha submitted before the bench that legislators expelled from a party do not operate in the House as “nomads” joining an existing political party at will without attracting the tenth  schedule.

It is this nuanced, valid distinction between the illegitimacy of applying the party whip to an expelled legislator and incurring disqualification when the same legislator joins another party, leaving his unattached status, that required the Supreme Court’s authoritative ruling.

The Supreme Court’s reluctance to deal with the issue, mainly because the case was pending for the past six years, making it an academic exercise for the petitioners, does not make it any less significant.