"With adequate cooperation from all stakeholders, ADR can emerge as a tool of social justice in India," he said at a national conference on mediation and information technology in Gujarat. 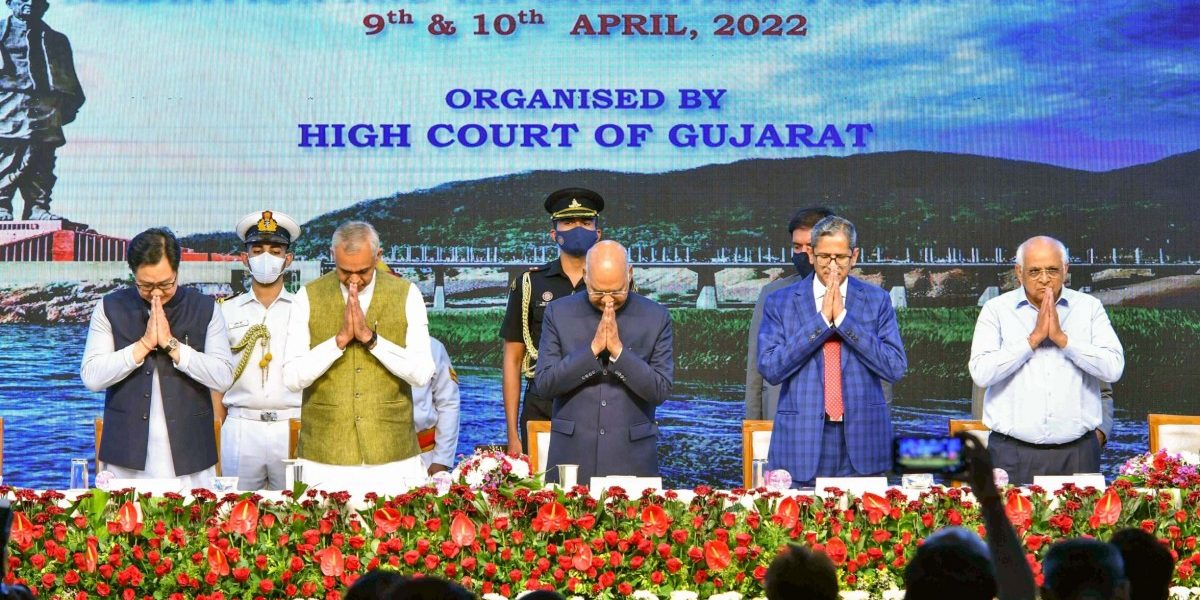 President of India Ram Nath Kovind inaugurated a two-day National Judicial Conference on Mediation and Information Technology, being organised by the High Court of Gujarat, at Ekta Nagar in Narmada district.hief Justice of India N.V. Ramana,Union Minister Kiren Rijiju and others are also seen. Photo: PTI.

Kevadia (Gujarat): The concept of alternative dispute resolution (ADR) has the potential to transform the Indian legal landscape by providing a platform for millions of people to settle their grievances, Chief Justice of India N.V. Ramana said here on Saturday.

“With adequate cooperation from all stakeholders, ADR can emerge as a tool of social justice in India,” he said.

Speaking at the inaugural event of a two-day national conference on mediation and information technology organised near the Statue of Unity here, the CJI asked courts to take an active effort to make negotiation and mediation mandatory as part of case management.

He also said those engaged in the justice delivery mechanism need to have a thorough understanding of new technologies, which have the potential to simplify the process.

“The concept of ADR, through Lok Adalats, Gram Nyayalayas, mediation and arbitration centres, has the potential to transform the legal landscape of India by providing millions of people a platform to settle their grievances,” the CJI said.

It can reduce pendency, save judicial resources and time, and allow litigants “a degree of control over the dispute resolution process and its outcome”, he said, adding that it is “one of the most empowering methods of resolving disputes as they maximise the participation of stakeholders”.

Justice Ramana also said that while conflicts are inevitable aspects of our lives, they can be resolved through understanding.

“Conflicts have a human face. One must have the foresight to look beyond the conflict. A dispute should not spoil your relationship. Prolonged litigation can drain resources and cause animosity, and conflicts can be resolved in a neutral environment, where both parties are in a win-win situation. After all, life is a balancing act,” the CJI said.

Justice Ramana asked the courts to take an active effort to make negotiation and mediation mandatory as a part of case management and said lawyers must try their best for pre-litigation settlement and advise clients to approach Lok Adalats for the greater benefit of parties.

He asked the parties to not use dispute resolution forums as a mere delaying tactic.

Further, judicial officers must understand the parties and their economic conditions without bringing any adjudicatory flavour to the proceedings, he said.

The Chief Justice of India also underlined the need for skilled mediators to decide on issues like whether the settlement being reached is patently unjust to the weaker party, and whether he should be a silent spectator during such negotiations.

“The ideals of substantive equality must be reflected in the resolution process as well…With adequate cooperation from all stakeholders, it has the ability to emerge as a tool of social justice in India,” Justice Ramana said.

The CJI said several states were working to build a robust ADR-friendly environment, adding that new-age lawyers and law students should be equipped with the developing expertise in negotiation and mediation.

“The skills involved are not only useful in the world of alternate dispute resolution but are also vital for managing personal and professional relations in day-to-day life,” he added.

Talking about technology, Justice Ramana said all those engaged in the justice dispensation mechanism including judges, lawyers, law enforcement agencies, and others, need to have a thorough understanding of new technologies.

Rapid development in the fields of cryptocurrency, data protection, encryption and artificial intelligence have caused courts and law enforcement agencies to engage with novel issues, and technology can be beneficially employed by the judicial system, he said.

“Our profession is at the brink of a technological revolution. The pandemic has helped to speed up this process. Technology has the potential to simplify the process, and Indian courts have started utilising it, with the e-Committees taking up initiatives like developing E -filing, Computer Assisted Transcription, Document Display System and the integration of courts under one IT Infrastructure,” the CJI said

Justice Ramana also spoke on ‘FASTER’, a digital platform recently launched by the Supreme Court for fast and secured delivery of urgent court orders in encrypted electronic format to the stakeholders, as well as live streaming of court proceedings.

“To make the idea of access to justice effective and user-centric, the need of the hour is the popularisation of mediation across various platforms,” he said.

The CJI said online mediation can revolutionise the justice delivery system by promising simple and affordable justice for all.