AGP Slams BJP in Assembly for Attempting to 'Nullify' Assam Accord

The state government said implementation of the accord is a priority and chief minister Sarbananda Sonowal is holding regular discussions with the Centre on the issue. 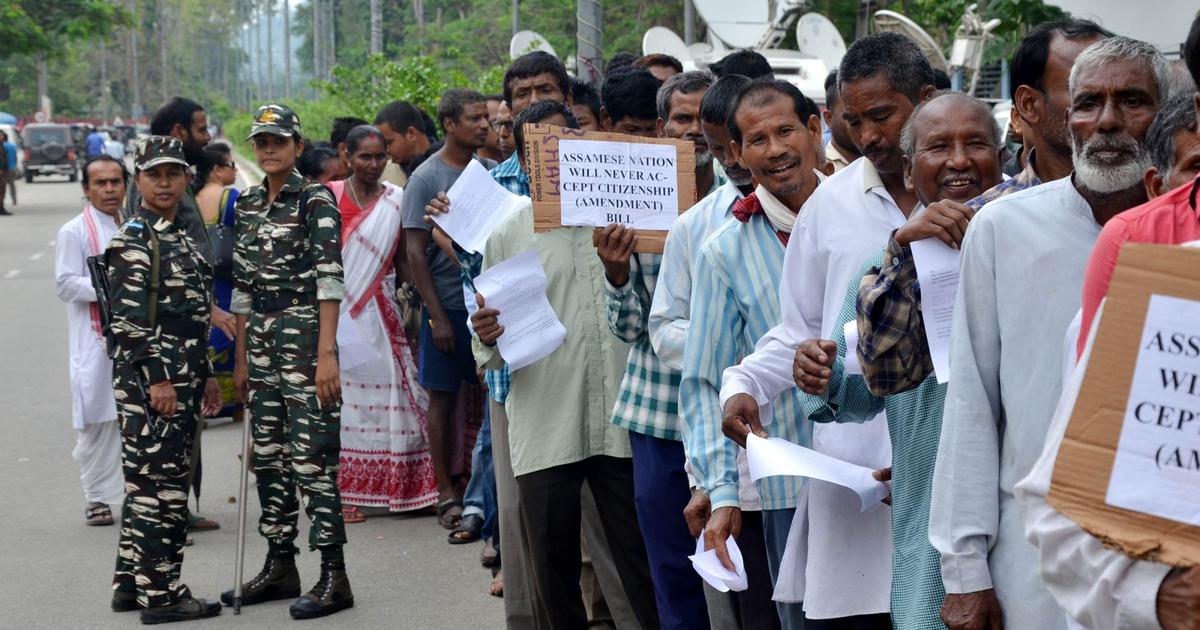 A protest in Assam against the Citizenship Bill. Credit: Special Arrangement

New Delhi: AGP, a former ally of the ruling BJP in Assam, on Monday slammed the state government for its alleged attempt to nullify the 1985 Assam Accord and staged a walkout in the state assembly.

The state government, however, said implementation of the accord is a priority and chief minister Sarbananda Sonowal is holding regular discussions with the Centre on the issue.

During the question hour, AGP MLA Ramendra Narayan Kalita charged the Centre with trying to nullify the accord by bringing in the controversial Citizenship (Amendment) Bill.

Responding to Kalita, parliamentary affairs minister Chandra Mohan Patowary said there is no question of nullifying it and the Centre has recently formed a high-powered committee to implement the clause 6 of the accord.

Clause 6 of the Assam Accord envisaged that appropriate constitutional, legislative and administrative safeguards, shall be provided to protect, preserve and promote the cultural, social, linguistic identity and heritage of the Assamese people.

The previous Congress governments in the state took initiatives to define indigenous people, but could not do that due to lack of consensus, he said and assured that the present dispensation will take a decision on it.

“Lok Sabha polls are there after two months. Why was the committee not formed two years ago instead of now? Then we would have welcomed the intention of the Centre.”

Also Read: Is Assam Mirroring the ‘Idea of India’ on the Citizenship Amendment Bill?

AIUDF member Mamun Imdadul Haque Chawdhury said that while the Assam Accord spoke about Assamese people, the present government is using the term indigenous people.

“From where has this come? Even the governor’s speech talked about indigenous people. How come has this happened? A wrong signal should not go from here,” he added.

Congress’s Rakibul Hussain said the clause 6 talks about land and political rights for people till March 24, 1971, while the Citizenship Bill is self-contradictory in this case.

“Will those coming under the Citizenship Bill not get land or political rights because you are talking about safeguards as per clause 6,” the former Congress minister questioned the government.

Patowary informed the house that foreigners who were identified earlier were pushed back at the Indo-Bangladesh border, but now they are handed over to border guards Bangladesh in absence of any formal repatriation pact.

When Kalita wanted to ask since when this process with BGB started, speaker Hitendra Nath Goswami did not allow him, saying only one supplementary question is allowed.

This lead to noisy protests from AGP members.

“We wanted a few answers from the government. As we did not get them, we are walking out in protest as the issue is a very serious,” the AGP member said and led his party MLAs out of the house.

Patowary said the Centre has for the first time taken a concrete step for constitutional, legislative and administrative safeguards to Assamese people as per the Assam Accord.

“From 1951 to 1971, Assam took the burden of foreigners. The Citizenship Act was amended in 1987, 2003 and the 1971 deadline was already compromised. We have devised a model and gave it to the Centre, which formed the committee,” he added.

BJP’s Binanda Kumar Saikia, who had raised the issue, inquired about the future of the Centre’s committee on Assam Accord as most of its members had refused to be a part of it in protest against the Citizenship (Amendment) Bill.

Patowary said he is unaware of the reasons for its members resigning and emphasised that the Centre will take steps for implementation of the clause 6.

“The accord will give land rights to indigenous people. It will be rare and exclusive to Assam. Protests are going on for Jati-Mati-Bheti (community, land, homeland). Mati and Bheti will be there and if Bheti is there, then Jati will survive,” he added.

The Citizenship Bill provides help for according Indian citizenship to Hindus, Jains, Christians, Sikhs, Buddhists and Parsis from Bangladesh, Pakistan and Afghanistan after seven years of residence in India instead of 12 years, which is the norm currently, even if they do not possess any document.