Protestors day recent government policies benefit the corporate sector to the detriment of workers and farmers. 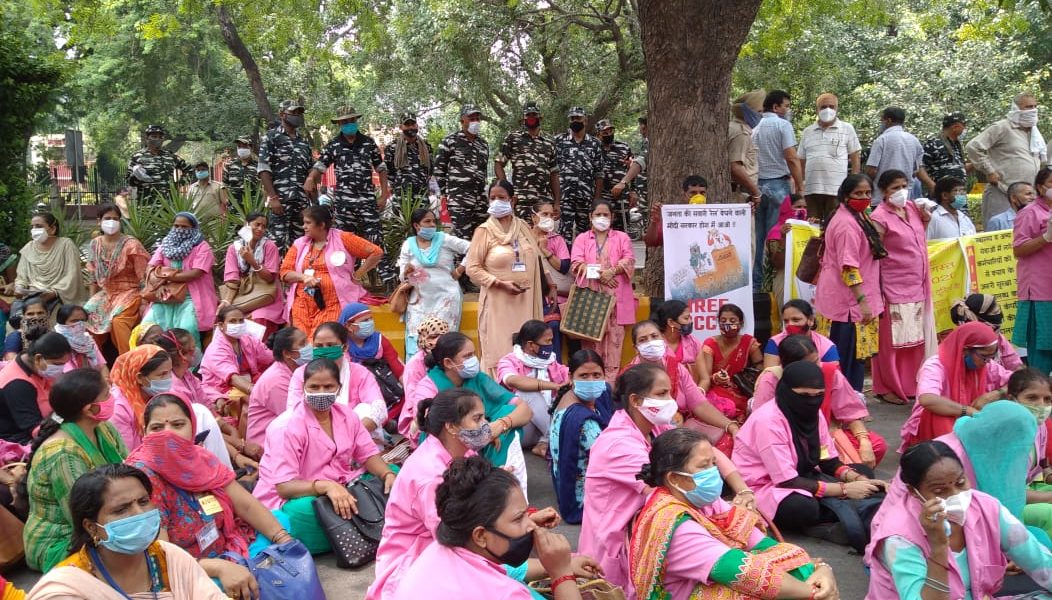 Their ire was directed at three recently introduced ordinances in the agriculture sector, the decision by some states to suspend or dilute labour laws, working conditions and low remuneration for sanitation workers and Accredited Social Health Activists (ASHA) workers, high unemployment rates and proposed privatisation of public services.

The protest was coordinated by Left-affiliates All India Kisan Sabha (AIKS) and Centre of Indian Trade Unions (CITU) and a motley group of around 200 organisations that are a part of the All India Kisan Sangharsh Coordination Committee (AIKSCC) which was formed after the Mandsaur farmers’ agitation of 2017. The organisations termed the protest ‘Save India Day’, ostensibly to strive to ‘save India’ from the Centre’s policies which they described as ‘anti-farmer’ and ‘anti-worker’. 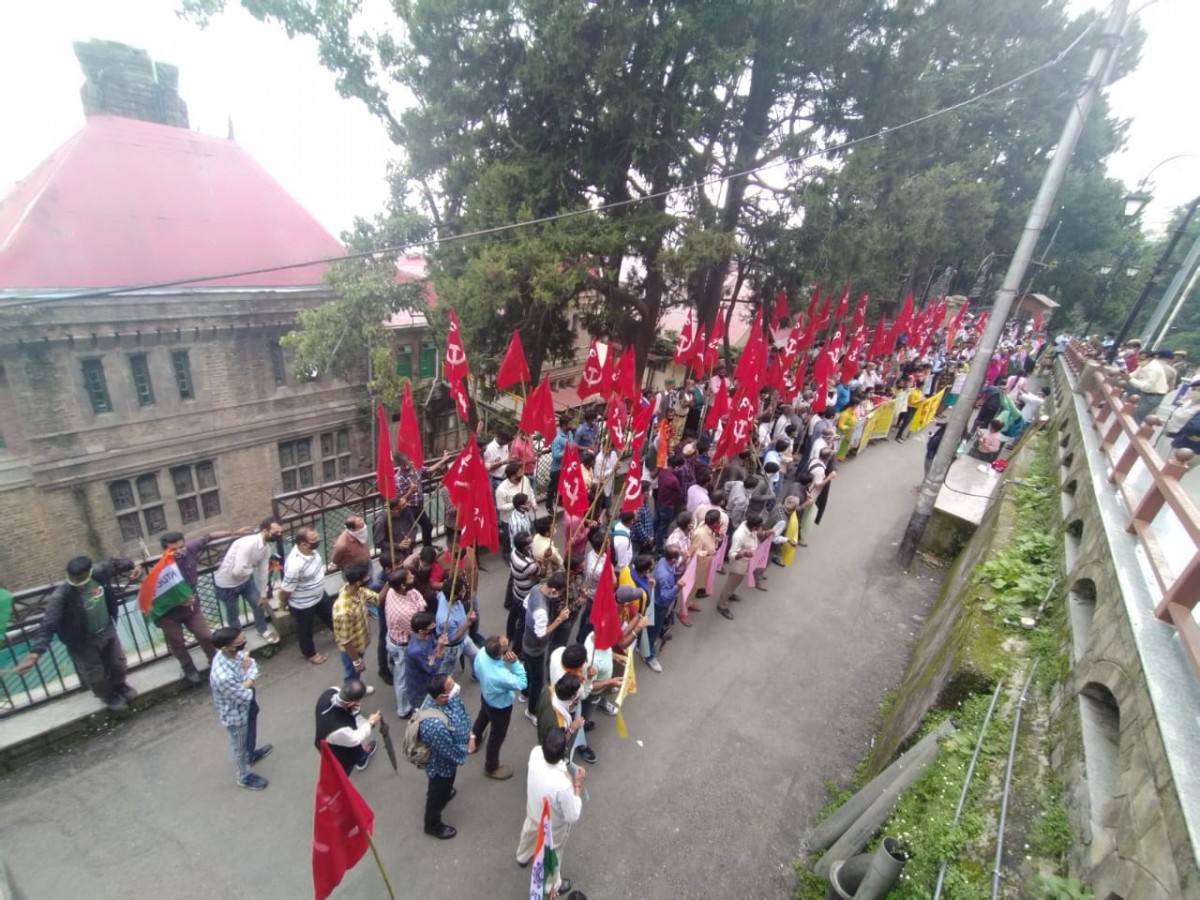 “Denial of employment and wage reduction have to be unitedly combated. The MSMEs themselves are reporting that 30% to 35% units may not be in a position to start their activities. The unemployment rate is high and job losses continue. Malnutrition will increase, hunger deaths will become a daily reality, and there is real threat of depression resulting in suicides amongst workers, say eminent scientists and medical experts. All these issues are enraging workers,” the organisations said in a statement.

The protests included motorbike and cycle rallies, processions and tractor mobilisations in different parts of the country. Kuldeep Singh, a farmer who owns four acres of land, had joined the protest in Hisar, Haryana and said that the government ought to ensure that farmers’ produce is procured.

“The government is not purchasing our produce and instead is bringing in these new laws (ordinances) which are anti-farmer. They will only benefit big companies who are friends with the government. We are demanding that the government abandon the new laws and increase procurement at minimum support prices (MSP),” he said.

Farmers’ organisations have argued that the government’s move to allow contract farming will mean that large corporations can enter the sector which, they argue, will be a disadvantage for farmers.

“We have seen this happen in Himachal as the Adani group has entered the apple sector. Growers have to go to them and take whatever price they are offering. It is a major problem and growers are made helpless. This will happen more and more if contract farming comes in,” said Sanjay Chauhan, former mayor of Shimla and finance secretary of the Himachal Kisan Saba.

The organisations have also argued that the government’s move to allow trade of agriculture produce outside the boundaries of the agricultural produce market committees (APMCs) will pave the way for the dismantling of the minimum support price (MSP) regime. This, they say, will not be acceptable to farmers.

They have demanded that instead the government should ensure that the MSP is set at cost plus 50%, as recommended by the Swaminathan Commission on farmers, and that MSP be made a legal right for farmers.

The organisations have also demanded that diesel prices be slashed. “Diesel costs have increased by more than 50% in two years and MSP has not even increased 5%. Other costs which farmers have to incur have also gone up. But our incomes have not increased,” said Singh.

The outfits that organised the protest also said that the suspension of labour laws for a period of time by some states such as Gujarat and Uttar Pradesh must be revoked. The changes, according to the organisations, will lead to exploitation of workers and are against the conventions of the International Labour Organisation (ILO).

The trade unions reiterated their stance against the proposed privatisation of public sector enterprises (PSUs) and the opening up of foreign investment in core sectors. “The Government continues with its arrogant attitude of going ahead with privatisation and sale of PSUs, and dangerously liberalising foreign entry in vital sectors of the economy like defence production from 49 to 74 per cent along with corporatisation of 41 ordnance factories for privatisation; it is also going ahead with its project of privatising Indian Railways in phases, the latest being its destructive decision of privatising 151 train services in highly remunerative routes to facilitate private players to make huge profit using infrastructure and manpower of Indian Railways,” they said. 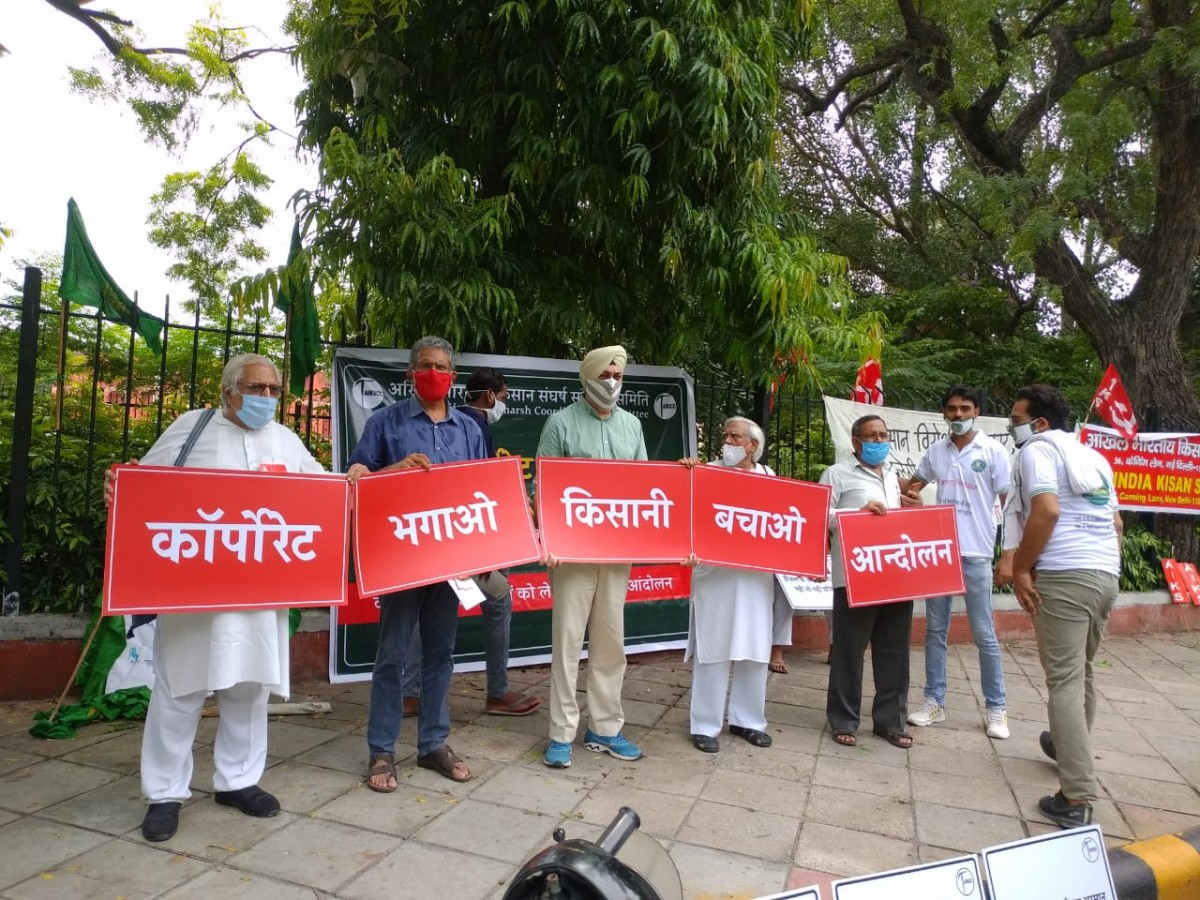 ASHA workers, who have been protesting for the last several days, also joined the protests on Sunday. Their key demands include better pay, formalisation of employment status and better availability of protective gear in their role as frontline workers in the COVID-19 crisis.

“The ASHA workers are at the forefront of the battle against coronavirus. They are working round the clock everyday and risking their lives and the lives of their families,” said Shweta Raj of the Dilli Asha Kamgar union.

The health workers earn as little as Rs 3,000 a month and are contractual employees, without the benefits that full-time government employees can obtain. In some states, like Bihar, even the paltry amount that is due to them every month has not been paid in the last few months.