A Multitude of Challenges Facing Women Home-Based Workers in Delhi

Apart from low and irregular wages, there is also the issue of lack of recognition of their the job as ‘work’. 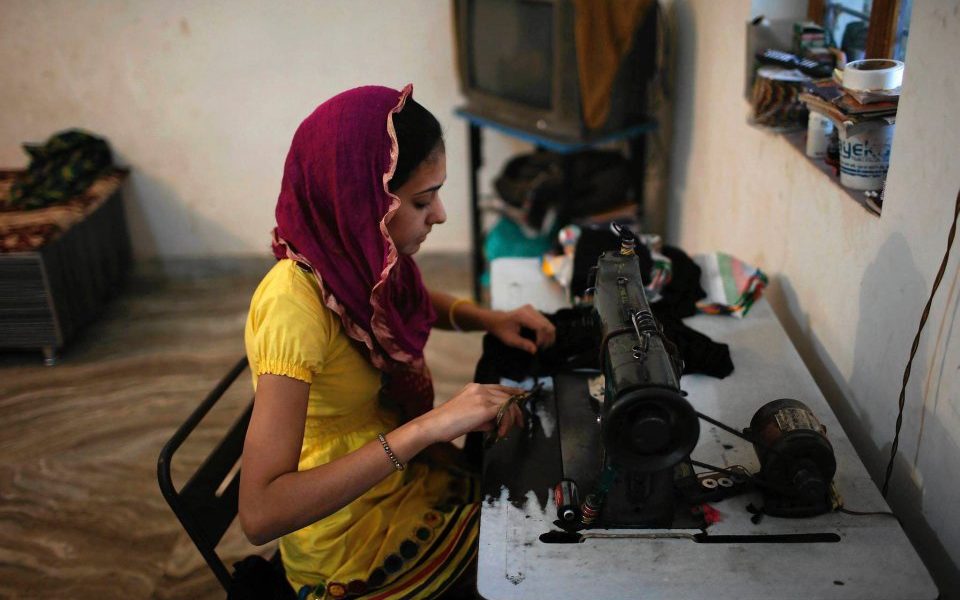 An analysis of 2011 Census data confirms that Delhi has the lowest proportion of working women (25.5%) as compared to any major Indian city. It is often argued that in megacities, the demands on a woman’s time – for care work and allied activities like collecting rations – reduce their participation in the economic sphere to a large extent.

This is also true of Delhi, where migration and limited livelihood sustenance opportunities make women engage in some form of work that pays them and at the same time helps them take care of household responsibilities. The restrictions on women’s mobility, especially for work, on the other hand, force a substantial number of them to opt for low-end home-based work, where the skill required is minimal.

The noted researcher, Indrani Mazumdar argues that there has been an apparent increase in the number of women, men and children engaged in piece-rate wage work in the home-based sector in Delhi. A number of recent micro studies, according to her, have also captured the nature of sub-contracting jobs in the manufacturing sector that transfer the investment costs on to the workers who work in harsh, exploitative and insecure conditions.

Such working and living conditions of home-based workers in Delhi are also portrayed in several other studies which have discussed extensively how the integration of non-domestic activities can inform and broaden the understanding and meaning of ‘home’.

Also read: Until We Properly Define Home-Based Workers, Their Labour Will Be Ignored

Two empirical studies conducted by the Institute of Social Studies Trust across five locations in Delhi to understand the work-related challenges of home-based workers between 2017 and 2018 have revealed that a substantial proportion of them were engaged in very cheap labour. They are engaged either towards creating a finished product to make it marketable or creating an intermediary product that aids the final product. Hence, there remains the struggle for adequate wages and more so for the recognition of their contribution to their family and to the larger economy.

Around 200 women were interviewed from various jhuggi jhopri clusters, kaccha colonies and resettlement colonies of Delhi. The kind of work on which the studies focused included anything from cutting of extra threads from ready-made apparels, packaging of toys, cutting of straps for bathroom slippers, manual fixing of zippers with chains to more intricate, labour intensive tasks of making garlands which required more time and concentration.

Nearly all of these jobs are done at a piece-rate basis, except for the work of fresh flower garland making, where the women work as unpaid family labour. It has been found that home-based workers across all trades could barely manage to earn Rs 25-35 per day, which was much lower than the entitled daily minimum wages of Rs 513.

If we take the instance of strap cutting for bathroom slippers in Savda Ghevra, a minimum of two days is required to finish the straps of 600 slippers – for which a woman gets Rs 40. Thus, her daily earning from this work comes down to Rs 20 – which is just 3.89% of her entitled wages under the Minimum Wages Act. Similarly, a home-based worker in Munshi Ram Bagh is able to earn a maximum of Rs 20-25 per day from thread cutting, which would also equal 4-5% of the daily minimum wage.

If we further compare the hours of work that home-based workers in Delhi put into their monthly income, we realise that the piece rate offered to them is nowhere near the labour that is involved in performing that particular task. With almost 74% of the workers in toy packaging in Kalyan Puri spending an average of 6-8 hours a day on home-based work, their monthly earnings are a maximum of Rs 800-900.

With as high as 60% of home-based workers earning up to Rs 1000 per month and 34% of the total sample stating irregular payment as a major concern, home-based work has been relegated as ‘non-gainful’ work by the women home-based workers during conversations. The reporting about irregular payment was as high as 75% in case of some particular trades like making of decorative items and beadwork. In those cases, the payment is continuously deferred towards an unspecified date and the workers are made to work without any wages.

While on one hand, home-based workers suffer from lack of avenues for negotiation with the contractors/sub-contractors due to the minimal work opportunities, on the other, the income from home-based work serves as a major source to most households in the absence of any stable/regular source of income from casual wage labour that offers men intermittent sources of income.

Thus, it is important to locate both home-based work and the women engaged in such work within the current scenario of declining job opportunities for men on one hand and the burden of care as well as fending for the family on the women on the other to understand the specificities of their marginalisation.

Similarly, they would choose contractors/sub-contractors offering regular payments over those who offered higher piece rates in order to manage their everyday expenses on essential household items like grocery in the absence of any other source of household income. As ‘home’ for them also becomes their place of work, they would also get the children involved to help them with production.

Therefore, work for the home-based worker has to be seen in the light of both – the informal nature of her work and the low skilled cheap labour that does not get her enough support from the family, and hence the continuous denial by self to recognise the job as ‘work’. Additionally, there are challenges that the ‘home’ throws to the home-based worker when it also becomes a ‘place of work’.

Rajib Nandi, Ayesha Datta and Gurpreet Kaur are affiliated with Institute of Social Studies Trust, a voluntary and not-for-profit research organisation based in New Delhi