Unlike the old scheme, government employees are now forced to fund half of their pension themselves. This has caused indignation and sparked widespread protests. 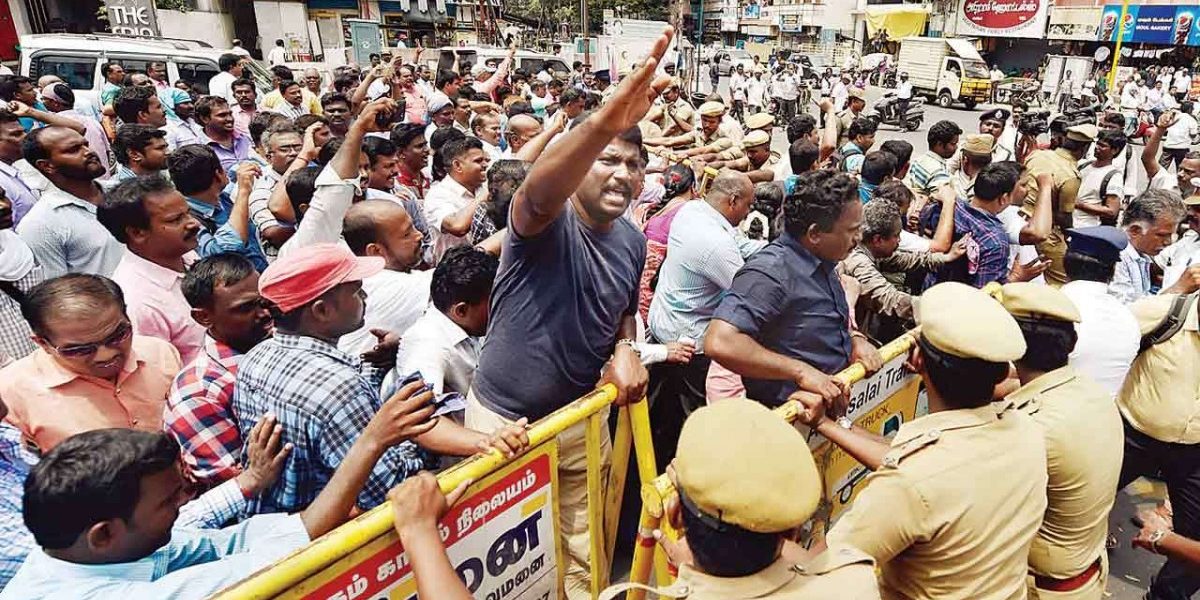 Protests in Chennai against the new pension scheme. Credit: PTI

New Delhi: On November 16, Union minister Piyush Goyal was reportedly hounded out of an event in Lucknow by railway employees. Among other issues, the protesters were angry about the new pension scheme and demanded the restoration of the old system.

Not just Uttar Pradesh, unrest against the scheme has been brewing across the country and often manifests in mass protest demonstrations.

Many of these employees covered under the new contribution-based pension system are receiving as little as Rs 700-800 as monthly pension while the minimum guaranteed amount in the old defined benefit scheme is Rs 9,000. They are now required to pay 10% of their monthly wages which is matched by the government and invested in equity shares. Retirement pensions are dependent on the returns on that accumulated investment.

In the old system, the entire pension amount was borne by the government while fixed returns were guaranteed for employee contribution to the General Provident Fund (GPF). The government pays 50% of the last drawn salary plus dearness allowance (DA) as pension to employees after retiring, and to their dependent family members in case of death.

What is the new pension scheme and how is it different from the old one?

The National Pension System (NPS) is a defined contribution scheme mandatory for all new recruits to the Central government (except armed forces) joining on or after January 1, 2004. All state governments, except West Bengal, have also made it mandatory.

In 2009, the scheme was extended to all Indian citizens from 18-60 years of age, however, the 10% government contribution is only for government employees. An independent Pension Fund Regulatory and Development Authority (PFRDA), set up in 2013, regulates the NPS.

The NPS has two tiers – Tier 1 is mandatory for all government employees and has a fixed lock-in period. Subscribers can only withdraw the accumulated wealth after they retire, i.e., are 60 years old. A recent amendment allows them to withdraw 25% of the employee contribution in case of emergencies.

Even at the time of retirement, subscribers can withdraw only 60% of the total amount, which is taxable, and it’s mandatory to invest the rest 40% to buy a lifelong annuity scheme through an IRDA-regulated insurance company. If they leave the scheme or retire before attaining the age of 60, 80% of the pension wealth has to be invested in the annuity scheme.

Tier 2 is a voluntary account, more of a substitute for the GPF where one can withdraw any amount at any time. The government does not contribute anything in the tier 2 account.

Unlike the pension and GPF in the old scheme, the NPS does not guarantee any fixed returns as it is market-linked.

Teething troubles or discriminatory by design?

Since the NPS covers employees recruited after December 2003 and the age of retirement is 60, most employees are yet to avail the new pension benefits.

On being asked why they were protesting more than a decade after the old scheme was replaced, the employees say they initially had little understanding of the scheme as there were no active efforts to educate them or raise awareness about it.

They were told that NPS was better as the government was also matching their contributions. “Many employees have been protesting from the start but NPS was forced on us nevertheless. Such large-scale movements take time. We were fewer in number and it took time to organise,” Manjeet Singh Patel, Delhi state president of the National Movement for Old Pension Scheme (NMOPS), told The Wire. 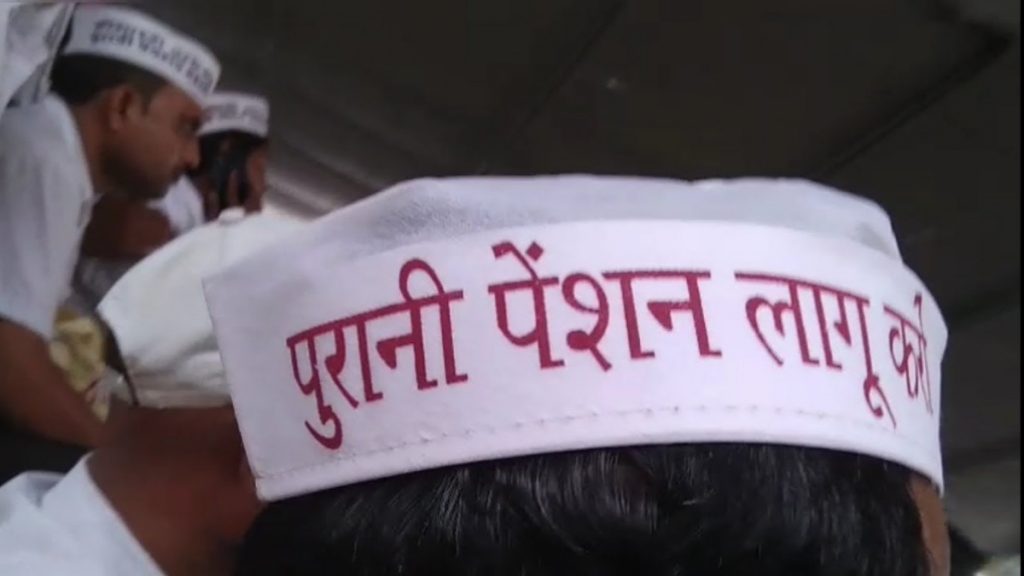 A protest against the new pension scheme. Credit: YouTube

Many experts and supporters of the scheme argue that just like a standard Systematic Investment Plan, long-term capital gains under NPS would be better than before. However, protesting employees argue that for those retiring after 10-12 years under NPS, the accumulated wealth is too less to provide substantial amount as pensions.

Also read: Why the Modi Govt Needs to Re-Evaluate its Strategy on PF Withdrawal Norms

“The total accumulated wealth in my NPS account on retirement was Rs 3.25 lakhs even when I got 13% interest rate on it. After 60% of it was paid to me on retirement, I am receiving less than Rs 700 every month as pension through the annuity scheme,” R.P. Bhatia, a former employee of the Haryana electricity board, told The Wire.

Bhatia was made permanent in November 2006 and retired in 2013. NPS was enforced in Haryana from 2006 itself. He says his colleagues who were recruited not long before him are receiving over Rs 15,000 as pension under the old scheme.

To be sure, employees did not need to contribute anything to avail pension in the earlier scheme. Under NPS, employees have to fund half of their pension themselves.

If they want a GPF-like option where there’s no strict lock-in period, they have to additionally deposit money in the tier 2 account. They say this leaves them with less disposable income and even then, they live in constant anxiety of losing their money in the equity market.

“If the government wanted to encourage us to invest in mutual funds, we should have been educated about it and it should be optional for those willing to risk it. The government is forcing us into it instead of providing a safety net,” Patel added.

Also read: In Jharkhand, the Elderly Struggle For Meagre Pensions

In addition to these issues, government employees from many parts of Uttar Pradesh allege their contribution hasn’t even started being deducted from their salaries. “How will we get returns from the market when our money hasn’t even been deducted from our accounts to be invested,” Ajit Verma, a 32-year-old government employee from Lakhimpur Kheri in UP, told The Wire. He adds that this is the case in many blocks of his district.

Speculative benefits instead of safety net

“The minimum pension amount under the old scheme is Rs 9,000 which has been calculated keeping in mind entry-level minimum wages. Real pension amounts are much higher as nobody retires on entry-level wages. In the new scheme, even those who have worked for a decade are getting as little as Rs 1,000-2,000. This is a disastrous policy,” Tapan Sen, general secretary, Center of Indian Trade Unions, told The Wire.

Sen also alleges that both the Congress and BJP governments, through this scheme, have been using public money to help those who profit through speculation in the share market at the cost of vulnerable government employees.

Clearly defined pension amounts and a safety net in the form of fixed interest rates on GPF were the main attractions for a government job for these employees who typically spend their whole working lives in the public sector.

The current state of the economy does nothing to inspire confidence in these employees as they see their interest rates dip in the aftermath of events like demonetisation and Goods and Services Tax.

“We were told that our money in the market would also help avoid a 2008-like economic slowdown. How are we to trust this logic when people like Vijay Mallya and Nirav Modi run away with thousands of crores of public money? When even our pension fund managers like SBI goes into massive losses?” Vijay Kumar, national president of the NMOPS, told The Wire.

A rare moment of unity among government employees

As word spreads of an organised movement against the new pension scheme, employees from various government departments and states are joining in. Leaders of the movement say this is one of the rare issues that has united government employees from very diverse sectors and geographical locations.

Workers from the banking sector are also lending their voice to the protest. A charter of demands submitted to the Indian Banks’ Association by the All India Bank Officers’ Confederation also demands scrapping of the NPS.

“Either we go to the old scheme or this scheme can itself be converted into an assured pension scheme. We have also given a workaround on how it can be done. If invested properly, it is possible to guarantee assured income. Instead of investing in the market, the fund can be used in lending activities. Retail lending can alone fetch 12-15% interest and we can avoid the whims of the market,” Thomas Franco, former general secretary of AIBOC, told The Wire. Even while suggesting how to ease anxieties regarding market volatility, Franco’s preference remains going back to the old scheme.

Since no concrete action was taken to address their concerns even after multiple appeals to all concerned authorities, the NMOPS has planned to mobilise lakhs of government employees from across India and march to the parliament on Monday.