'Self-employed' workers have seen real agricultural and rural non-agricultural wages slump by 2% and 4% in CY21, according to new research. 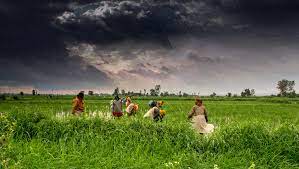 Mumbai: Two-thirds of the total labour force of the country resides in rural areas. It is only natural that their income graphs and progress trajectories define the present and future course of the Indian economy.

Sidelining grave concerns over the plummeting income levels of self-employed labourers has culminated in the current situation, where consumption levels and sales volumes across a number of segments, especially FMCG, have taken a collective beating. Reviving broad-based consumption in the country will be possible only once the real wage levels of rural labourers see a meaningful increase.

Published on April 20, a research note by brokerage house Motilal Oswal provides quite a few reasons to be worried about the lot of the casual labourers. The note highlights how self-employed labourers find themselves at the bottom of the hierarchy of workers. They are pummelled not just by stagnating income levels but also by limited access to credit from banking and other formal channels. Given the lack of institutional support, it is rural labourers who have had to face the full brunt of the pandemic, vis-à-vis any other category of workers.

While salaried or regular wage workers employed with state governments or listed companies have done pretty well for themselves in the past two-three years, considering that they have received 6-7% increment in CY21, self-employed workers, on the other hand, have seen real agricultural and rural non-agricultural wages slump by 2% and 4% in CY21.

A combination of factors – beginning with the slowdown, transitioning into income and employment destruction in the wake of the pandemic and recently peaking in food, fuel and fertiliser inflation – have all contributed to slamming the rural worker on both ends: her real wages have seen dramatic erosion while her expenses have been on the boil, leading to a situation where the standard of living of the rural worker has either remained stagnant or has slipped further.

Not that things were hunky-dory for the self-employed labourer before the pandemic came along. By FY18, a slowdown had started lurking on the Indian macroeconomic scene and was retarding wage growth, employment opportunities and rural consumption.

Between CY15 and CY18, real agricultural and rural non-agricultural wages grew at a CAGR of 1.5%-2%, which isn’t much to rave about but still miles better than the negative CAGR 0.6% and 1.3% registered in CY19 and CY20. State government and listed companies’ employees haven’t had great luck either as the average real growth rate of their salaries in the past three years has been much lower than what it was during CY15-CY18.

There has been a double whammy for self-employed workers. While their income levels have depleted over the years, banks and other formal institutions have taken a step back when it comes to extending credit to them. The note by Motilal Oswal segregates disbursed household loans into three parts – personal loans, agricultural loans and loans to unincorporated enterprises such as proprietorships and partnerships (read: MSMEs).

Personal loans are entirely borrowed by individuals and would represent (a part of) the debt of the regular wage/salaried employees in the country. ‘Agricultural loans’ are also taken by individuals, though they are part of the self-employed category. These two components account for 70% of the SCBs’ total loans to households. The remaining 30% is accounted for by what we call ‘the unincorporated enterprises’, consisting of industrial activities, transport operators, wholesale and retail trade, professional services and others.

Motilal Oswal’s research indicates that banks have preferred to extend loans to the regular wage/salaried workers as personal loans in the past two years. This practice is essentially a continuation of what was happening in the pre-COVID-19 period as well. Meanwhile, the share of ‘agricultural loans’ and ‘loans to the unincorporated enterprises’ has fallen almost steadily during the past decade.

The data speaks for itself: personal loans, which accounted for 41% of household loans in CY14, have gone from strength to strength. These loans surged from 48% in CY19 and further to 51% in CY21. In contrast, the share of agricultural loans fell to 19.4% in CY21 from 24% in CY14, while loans to the unincorporated enterprises declined to 29.6% from 34% during the same period.

This discrepancy is evident in the granular data as well. Since the last quarter of CY19, total household loans have grown by 22%, personal loans have ratcheted by 29% but agricultural loans and loans to unincorporated institutions have been lagging behind at 16% and 15% respectively till Q4CY21.

In a geopolitical scenario marked by conflict, hamstrung supply chains and inflationary commodity cycles, the future could hardly look bright for the Indian worker. However, another brokerage house Prabhusdas Lilladhar sees the Indian agricultural labourer benefitting from the void left behind by Ukraine in the food grain domain.

For Prabhudas Lilladhar, the fall in rural demand has less to do with a collapse in income and is more a reflection of people adopting a “cautious stance for conserving cash in rural India due to severe impact during the second Covid wave”. The brokerage house contends that the Central government had given adequate free rations to a large section of the rural population since April 2020 leading to a situation where overall agricultural output and income were unaffected.

Also read: Social Security For All of India’s Informal Workers is Possible. Here’s How.

The brokerage house expects an uptick in rural incomes in the coming quarters. In fact, the researchers expect a 30% growth in overall profit in farm income from the rabi crop, reaching up to Rs 57,800 crore. This surge in profits, says the Prabhudas Lilladhar research note, will be led by wheat (Rs 30,200 crore), mustard (Rs 21,800 crore) and maize (Rs 5,300 crore).

“Additional income from the sale of stockpiled Kharif crops like cotton, soybean, barley will further add to gains. We did a sensitivity analysis for various price levels and procurement from the open market and MSP by the government of India. We believe that the farmers will make a minimum of Rs 18,300 crore more from this year’s crop and a reasonable scenario of Rs 26,000-28,000 crore and a best case of Rs 36,000 crore-38,500 crore. This can further increase in cases where farmers don’t sell at the time of harvesting and prices move up further. Rural experts opined that post-harvesting of crops and clarity on monsoons, rural demand is expected to bounce back strongly which will kick start another growth cycle in the economy,” the note states.