Digging For Water in Tamil Nadu

It takes months of hard work to find water in Sivagangai, Tamil Nadu. Meet the people who dig wells for a living. 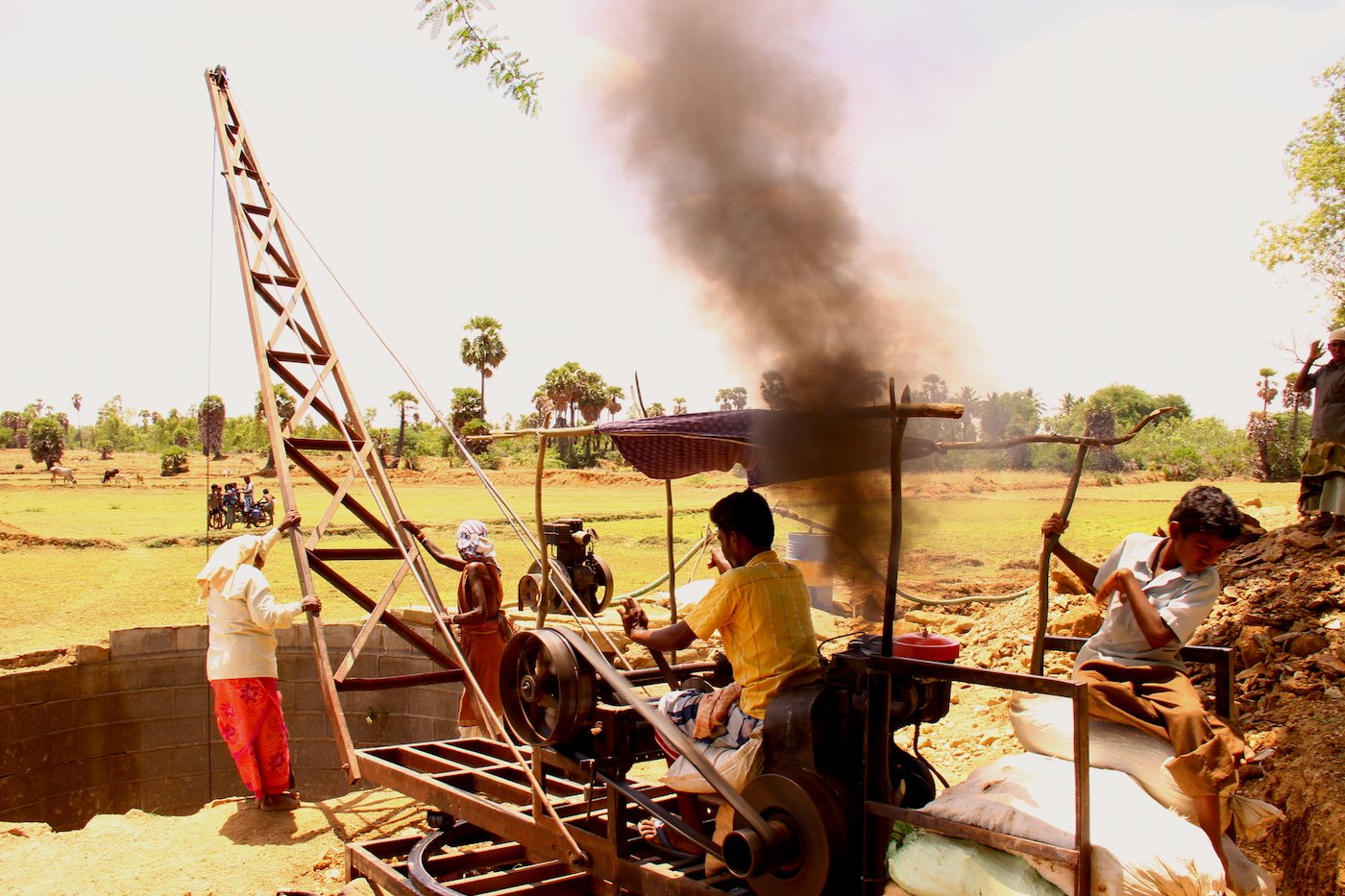 Thangavel is still repaying a loan he took on the crane. It's his only asset, he owns no land, no house – but it has made the family's work a bit easier. Courtesy: PARI

It is an assault on the senses – the heat, the smoke, the juddering engine. But the well-diggers – five men and three women – don’t seem to mind. They hew mud and rock, and heave it up under a mid-summer 40 degrees Celsius sun, because the agricultural fields near Ayyampatti village, Sivagangai district, Tamil Nadu, are thirsting for water.

“About 20-25 years ago, we would get well-water here at 10-15 feet,” says Thangavel, who owns this well-deepening contract. Before him, his father was a manual well-digger and his mother, Sirangaayi, had helped shift the loads of mud by carrying them out on her head.

Sivagangai is a part of Chettinad, famous for its cuisine and architecture. Here, water has always been a problem. Given its location in Tamil Nadu’s ‘rain shadow’ region, rainfall is often patchy and has been distressingly meagre in the last couple of years. Around us, palm trees are dying; paddy fields have turned fallow; the ponds are dry. To get water for agriculture, bore wells go down 1,000 feet; dug-wells are routinely further deepened.

Wearing a baniyan and a muddy towel, Thangavel (hoisted up from the pit in a rusty iron bucket) sits next to his mother, on a mound of sand, and talks about how hard it is to dig a well. But he doesn’t curse; neither do the three women on the site. One is Sirangaayi, his mother. Nobody knows how old she is – she certainly doesn’t – but they say she must be close to 80. Her face is sun-scorched, her shoulders smooth and slender, and she wears a saree in the kandaangi drape. But it is her eyes that are arresting. They are keen and fearless, especially when she stands peering into a 40-feet hole, two inches from her big toe, under the high noon sun that swallows her shadow.

The women’s job is to steer the crane, which hauls up the dug earth in iron buckets. Two push the crane to one side and the third empties the bucket on a hillock of mud. It is certainly not an easy job, but they are happy for work that fetches them Rs 150 for eight hours of hard labour under a relentless sun.

The men make few concessions for the women. There are five of them inside the well – it is 25 feet across, and the contract is to deepen it by 15 feet – and all are hard at work. They prise out big rocks from the mud without any machinery, then tie an iron chain around them and shout for the crane operator to lift them. They watch it all go up, lifting their hatless heads into the sun, and then bend their heads and backs and dig some more.

This goes on for nearly 250 days in a year. Rains stop their work. But they don’t try for other work. “We only know to dig wells,” Thangavel says, sitting outside his house, later that evening. He has bathed and put on a blue-checked shirt. Sirangaayi is hanging their morning clothes on the washing line; she still has to cook and clean. The water source is some distance away. The house has only living and sleeping areas; no toilets. Food is cooked in the open, on a mud stove, with twigs gathered from the forest.

Two other women who work in his team, Pechiyamma and Valli, live nearby. Both wake up before the sun, cook for their family and leave for the work site by 6 am; work starts before 7 am. Both women have two sons each. Valli’s went to school. Pechiyamma wishes hers had; since they aren’t educated, they do odd agricultural or construction jobs.

Thangavel is not educated either. He had gone to school until class I and then gone to work, because his family was poor. His children (a daughter and two sons) are now at school in his hometown, Karur, because his sons are hearing and speech impaired. With their recently-fitted hearing aids, he hopes they will learn to communicate.

Work keeps Thangavel away from his family; in Ayyampatti, he has his machine and his contacts. The machine is somewhat primitive, but efficient. A well that would have taken his father six months to dig takes him only around two months. The machine cost him a lakh and is made to his specifications. It’s his only asset; he owns no land, no house. He’s still repaying the loan he took for the machine. It has a greased turntable that swings the crane this way and that, and yanks up the rope and lets it down into the well; there is an engine that powers the crane that spits clouds of black smoke. But it has made their lives a bit easier and so they take it wherever they go, taken apart, transported on a tractor, and then reassembled.

Thangavel is still repaying a loan he took on the crane. It’s his only asset, he owns no land, no house – but it has made the family’s work a bit easier. Courtesy: PARI

“We get Rs 25 for every square foot, and from that everybody needs to be paid. Sometimes, we make money. Sometimes, we don’t,” says Thangavel. The first ten feet is dug with the machine; then it is crowbars and muscle. Later, it’s lined with concrete rings or blocks by masons. The well can supply two to three hours of water a day. Asked about the job hazards, he lists digging, heavy objects falling on their heads and walls collapsing. Yet, there are children on the work site. Young boys swing on banyan roots and peer into the unfinished well. They finally go home on a moped chased by a dog. “It’s their dog,” Thangavel says, hopping into the iron bucket and going down the well. On reaching the bottom, he picks up a crowbar and breaks open a stone and uses a spade to shift it. There is a brown puddle of water. And a bottle of drinking water.

Sadly, the taps near their homes don’t produce much water; so one man had to fetch a blue plastic pot of water from another place. As soon as he arrives, the men from inside the well come up. They bring their steel tumblers and drink. Then they fill their bottle.

“If you take away all the water, what do we do?” Sirangaayi shouts.

“And what do we do?” One of them shouts back. “Forty feet inside?”

After all, they have to dig a well. For water.

This article first appeared in the People’s Archive of Rural India (PARI) on December 16, 2016.