Without access to markets across the country, the Nishad community of the Narmada river have no place to sell their catch. 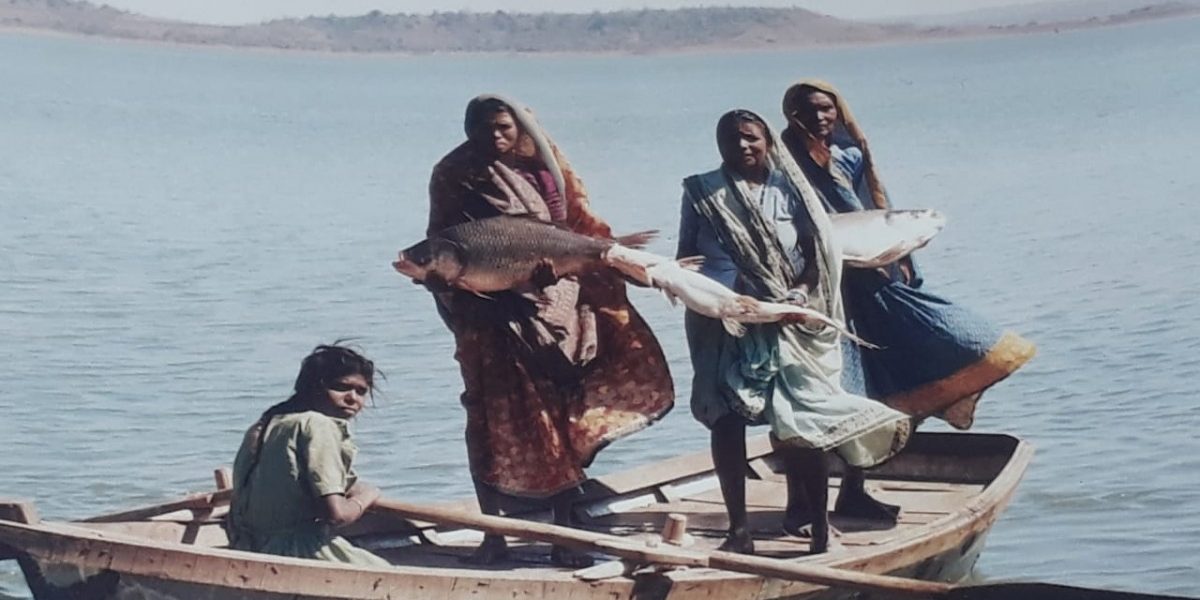 Bhopal: For the past couple of months, the people of the Nishad community of fisherfolk who live and work on the banks of the river Narmada in Madhya Pradesh have been growing and selling vegetables to survive.

The nearly 2.2 lakh fisherfolk have had to turn to small-scale farming because the lockdown on movement imposed in the country to help combat the spread of the COVID-19 virus put them out of work. Though the state government permitted them to catch fish and the fisheries department had even written to other departments on March 31, asking them to allow the transportation of fish within the state and beyond its borders, the fisherfolk found no buyers for their catch.

“The state government issued an order on March 31 that allowed us to catch fish, but the Rajya Matsya Mahasangh (state federation of fisheries) and fish contractors did not begin their activities,” says Munna Barman, a resident of village Pipariya, gram panchayat Khamariya, in Mandla district.

On March 31, the Madhya Pradesh department of fishermen welfare and fisheries development, which is responsible for the development and conservation of fisheries in the state, wrote to the state chief secretary, the commissioner of agriculture production, the home department, the transport department, the cooperative department, the divisional commissioner, the directorate of Matsya Udyog (fisheries), the managing director of the Madhya Pradesh Matsya Mahasangh Limited, the chief executive officers of district panchayats, the superintendent of police and a few others, asking them to allow fish produce and its transportation within the state and beyond its borders. 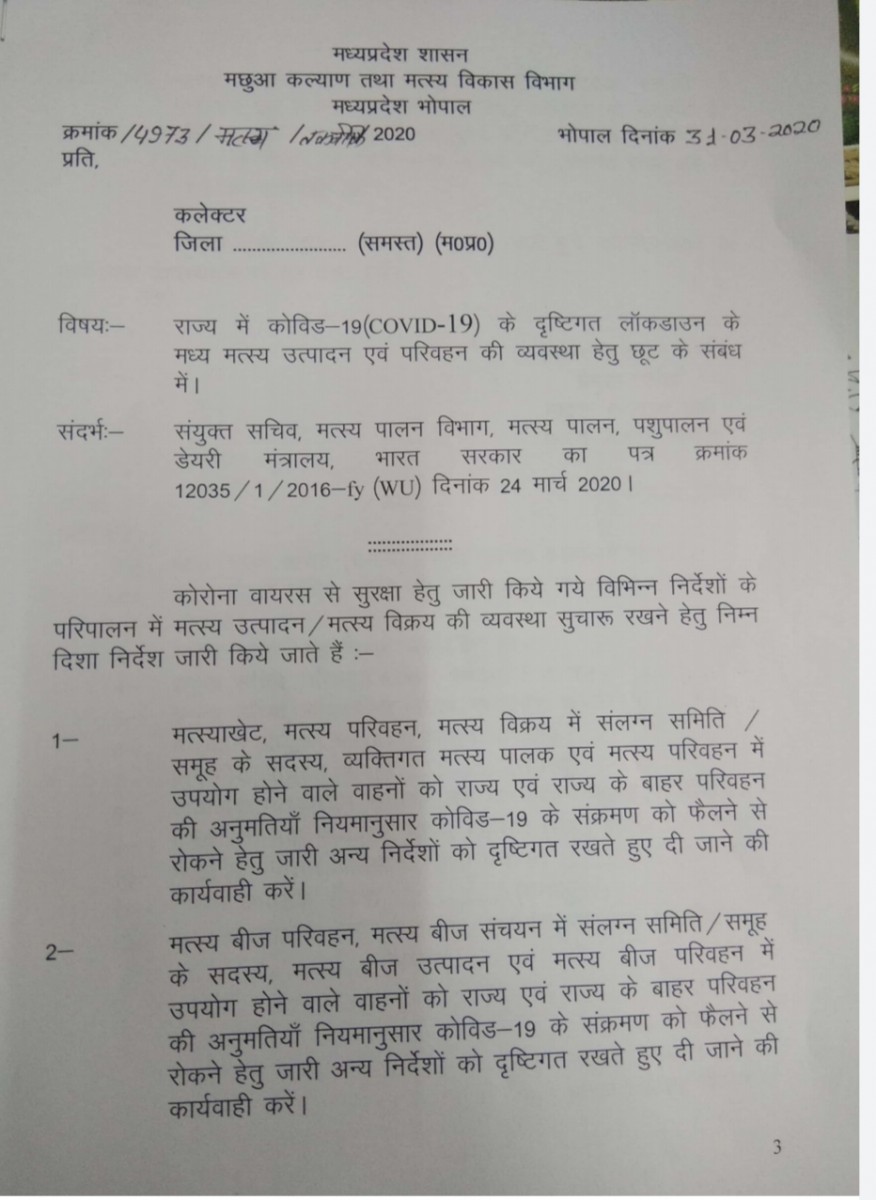 The March 31 order issued by the Department of Fishermen Welfare and Fisheries Development.

However, none of these departments appeared to have paid attention to the letter. Nor did the federations responsible for the welfare of fisherfolk follow up the matter.

“The vast majority of fisherfolk and fish farmers are usually engaged by fish contractors across the state,” says Raj Kumar Sinha of the Bargi Baandh Visthapit Evam Prabhavit Sangh, a federation that represents fisherfolk along the banks of the river Narmada. “This year, the fisherfolk have not been hired by the contractors and samitis, which is totally unprecedented. This is the biggest crisis to hit our fishing industry ever.”

Also read: Workers Who Fled Punjab Weeks Ago Are Now Flown, Bussed Back by Industrialists, Farmers

Madhya Pradesh has nearly 2.2 lakh fisherfolk whose livelihoods depend on the 18 big reservoirs spread over 2,000 hectares of the waters of the rivers Narmada, Betwa, Tapti and others. The vast catch from Bargi reservoir and other reservoirs in the state is usually meant for the markets of Kolkata, Mumbai and Delhi. Without access to these markets, the fisherfolk of Madhya Pradesh are lost, says Barman, who fishes in the Bargi reservoir, one of the first major reservoirs built on the Narmada in the early 1990s.

“The lockdown has threatened our survival,” Barman continues. “We fisherfolk do not have many alternatives in terms of local employment and food availability.”

For Ramesh Nanda of village Kilawad in Mandla district, this has been the worst year in all his years of fishing. Nanda, a fisherman and office-bearer of the Rajeshwari Matsya Sehkari Samiti, a co-operative, says this is because of the uncaring attitude of fish contractors and the Rajya Matsya Mahasangh.

“The lockdown has threatened the future of the community,” Nanda says. “The marriage season is over and the local fish market is yet to open. We have already faced challenges in recent years due to globalisation and industry over-regulation. Now we can’t even fish during the coronavirus crisis.” Like most fisherfolk in the state now, Nanda has been cultivating crops such as melon, tomato, pumpkin and bitter gourds on a small piece of land. “Because the crops were not sown in December when they were actually supposed to have been planted, we have no ready crops to sell. Our families are struggling to survive,” says Barman.

Even when the lockdown eases completely, the community will be unable to return to work, because fishing is not permitted for two months during the monsoon. This fishing ban, under the Madhya Pradesh River Pisciculture Rule, begins on June 16 every year and ends on August 15, to protect the fish stock in the reservoirs during their breeding season. In these two months, the purchase, sale and transport of fish is strictly prohibited. Violation of this rule attracts a fine of Rs 5,000 or one year’s imprisonment according to a provision of the Madhya Pradesh Fisheries Act, 1948.

Though the Rajya Matsya Mahasangh and fish contractors have begun to work with members of the fishing community, opening the Indirasagar and Onkareshwar reservoirs for fishing from June 1 and the Bargi reservoir from June 5, the community feels robbed, says Sinha. He told The Wire: “Even if they work every day till June 16, it is going to be really hard for them to survive. They are very insecure.”

The Nishad community hopes it will be permitted to fish in the Bargi dam and other reservoirs even during the monsoon. They also demand MNREGA cards so they can apply for paid work with their local gram panchayats.