Trade unions all over India protested against changes in labour laws and also slammed the Centre for a "complete lack of sensitivity" over the migrant worker crisis.

New Delhi: Ten central trade unions (CTU) – dominated by unions of the left – staged a one-day protest across the country against the proposed dilution of labour laws in states like Gujarat, Uttar Pradesh and Madhya Pradesh.

Several leaders of the unions were detained by the police in Delhi. Leaders of the ten organisations had gathered at Raj Ghat. “We were sloganeering and highlighting the injustice that this government is doing against labourers across the country. The police then came to detain us. We got into the vehicle as we sloganeered,” said Rajiv Dimri,  general secretary, All India Central Council of Trade Union. 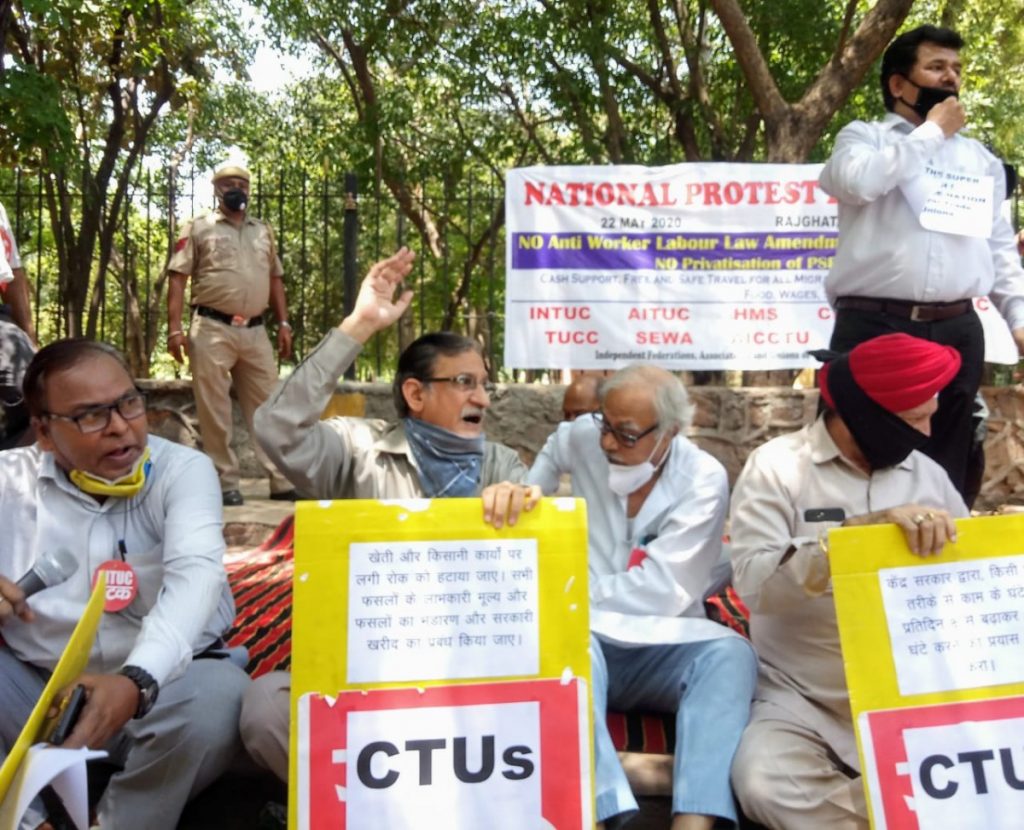 The leaders were detained as Section 144 continues to be imposed in Delhi and the assembly of more than four persons is not permitted. All of them were released at 4 pm.

Workers of the railways, electricity sector, beedi plantations and municipal bodies observed the strike across the country, including hunger strikes in some states like Telangana, Gujarat and Jharkhand. In Bihar and in Allahabad in Uttar Pradesh, protestors clashed with police while marching.

No protest was held in Kolkata due to the damage caused by Cyclone Amphan. However, in north Bengal, tea plantation workers – who have suffered due to low wages for years – joined in. In Delhi, the Anti Malaria Employees Union protested, demanding face masks and sanitisers to be made available for them to perform their jobs. Employees of the Bharat Sanchar Nigam Limited (BSNL) also joined the protest across the country against the dilution of labour laws.

The unions have said that essential services were not impacted due to the protest. “Anganwadi, ASHA were on their duties of door to door visits for screening and making data etc related to COVID-19 despite that they could participate in programmes in several parts of the country,” a press release of the unions said.

The CTUs have also submitted a letter to Prime Minister Narendra Modi arguing against the privatisation of the public sector and other enterprises, as well as the dilution of labour laws. “The extreme cases are those of UP, Gujarat and MP, where almost all the labour laws are sought to be suspended for three years while same is being expanded to other states at the direct instance and insistence of central government,” the letter read. They have demanded that privatisation be stopped and the dilution of labour laws be scrapped.

In the letter, the CTUs also highlighted the plight of migrant workers who have, or are leaving, cities to return to their homes in villages, some even on foot.

“The worst sufferers have been women and children in this process. Complete lack of sensitivity and co-ordination between the Centre and the States in dealing with this gigantic human problem, which is of your own making, due to abrupt decisions without taking into confidence, Parliament, the state governments, political parties and the people who were key in fighting COVID 19, is glaring,” the letter said.

The CTUs have demanded that the Modi government ensure that the workers who are stranded reach their homes, and are provided adequate cooked food. It has also demanded that the public distribution system be universalised – something which has also been argued by top economists Amartya Sen, Abhijit Banjerjee, Raghuram Rajan and Jean Dreze.

The CTUs also demanded that all non income tax paying households be provided a cash transfer of Rs 7,500 per month for three months and has said that the financial package announced by finance minister Nirmala Sitharaman over five days is inadequate to deal with the scale of the problem.