The Life of Labour: Videocon Workers Unpaid for 10 Months; Privatisation of Railway Units 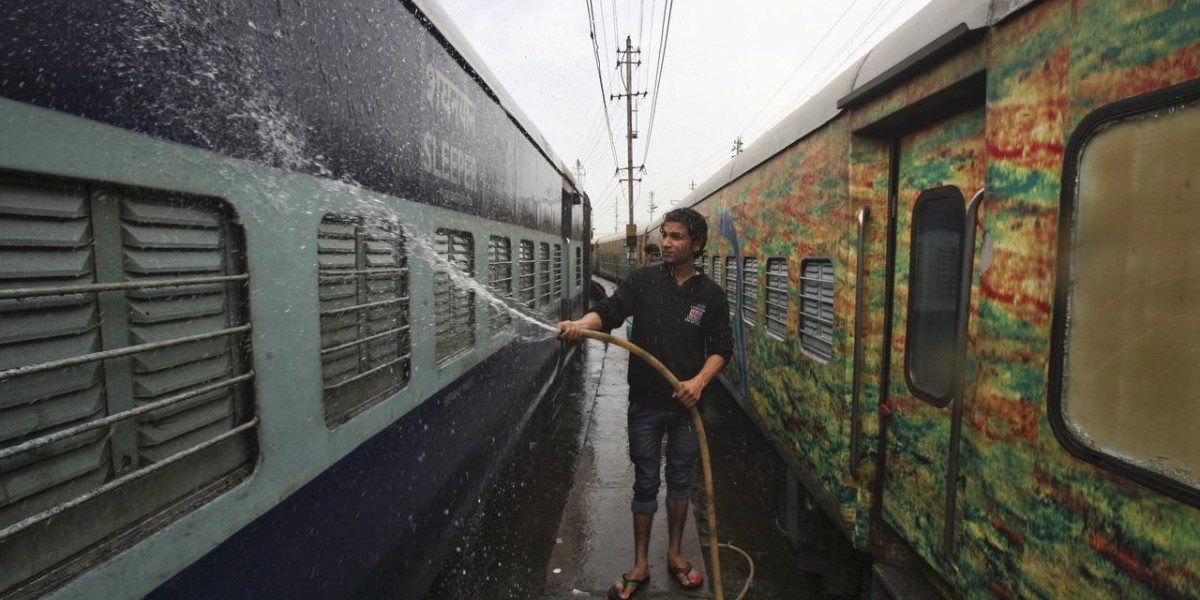 A worker cleans a stationed train at a railway station in Jammu. Photo: Reuters

An article in EPW Engage titled ‘India’s Invisible Women: Can Farmers’ Widows Navigate India’s Agricultural Crisis?’ looks at three papers around the subject of women farmers, specifically those whose husbands have committed suicide due to the catastrophic agricultural crisis that has been plaguing India for years.

In the first paper, they look at how these women have to take up added responsibilities after their husband’s suicide. They not only have to look after their home and family but the farm as well, usually without any outside support. The compensation that they receive is immediately spent, including on the funeral expenses of their husband.

The second paper talks about how the loans taken by the husband are often passed on to their wife. Now, she is in the exact same position as he was – but even more alone.

The third paper talks about how these widows often don’t receive the state schemes meant to reach farmers. This includes crop insurance or medical care. Even mental health services that have been introduced in areas with high suicide rates are often out of reach of these women.

Also, as P. Sainath wrote some years ago, if these women feel despondent and end up taking their own lives, their deaths are not recorded as agricultural suicides, implying that even the astronomical number of deaths that have taken place in India isn’t as high as it should be.

Three people died while cleaning a sewer at a pig farm last week, Newsminute reported. In a recurring sequence that is all too familiar to readers, they were tasked to clean the sewer by the owner who offered no safety gear or precautions. When one of them began to struggle, two more entered to rescue. All three perished. The police say they have apprehended the owner.

While successive governments continue to claim the near end of manual scavenging on the strength of toilet constructions, these deaths continue to happen with alarming regularity. However, the employers seem to learn no lessons.

Two killed, one still missing after being swept by west Delhi drain

Two workers were killed and another went missing after being swept away as the Delhi Jal Board, which had stopped the water flow in the drain for the said work, suddenly resumed the supply.

While the accident occurred on June 28, rescue efforts for the missing worker continue. Over 12 workers had been employed for the task, who also maintain that they were provided with no safety equipment. A blame game has erupted over the accident with the Jal Board pointing fingers at the contractor.

A call for dignity and justice for manual scavengers

At an event on manual scavenging, Harsh Mander said that he felt that public officials should be personally culpable for their failures. “Having been part of the IAS, I know that if I was a civil servant, I have every resource and authority to end manual scavenging, save people from dying of malnutrition and the continued hate violence, in my jurisdiction. So, the public official, in whose jurisdiction these are allowed to continue, should be criminally punished. Otherwise, we can keep on making laws and nothing will change,” he said.

Security guard at IISc Bangalore dies in an accident, two others injured

A 26-year-old security guard at IISc Bangalore died after a newly-installed sliding gate crashed on him. Two other guards, who tried to help him, also suffered minor injuries. The deceased is from Odisha, as was one other injured worker. The third is from Bihar. A case of death due to negligence has been filed against an engineer at IISc along with the contractor.

Activists and organisations working to abolish this practice of modern slavery claim that these numbers need to be taken with some skepticism. They also argue that the definition of rehabilitation is vague. They claim that rehabilitation cannot be merely offering space for bonded labourers in homes, but improving their skills such that they don’t fall back on into ‘bondedness’.

Also read: If India Really Wants More Women in the Workforce, We Need to Think More About Migration

The agrarian crisis in Tamil Nadu may have caused a mass migration out of India. RTI data from external affairs ministry reveals that over two lakh workers have migrated to over 18 countries between 2014 and 2018. A vast majority of these workers do not have graduate degrees, indicating that they are leaving for low-paying unskilled work.

This raises enormous concern given that the 18 Asian and African countries in question do not have strong labour regulation and monitoring. A New Indian Express report captures various dimensions of this issue.

The Tamil Nadu government has issued a notification granting ‘public utility’ status to manufacturers of auto components. This amendment to the rules of the Industrial Disputes (ID) Act, gives suppliers of auto spare parts the same status attributed to essential commodities and services likes water, electricity and public transport.

With this notification coming to effect, workers in these companies will not be able to call for a strike without a long notice period and will have to submit compulsorily to the conciliation process mandated by the ID Act, barring which the strikes will be considered illegal. Recent months had seen a spate of protests and strikes in auto spare parts suppliers, such as Pricol, Asahi, Chowel, MSI and Dongsan.

These, along with a rise in trade unionism in these companies, might have prompted this response from the state government. Auto manufacturers such as Hyundai, Renault Nissan, Ford and others granted similar status even earlier. Factories in SEZs had also been granted such a status. A detailed article about this move and its implications to workers’ struggles was published in Thozhilalar Koodam.

Videocon’s Aurangabad plant on the verge of employee unrest

The 6,000 workers employed at the Videocon plant in Aurangabad have not received their salaries for the past ten months. The plant is mostly non-functional except for intermittent orders that are fulfilled. Videocon as a company is incurring huge losses with banks and creditors lining up to get paid. As Business Today reports, “Videocon’s present market value of Rs 54 crore is just like the price of any sea-facing apartment in South Mumbai.”

Workers have also made their claim for their dues but it’s unclear if they’ll ever get them. Till then, anybody who makes a fuss gets a case filed against them. Apparently, more than 100 employees have had criminal cases filed against them.

Speaking out against the government’s plan to corporatise the railways within their first hundred days in power, workers’ unions have argued that these units are working efficiently and well. Regarding Modern Coach Factory in Rae Bareli, PTI quotes a union official as saying, “Against an installed capacity of 1,000 coaches per annum, the MCF manufactured 1,425 coaches during 2018-19, doubling its production from 711 coaches in 2017-18.”

The union has also argued correctly that turning these operations into corporates does not actually make them more efficient. It could possibly have the opposite effect.

Looking at the Hong Kong protests as an evolution over the Occupy tactics of 2008 and later, the New Statesman identifies the mobile strategy of the protesters as what makes them successful.

“In each case, they would arrive in groups of only a few hundred, flooding the entrances, escalators and lifts, until the government declared the office closed and dismissed staff for the day. Their objective achieved, the protesters would immediately disperse and move on to their next target. With no entrenched positions and an unpredictable and mobile presence, the protesters had effectively made themselves immune to “clearance” and arrest.”

The article is slightly grandiose in its claims but does draw attention to the interesting way that these protests, mostly by young people, have found a way to be so successful.

The rich history of the Indian working class will be woefully incomplete without a discussion of the Bombay Mill Workers and their long and chequered struggle against capital, capitalists and capitalism in the maximum city. The mill workers’ struggle has played a critical role in shaping labour politics in India. As with many historic events, it remains relevant in shaping the politics of the state, and the psyche of the Indian working class even after four decades.

Also read: Unravelling the Build Up to Bombay’s Textile Mill Strike of 1982

In a five-part series published in Ground Xero titled ‘The Strike That Never Ended’, Aarti Kade and Tathagatha Sengupta discuss the long history of the Bombay mills and its workers, the context of the strikes and its resonance in the urban political geography of Mumbai as well as India. This reading of history gains relevance as we witness the phenomenal gains made by Hindutva in electoral politics.

For a city that is reeling under its worst drought in decades and facing the possibility of marking its ‘Zero Day’, it is hard to remember that Chennai had come to a standstill in December 2015 due to historic floods. As the flood waters receded, it was left to an army of workers to clean up the debris left by the rampaging waters. Their stories have been long forgotten, as the city returned to its normal routine.

Writing about the floods, its causes and its aftermath in a recently published book Rivers Remember: The Shocking Truth of a Manmade Flood, Krupa Ge, journalist and writer, also chronicles the efforts of sanitation workers, their travails and the ever-present caste dynamics that have continued to disregard their needs, even as it exploited their labour.

Here is an excerpt from Rivers Remember published in The Wire.