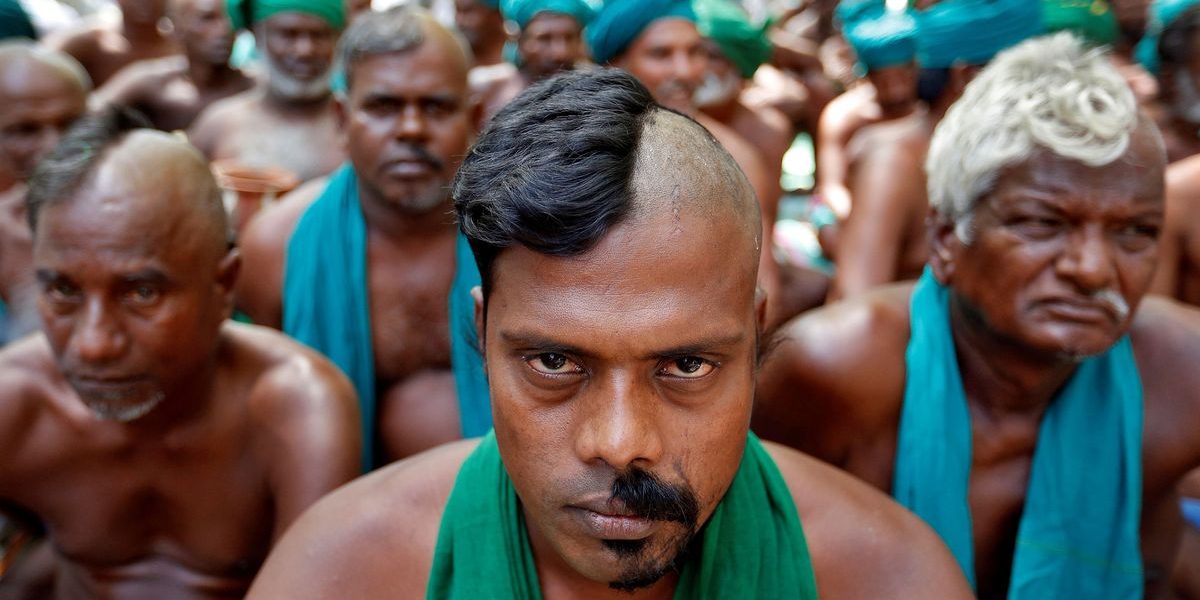 Farmers from Tamil Nadu pose half shaved during a protest demanding a drought-relief package from the central government in New Delhi last year. Credit: Cathal McNaughton/Reuters

Tamil Nadu farmers had led a major protest in New Delhi in 2017 highlighting the depth of agrarian crisis in their home state and the need for the central government to act. But the long protest was largely ignored by the Centre.

Now, the farmers, led by Ayyakannu, have decided to field over 100 candidates against Prime Minister Narendra Modi in Varanasi if the BJP fails to promise farm loan waivers and other farmer protection measures. Speaking to the media, Ayyakannu emphasised that in the previous elections, BJP had promised to double farm incomes but things had only gone south. This unique strategy is being employed to remind BJP of its unkept promises.

More than 50 labourers were freed from a brick kiln in Koppal district. According to the Times of India, the male labourers were purchased for around Rs 50,000 each and women for Rs 30,000 each from Odisha.

On the other hand, the Foundation says that the whole thing is a “disinformation campaign”. While it seems that the labourers have not been paid, it is clear that they are being used by their employer to recover the firm’s dues.

Two housekeeping staff were killed and two others injured when a private restaurant, Pirates of Grill, in Delhi employed them to clean a kitchen treatment plant without any safety gear or precaution.

While the Delhi government recently showcased 200 machines that will clean up the capital’s sewers and end the scourge of manual scavenging, these deaths remind that the goal to end inhuman activities such as these and protect lives of workers, is not merely a technological fix. The senior managers have been arrested under SC/ST Act and the IPC for causing death.

Update on two deaths and many injured outside Vedanta in Odisha

As reported earlier, two people were killed and thirty were injured when CISF personnel charged and attacked villagers protesting outside a Vedanta refinery. The villagers have lost their land  but also accuse the company of operating above the law. GroundXero reports:

“It is still unclear as to how many people have died with locals claiming at least five people having being killed. Angry villagers accused the OISF forces of unleashing brutality on peaceful protestors without any provocation. According to latest reports hundreds of angry villagers have surrounded the refinery gate and are agitating with Dina Batra’s dead body.”

Only Men Wanted: A discriminatory request from Indian Railways

The Indian Railways has sought permission from the Department of Personnel and Training to recruit ‘only men’ for certain posts in the railways. These jobs that include running the trains are deemed ‘tough and unfavourable’ to women.

The department, in justifying its request, has cited the numerous occasions in which women have complained about work conditions in these jobs. This request has drawn criticism from various quarters including unions that claims that instead of finding solutions to the issues raised by women, the railways has asked the women to take up other posts ‘voluntarily’.

This is borne in some of the RTI data, where women have clocked in the low hundred kms running a locomotive, where the requirement is over 70,000 km a year. While the request is unlikely to go through, it shows the institutional intransigence towards resolving working conditions for women and overcoming gender bias.

Women garment workers in Texport Apparels went on protest against a abusive general manager. The issue flared up after a 36-year-old worker complained that the manager used sexually charged slurs against her. The Karnataka Garment Workers Union (KOOGU), that represents the workers, said that the women was verbally abused by the general manager and over a dozen supervisors. The union alleged that they even physically assaulted her for refusing to take orders from them. The woman worker ran away from the GMs chamber. The other workers rallied around her and began to protest.

While the police were initially disinclined to register a case, they finally relented, filing a case of criminal intimidation and sexual harassment.

Sexual harassment is rampant in the garment sector, which employs a overwhelming number of women workers.

Quixotic policies and poor governance leave real and painful consequences for people. Two such policy decisions that have become infamous in the past five years is the attempt to rid ‘black money’ and to revolutionise indirect taxation. Both policies have left Indian workers reeling under the negative effects. Here is a third part in an 11-part series by IndiaSpend, documenting labour market distortions and its effects on workers and the lives. In this part, they explore the condition of migrant workers in Kerala and how the drying up of cash in Kerala’s economy has led to a severe depression in their employment opportunities and wage earnings.

The male workforce shrunk for the first time since 1993-94: unreleased NSSO data

While the government is unwilling to release any data on jobs in the growing the economy, media houses are ploughing through leaked NSSO data to discover that over 4.7 crore jobs were lost according to the 2017-18 PLPS.

In another shocking revelation, Indian Express reported that as per the data, the male workforce shrunk in real numbers for the first time in 25 years. The fall was also steep by over 6.4%. In real numbers, over 1.8 crore jobs occupied by men was lost. The data, along with many other sources, points to a worsening job crisis, across both the rural and urban economies.

While there has been extensive reporting on the loss of jobs in India, few have reported how the unemployed, predominantly rural youth, employ themselves. Here is an article, discussing western UP, that traces the trajectory of many unemployed youth who have joined radical Hindutva organisations. It suggest a direct empirical link between the economic crisis and the rise of violence and mob culture in these regions.

Ayushman Bharat, the flagship national healthcare scheme is an eyewash: Doctors from AIIMS

Doctors at AIIMS, along with many health care experts have claimed that the Ayushman Bharat scheme, launched by the NDA government is a mere eyewash as the scheme is not supported by adequate funding, exposing the lack of intent from the government. They have claimed that the present government has systematically cut down on health care funding leaving the national health mission is severe financial constraint. If primary health care is not offered at affordable and accessible ways, the experts claim, it will overload secondary and tertiary care facilities. Yet even these are being neglected. Instead of supporting these institutions that provide accessible and affordable health care for the poor, the government is ploughing resources into a private insurance dominated scheme.

Union accuses Amazon of breaking US law by firing activist

A union that organises Amazon.com Inc. employees in New York has accused the company of illegally firing one of their members, a fulfillment centre employee named Rashad Long. Long had participated in a protest rally where he criticised the company’s working conditions. This is against American federal labour law. According to Amazon, he was fired for “violating a serious safety policy”. Long says that this is untrue and that he was returning items to a robotic pod which others had done without injury.

Labour rights activist and journalist detained by police in China

Wei Zhili, the editor of ILabour.net, a Chinese website that monitors labour rights was detained by police for ‘disturbing public order’ in Guangzhou on March 20. Another one of Wei Zhili’s colleagues has also not been seen since the 20th of March. The International Federation of Journalists said:

Rail workers in Mali have been on hunger strike since December. The strike has claimed the lives of four workers, two of their wives and two babies. This major action began after the workers’ wages for six months were delayed. ITF railway section chair David Gobe said, “These rail workers are fighting to save the system for everyone in Mali, and have the backing of all ITF transport workers.”