The report also says that since 2011, more than 9 crore people have abandoned farming because of the sector’s consistent decline. The government’s inability to push through meaningful reform means there is an implicit tax on farmers and policies are meant to primarily benefit corporate interests.

Firstpost reported that the woman expressed apprehension that she was “not likely to get justice” from the panel which not only refused her request for presence of lawyer Vrinda Grover during the proceedings but also told her if she did not participate “they would proceed ex-parte”. She indicated that she had hoped for justice from the panel but is now frightened and disappointed that they have not tried to aid her at all.

The Delhi Domestic Workers’ Union has been trying to achieve recognition from the government, but was rejected in 2016. Since then, they have been appealing and have now reached the Delhi high court. A previous Madras high court decision says, “Only persons engaged in trade or business could be allowed to form trade unions, domestic workers do not come within  the definitions of industry or workmen under the Industrial Disputes Act , and domestic work is neither a trade nor an industry.”

But Justice Midha provided some hope when he said that in present times, there was a greater need than ever for the unorganised sector to have safeguards and be able to practise collective bargaining. 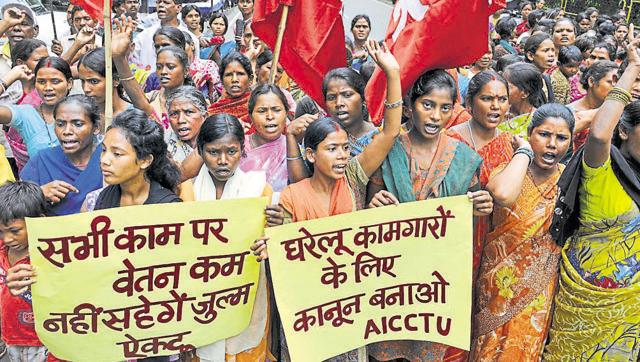 A rally by domestic workers.

In Bengaluru, daily wage labourers struggle to get even 10 days of work a month

In the seventh of IndiaSpend’s 11-part series on informal labour in India’s big cities, the Kurubarahalli neighbourhood in Bengaluru is in focus. Every day, there are 1,000-1,500 workers waiting for jobs, mostly as plumbers, painters, carpenters and masons. One person told the wesbite that before demonetisation, he earned Rs 600 per day, but now earns only Rs 400. Business owners have admitted that they are paying their workers less. Another person told IndiaSpend that there has been a huge drop in sales of bricks since the implementation of GST.

Like China, India also has a gruelling work culture

Jack Ma of Ali Baba made news recently when he discussed the overwork culture, referred to as 996 – 9 am to 9 pm, 6 days a week. A Times of India article says that overworking isn’t new to India’s tech sector. Startups expect their employees to always be available. This includes Sundays, late nights and holidays.

“During the first two or four years, yes, people work six days a week and many a time, for 12 hours daily, or even 14 to 16 hours. But it’s not sustainable,” one person said. “Also, as the company matures, it requires an experienced senior management and industry experts, who are not used to crazy hours. So then one makes more accommodative HR policies. Today, as a nine year-old company, we work only five days a week.”

‘Govt of India is responsible for my death”

Biswajit Majumdar, an engineer, who didn’t receive his salary for the last 28 months, committed suicide and and left a suicide note on his fridge that said “I quit. Government of India is responsible for my death.” Newsclick reports, “Since the Nagaon mill shut down in 2017, three employees have taken their own lives. Since the last 28 months, there has been no salary and have also stopped Provident Fund, pension and gratuity.” The workers have tried everything, according to them, including protests and hunger strikes but nothing has worked.

Adivasi and Dalit labourers of Pindwara have been building temples. On May Day, 400 of them took to the streets of Pindwara’s industrial area. The workers had been trying to raise awareness around the occupational disease of Silicosis. The Wire reports, “According to the Sirohi district’s health department, over 1,650 of these temple-building workers are dying due to a fatal, untreatable lung disease.” Carving of silica-rich stones for temples underway, releasing toxic, super-fine dust. Given the lack of effective safety and dust-control mechanisms in these stone-carving factories, workers end up inhaling large volumes of this deadly dust for 7-8 hours a day. The lethal silica in this dust scars their lungs and rapidly diminishes its capacity to take in oxygen. This leads to Silicosis, a fatal and highly debilitating disease with no cure. Credit: Yuvraj Dhir

Based on annual filings, RTI requests, and e-mails, there were 121 deaths in 33 of India’s biggest companies during the 2018 fiscal year. These include fire accidents, falls, road and truck accidents etc. as the causes of death. In FY2017, there were 96 deaths while there were 120 deaths in FY2016.

Chhattisgarh, one of the least developed states in India, also has a large population of mine workers and farm labourers. In last year’s state elections, the people voted out the three-term BJP government and ushered in a Congress government. This was attributed to the deepening crisis in both the farm and non-farm jobs scenario in the region.

For the general elections, farmers’ and workers’ unions from across the state have united to campaign against the policies of the Centre. They say the Centre has neglected the agrarian crisis and is unable to create quality jobs in the industrial sector.

All major central trade unions barring the Bharatiya Mazdoor Sangh (BMS), affiliated to the Sangh parivar, have campaigned against the BJP-led NDA government. Firstpost reported this as part of its series ‘Election on Wheels’.

Housed at a unoccupied building of the sanitation department headquarters in Ankara, the capital of Turkey, stands a monument to the ingenuity of workers as well as the ‘wealth’ available in what we consider ‘waste’. With over 6,000 books, categorised into various themes and topics, is a library raised by the garbage collectors of Ankara.

Starting as a small attempt to provide books for the workers and their children, it was opened to the public last year. It is managed by the workers, with active support from the municipal administration. With more books being donated, it is sure to become a great source of learning. Here is a report on the library.

The murder of five migrant women workers and two girls by an army officer in Cyprus has revealed the underbelly of the migrant work system even in an economic region with strong labour laws, such as the European Union.

The victims were all migrant workers from Philippines, India and other Asian countries. They had been reported missing, in some cases for over three years. It was the confession of the accused that has revealed the extent of the serial murders.

The failure of the police to investigate the cases thoroughly has led to criticism from migrant workers, and rights organisations. They allege that these crimes expose a certain level of callous approach to crimes where migrants are victims. They also discuss the systemic failure of regulation to protect these workers, who suffer from harsh working conditions and minimum wage violations, yet remain stuck with employers for fear of losing their work permits.

While the Cyprus government has assured an investigation into the police failure. Activists are demanding action to implement labour laws more effectively and create a more conducive work environment for migrants.