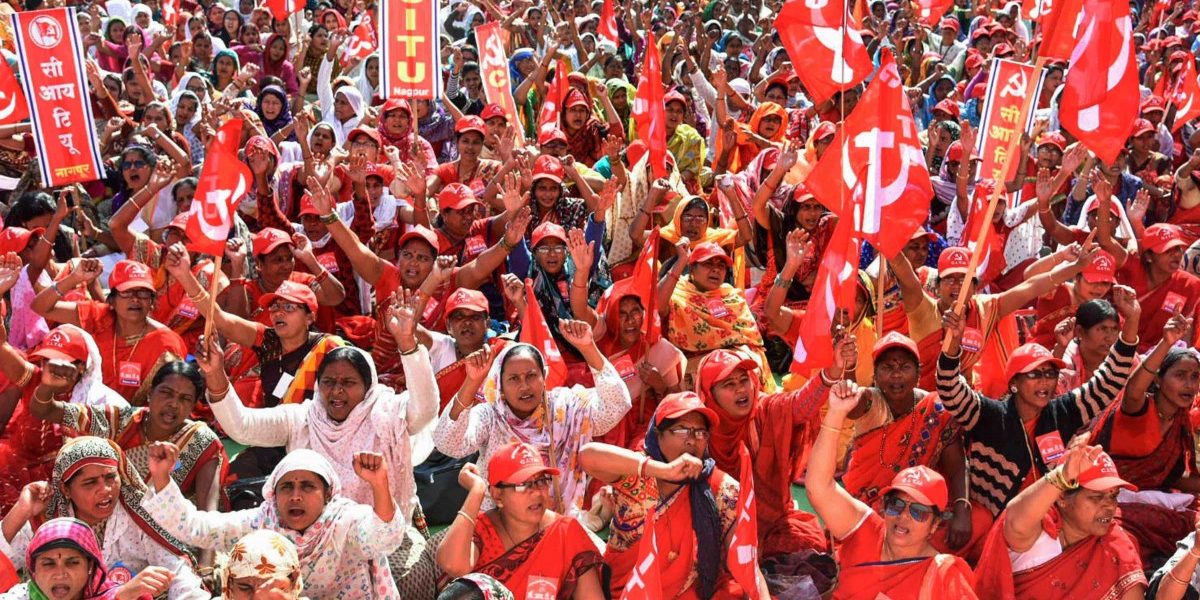 Trade unions and federations across the length and breadth of the country organised a massive strike on January 8-9. The strike cut across sectors – transportation, banking, public services, construction and manufacturing. It included urban and rural workers, even farmers and tea workers.

GroundXero writes: “Despite BMS, the largest trade union affiliated to RSS-BJP which actively worked to sabotage the strike, the first day of action was immensely successful. Nearly 20 million workers and employees participated in the strike.” Not only did the BMS not participate, right-wing media also tried describing the national strike as a concoction of Rahul Gandhi and the Congress.

There were violent clashes in Bengal, with the TMC and the Left at loggerheads. In Mumbai, Brihanmumbai Electric Supply and Transport (BEST) workers were on a complete strike – about 30,000 employees stopped work in an attempt to force the government to save the vital but ailing transport corporation.

This, thus, is a good time to revisit Hussain Indorewala’s great analysis of the mismanagement of BEST. In Rajasthan’s Neemrana, the police clamped down on agitations by industrial workers at a Daikin factory. Multiple workers were injured and had to be hospitalised.

Workers from MRF, Ashok Leyland, SRF Manali and Ennore Foundries, and over 500 people who were at a protest meeting in Ambattur were also arrested. FIRs have been registered against several protesters under IPC Section 143 and Section 151.

The striking workers had a thorough charter of demands, representing the palpable crisis that so many people in the country find themselves in the midst of. The 12-point charter includes the problem of price rise, unemployment, a higher minimum wage, compulsory registration of trade unions, stopping contractualisation of labour and disinvestment of PSUs.

With such a large number of workers making their intentions clear so soon after the farmers’ march, will the Central government blatantly ignore the voices of the people and continue with their pro-rich, pro-corporate policies?

A preliminary report by the Centre for Monitoring Indian Economy stated that “the number of unemployed has been steadily increasing in the country. The number of employed recorded in December 2018 was at 397 million, which is 10.9 million less than the figure of 407.9 million seen a year ago at the end of December 2017,” according to Business Today.

This primarily affected rural areas and women workers. The idea seems to be that as long as the rich get richer, there is no real problem facing the nation.

Independent journalist Manira Chaudhary’s report for IndiaSpend found that various attempts are underway to simply bypass tribal communities when it comes to buying land for mining or public projects.

“These cases are spread across Chhattisgarh, Odisha, Maharashtra, Andhra Pradesh, Himachal Pradesh, Telangana, Uttar Pradesh and Karnataka. Together, these conflicts affect close to 1 million people and are spread over 1,734 sq km,” she wrote.

After news broke that two workers had died in a second illegal mine in East Jaintia Hills, The Hindu wrote an editorial criticising the government’s apathy towards the plights of the miners working in these “death traps.”

These mines are illegal and the ore being extracted is state property. If people dying is not enough, the fact that Rs 3,000 crores have been stolen should trigger some reaction.

Leaving this to the state government is probably not going to achieve much, given that local leaders are likely to be involved in these activities in some form. The Centre has to be the one to take action.

Apparel company Reid and Taylor is in a debt to the tune of Rs 4,000 crores to multiple banks and asset reconstruction companies. The National Company Law Tribunal invited companies to bid and take over the ailing corporate, but despite ten entities expressing interest, no concrete bids have come in.

The tribunal has now accepted the offer from the union to take over the company. Given that no eager multinational was waiting to swoop in, it can be assumed that Reid and Taylor are beyond all salvaging and the union is set up to fail. The union will try hard to save it, fighting for the thousands of workers who depend on the company for their wages.

What lies behind India’s construction boom

The BBC is running a three-part series on the millions of informal workers that make up the heart of the Indian economy. The first part was on scrap dealers in Delhi. In the second part of the series, they speak to construction workers, again mainly from Delhi.

Ever since liberalisation, construction has gone into overdrive and there was a huge boom in the industry that has slowed in recent years – but is still definitely alive. You can just look around and see these sites and the workers who toil to erect these buildings.

This report includes voices of a number of workers, mostly migrants – as is the case for construction workers everywhere. “Each worker is aware of the risks and we get scared when we hear about other workers’ deaths. But we don’t have an option – we have to keep working without safety equipment”, said one worker Ram Bhavan. 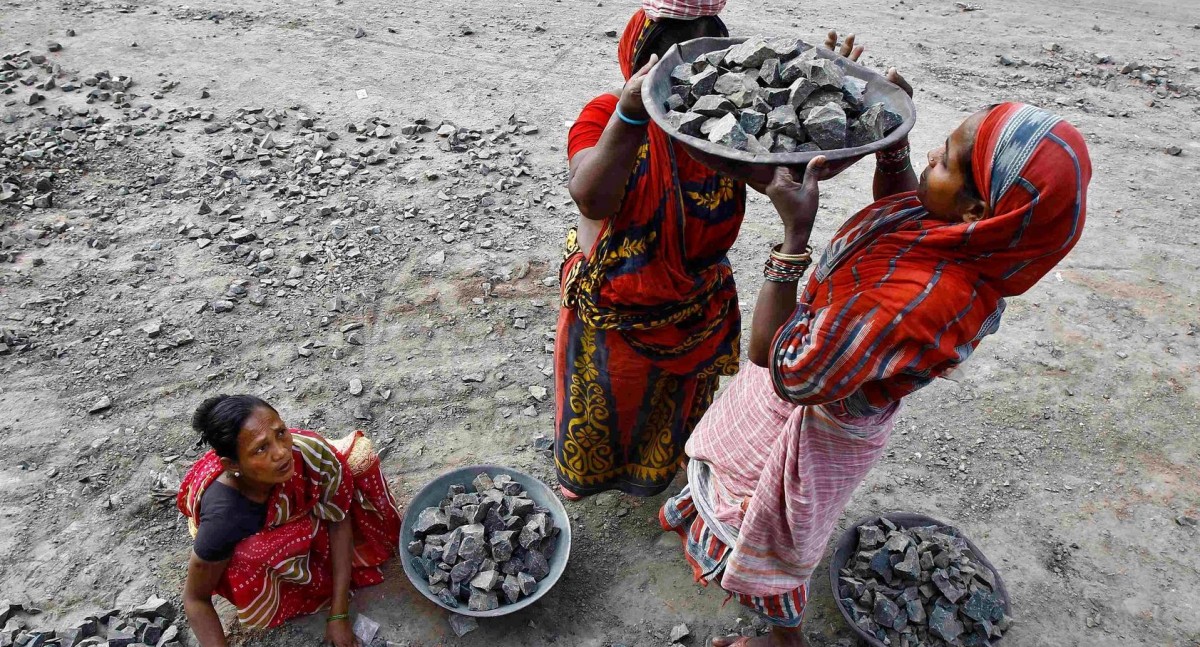 Women labourers work at the construction site of a road in Kolkata on January 8, 2015. Credit: Reuters/Rupak De Chowdhuri

Scroll.in has reported on a study in Madurai that spoke to migrant workers in the city about their mental health issues and the findings are painful to read about. The report states, “unfriendly atmosphere and a life of deprivation adds to the loneliness and alienation, compelling many migrant workers to turn to alcohol and drugs. To avoid raising suspicion, some take to cough syrup.”

“Cough syrup has a soothing effect, so we will be relieved of our worries and will not feel dizzy,” a worker told Scroll.in. The study itself seems to be limited and it’s unclear what specifically can be taken from it.

As a country, we have taken only small steps in talking about mental health among the elite – but we have not even begun discussing how these issues affect the working class.

Migration has been a fact of life for certain communities like Ratnagiri in Maharashtra and Saran in Bihar for centuries, and obviously, sadness is not a recent invention, but modern capitalism has fundamentally changed our relationships with everything around us. We’re comfortable discussing the physical hardships that affect the working class but mental anguish is not something we talk about enough. We do not have the vocabulary for it to some extent.

In October 2009, Thailand’s Khao Tao railway station witnessed a train derailment that led to seven deaths and left many injured. When the State Railway Workers’ Union of Thailand (SRUT) organised a nationwide rail safety campaign based on investigations which revealed that the accident was caused by unsafe and poorly maintained condition of the train, union leaders were punished.

The criminal court imprisoned the train driver and directed him to pay damages to the families of the deceased.

Several union leaders were dismissed and had charges filed against them by the Thai government for highlighting unsafe working conditions. Though some workers were reinstated after national and international campaigns acting in solidarity with them, not all have been given back pay. In March 2018, the Thai Supreme Labour Court ordered seven union leaders to pay damages amounting to 24 million Baht (close to Rs 54m).

Unions in Hungary have called for a nationwide strike on January 19 to protest changes to the labour laws that are being seen as the instalment of a ‘slave law’.

According to the new law, employers can demand up to 400 hours of overtime work from employees. Last month, about 10,000 people gathered outside the parliament building to protest this law.

On January 8, the third day of protests by garment workers in Dhaka, Ashulia and Uttara in Bangladesh to demand higher wages, protesters were attacked by Bangladeshi police using rubber bullets and tear gas.

Twelve factories have been shut, with 5,000 workers blocking a national highway and several tens of workers being injured in the clashes.

Lilabai works 19 hours a day in her village Phalode, doing various kinds of work so she can provide for her family, including cooking at an anganwadi for Rs 1000 a month. Phalode in Pune district has no water for four months a year, making one of her tasks walking two kilometres to a well.

At 40, she makes the walk to the well with her family of nine children about four times a day, starting at 3 am. Read her account of her work day, and week, as told to Minaj Latkar.

In Kerala’s Muzhappilangad village, Muhammed Shafi works as a construction worker during the day, and translates Tamil Literature into Malayalam by night.

In the last ten years, he has translated 11 novels, four story collections and essays, and has been given an award for translation. He still continues to work in construction because, in his words, translation “will not help me run a family…My daily toil at the construction site is my bread.”

Anne Helen Petersen, writing for BuzzFeed News, says, “the more work we do, the more efficient we’ve proven ourselves to be, the worse our jobs become: lower pay, worse benefits, less job security. Our efficiency hasn’t bucked wage stagnation; our steadfastness hasn’t made us more valuable. If anything, our commitment to work, no matter how exploitative, has simply encouraged and facilitated our exploitation. We put up with companies treating us poorly because we don’t see another option. We don’t quit. We internalise that we’re not striving hard enough. And we get a second gig.”

Note: The next issue of Life of Labour will be released on January 16, and every Wednesday thereafter.